Read more
You are at:Home»Culture»Art»Graffiti: Street Art or Vandalism?
By Georgie Holmes and Katie Evans on July 29, 2020 Art, Culture

The age-old debate surrounding graffiti is to do with whether it’s art or vandalism. Often the two intertwine, as some graffiti is so obviously completed by an individual/individuals who have a good eye for colour and design. But, however much some graffiti looks pretty, it’s understandable why some consider it as vandalism.

Take Banksy, for example. His recent piece on the London Underground sparked much debate concerning the necessity of it. It portrayed a good message, named ‘If You Don’t Mask, You Don’t Get’, but was removed accidentally by Underground cleaners.

The removal, however controversial it was, was necessary. Even though the piece was fantastic and represented all that Banksy is known for, portraying a brilliant message of the importance of wearing a mask, it being removed was necessary to maintain safety (cleanliness of the Tube in a time of a pandemic) and the general message that vandalism is not acceptable, especially on public services.

After all, if Banksy is allowed to graffiti on crowded public places, what limits are there for others? If ‘If You Don’t Mask, You Don’t Get’ remained, it would likely inspire others to graffiti, and there’s no stopping them from plastering obscenities or offensive images across these services, which tens of thousands of people use every single day.

It’s understandable that graffiti is sometimes considered art – it does take skill, after all. But there are so many other ways to create art that won’t leave potential damage to public and private property or services. What’s wrong with painting a canvas? Or graffiti-ing on your own property, rather than on public places?

There are other ways to portray important messages, too. It doesn’t have to be in the form of graffiti. Social media plays an incredibly important role in this, where morals and messages can be spread easily, reaching many people, without having to vandalise anything.

Over the past few decades up until the current day, there’s a culture in the UK where the majority of individuals look down on the act of graffiti. It is a relatively new form of “art”, and there are too many examples of it being obscene, ugly, or offensive, and so these are the images which enter people’s minds when asked about graffiti.

Some of it can be even unwelcoming or unsettling. If the world was covered in graffiti everywhere, it’s hard to imagine where beauty would be found. It’s impossible to please everybody, and a piece of graffiti will never, ever satisfy the masses. And if it offends one group of people, or even one person, it’s safest to take it down.

Playing the devil’s advocate here, graffiti is, plain and simple, vandalism. Though there may be a small minority of it which presents a good message and is pleasing to the eye, like Banksy’s, the fact is that there is much graffiti that ruins property, whether it be ugly or destructive. And if one remains and the other is scrubbed away, the line between what is “acceptable” and what is “unacceptable” becomes extremely blurred.

Just two weeks ago, the infamous British street artist Banksy, known across the globe for his politically charged artworks, showed off his most recent artistic endeavour on his Instagram page through a short but influential 60-second video. The video depicted the process behind his work and the creation of several spray-painted murals, using his rat ‘trope’ to focus on the current debate revolving around the new UK law; face masks/coverings must be worn whilst inside shops and on public transport at all times. The rats in the image are all wearing surgical face coverings apart from one individual rat whose germs are seen to be splattered across the train carriage. Banksy captioned the video ‘If you don’t mask – you don’t get’, but soon after releasing the video, the artwork was taken down due to the London Underground’s anti-graffiti policy. 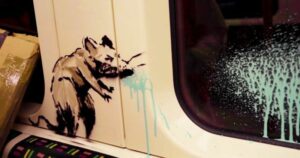 Banksy’s underground transformation has resurrected the common debates surrounding the position of ‘Street Art’ as either art or vandalism. It is difficult to pinpoint street art amongst other forms of art due to its heavily unofficial nature. In reality, street art which falls into the realm of graffiti and ‘tagging’ (minimalistic graffiti that is done on private property and public places) could be considered vandalism, therefore making it a criminal offence. However, there is so much more to the world of street art that people quite often brush away as the artform is considered unsightly and offensive.

Growing up in the Midlands, I quite often visited the centre of Birmingham, a place called ‘The Custard Factory’. Having been a fan of all art forms since a young age I was instantly drawn into the overpowering location of which is filled wall-to-wall with beautiful street art of all levels; both professionalism and creativity. It is important to note the political power and importance that street art can hold on a separate level to the incredible skill that is depicted throughout different pieces. Across the UK it is easy to see street art. For example, crossing the street in a busy city you are likely to see some form of art whether that be a small symbol or a giant mural that takes up the whole side of a building. Locations such as Shoreditch in London and the Northern Quarter of Manchester quite often commission artists to add to the already vibrant nature of their vibes such as Berlin-based artist ‘Dave the Chimp’ and impressionist ‘Jimmy-C’.

In recent years, political activism has become even more entwined with street art and sometimes we even forget that street art holds equal importance to the power of both social media and word-of-mouth messages, as we subconsciously educate ourselves on issues whilst appreciating work of artists as we walk down the street on the daily. In Birmingham, street artist Mohammed Ali used his knowledge of the medium to create a series of stencil paintings that incorporated the line ‘I Can’t Breathe’ in the wake of the horrific murder of George Flloyd in America whilst the Black Lives Matter protests occurred across the globe. 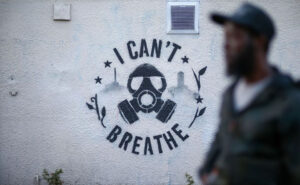 Street art has been used from the 1990s and continues to be used to highlight more current affairs, ranging from Barak Obama’s 2008 presidential campaign in which Shepard Fairey designed the memorable ‘Hope’ poster, all the way to the simplistic stencils created by unknown artists whose works explore the socio-economic issues of their hometowns from that of small towns to huge cities. Street art with always be an influential form of art, but will always arise questions of vandalism and crime due to its legacy.