Read more
You are at:Home»Culture»On Edge: Anticipating The Man in the High Castle (Season 3)
By Christian Wise on October 2, 2018 Culture, Television

This article contains significant spoilers for season 2 of The Man in the High Castle. Read on with caution.

“What if the allies had lost World War Two?”

This is a question that many have asked hypothetically at some point, and in 1962, Philip K. Dick put pen to paper and created his idea of what such a world would look like. Three years ago, Amazon teamed up with Frank Spotnitz and Ridley Scott, and brought this vision to the screen; the end result was an astoundingly brilliant programme. Fantastic world building, an engaging storyline, and a cast of well-developed characters, brought to life by exceptional actors, The Man in the High Castle was truly exceptional. 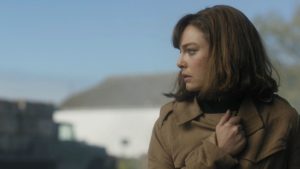 Many of the characters were left in questionable situations at the end of Season Two: Frank (Rupert Evans) seemingly blew himself up in an attempt to destroy the Japanese high command; Joe (Luke Kleintank) found himself being taken into custody after his father’s plan to trigger a war between Germany and Japan was foiled by John Smith (Rufus Sewell); meanwhile Smith’s son Thomas (Quinn Lord) handed himself over to the authorities to be euthanized; most significantly, the resistance gave Juliana (Alexa Davalos) proof of the existence of other dimensions by reuniting her with her half-sister Trudy (Conor Leslie), who we saw being killed by the Kempetai in the pilot episode. With this in mind, what can we expect from the next season?

From what we can see, the third season looks to be more focussed on the sci-fi element of the story, which has only been briefly touched on previously. Tagomi (Cary Hiroyuki-Tagawa) spent a good portion of last season travelling to an alternate version of 1962, specifically our reality, using that opportunity to make amends with his family, and find a way to prevent nuclear war in his world. With the arrival of a Trudy from an alternate reality, it looks like Juliana will learn more about alternate dimensions, presumably under the tutelage of the eponymous character (Stephen Root). The official synopsis for this season also states that Juliana and Tagomi will be spending a lot of screentime together, which makes me wonder if Tagomi will inform Juliana about their relationship in our timeline. I really enjoyed the pairing of these two characters in both seasons, and I’m looking forward to seeing how their friendship progresses.

Juliana and Tagomi won’t be the only characters exploring alternate timelines. In an exclusive clip released last October, it seems the Nazis are also becoming aware of the existence of the multiverse, and are seeking a way to construct a means of interdimensional travel, which the official trailer seems to confirm. Heusmann may be incarcerated, but the Nazis are still an opposing force to our characters, and by the looks of things they’ll only be getting more dangerous this season, especially now Heinrich Himmler seems to be in command. Smith’s reaction during the aforementioned clip may hint at his arc for this run; given his newfound position of power (he’s referred to as Oberst-Gruppenführer in the clip), he’ll likely be made aware of what has happened to Thomas. Could he use these experiments to find a way to seek out another version of his son? Will he help the Nazis achieve a greater level of power for the chance to reunite his family?

We can expect a fair amount of worldbuilding during this season, something that was somewhat lacking from last season. Jason O’Mara (Agents of SHEILD) has been cast as Wyatt Price, a hustler who lives in the lawless Neutral Zone (not properly seen since early season one), and whose rigid beliefs in America’s former values will likely bring him into contact with Juliana’s attempt to incite revolution against the Fascist governments ruling the country, and allow more depth for that section of America (on a side note, it’s a bit weird to see Juliana working with the Resistance again given their interactions last season, but I guess we’ll see how that turns out). Elsewhere, FBI director J. Edgar Hoover and American Nazi Party leader George Lincoln Rockwell are poised to make appearances this season (although presumably in different positions to their real world counterparts). An official synopsis suggests they’ll be working against Smith, so the political element of the previous seasons will likely remain in place for this season too.

By the looks of things, the stakes have been raised even further, with the trailer showing threats of all out war on the streets, lots of personal conflict for Inspector Kido (Joel De La Fuente), a passionate kiss between Joe and Juliana (oh YES!) and an interesting shot of a nuclear explosion (oh no?). We can anticipate lots more of the intelligently written drama and complex characters that we’ve come to expect from this show.