Read more
You are at:Home»Culture»Review: Gone Rogue’s ‘The Time Machine’ at the Edinburgh Fringe
By Ellie Brain on August 18, 2018 Culture, Theatre
100%
100
Excellent

With a tightly knit cast that exhibit huge amounts of energy through their use of physical theatre and puppetry, ‘The Time Machine‘ is a triumph and an absolute must-watch.

There are certain preconceptions that come with seeing a piece of theatre that has already been made into not one, but two incredibly well-known motion pictures. Kaustubh Sameer, the writer, director and producer, had a huge task when transforming The Time Machine from a novella into an original piece of theatre, but he has done so in a creative and thoughtful way. Special mention must be given to the production team as a whole, as the props, set and costumes were incredibly versatile and even in the more difficult technical moments, comedy was used effectively through the breaking of the fourth wall. The time machine itself was creatively constructed, and each part of it had a different purpose throughout the play; particular mention must go to Sameer, and William Shere, the other director and producer, for the design and building of the machine. H.G. Wells’ iconic novel and the film adaptations are all told in slightly different ways, and the same can be said for this theatrical version. It tells the story of a scientist and inventor who is acutely interested in time travel; he then uses his machine after great personal tragedy to try and find answers to solve his grief, and along the way is shocked by the destiny of humanity.

From the moment you enter the intimate venue, it is as if you are walking into the Victorian era, with some of the cast guiding you to your seat as part of an interactive experience. From there, it was a pleasure to watch the cast interacting so confidently and assuredly, every performer was slick and sure of their role – some of the physical theatre elements required a lot of strength and difficult movement. Physical theatre in such an iconic tale may have seemed unusual, but for me it felt completely necessary; from the depths of the earth that the Time Traveller climbed, to the realms of time and space he travelled, the physical theatre was ingeniously choreographed. In this case, I find it difficult to give specific credit to a particular cast member, as each individual shone both individually and within the group. However, I must firstly praise Alex Hill on his role as the Time Traveller; he brought a fascinating passion and intensity to the role. This was then combined with the woman he pined after, Elizabeth, and subsequently Weena, played by Olivia Krauze. Her versatility as an actress brought a gentleness to Elizabeth and an innocence and curiosity to Weena. Mrs Watchett’s role as the narrator-cum-housekeeper, played by Flo Gault, wove the story together very well, and I found her captivating and engaging.

In The Time Machine, the real beauty was in the detail. It was apparent that a huge amount of time and energy had gone into creating this piece of theatre. The puppetry and physical theatre elevated the play, and once again made great use of the space. The language that was created for the Eloi – Romance, Germanic and Slavic – showed the dedication of the cast and was an impressive addition to the story. It was a shame that the original music composed by Tom Inkpen and James Grantham was fairly quiet, as the bits I did hear were very atmospheric and brought the scenes to life. However, it is fair to say that this was just teething problems and will be adjusted according to the space as shows continue this week and next.

It is rare for me to see a piece of original theatre that is so well constructed, yet at the same time is completely aware of its own limitations and space restraints, but The Time Machine does so with a confidence and professionalism that is impressive for an amateur production.

If you are up at Edinburgh Fringe Festival, tickets can be bought for the show, here. 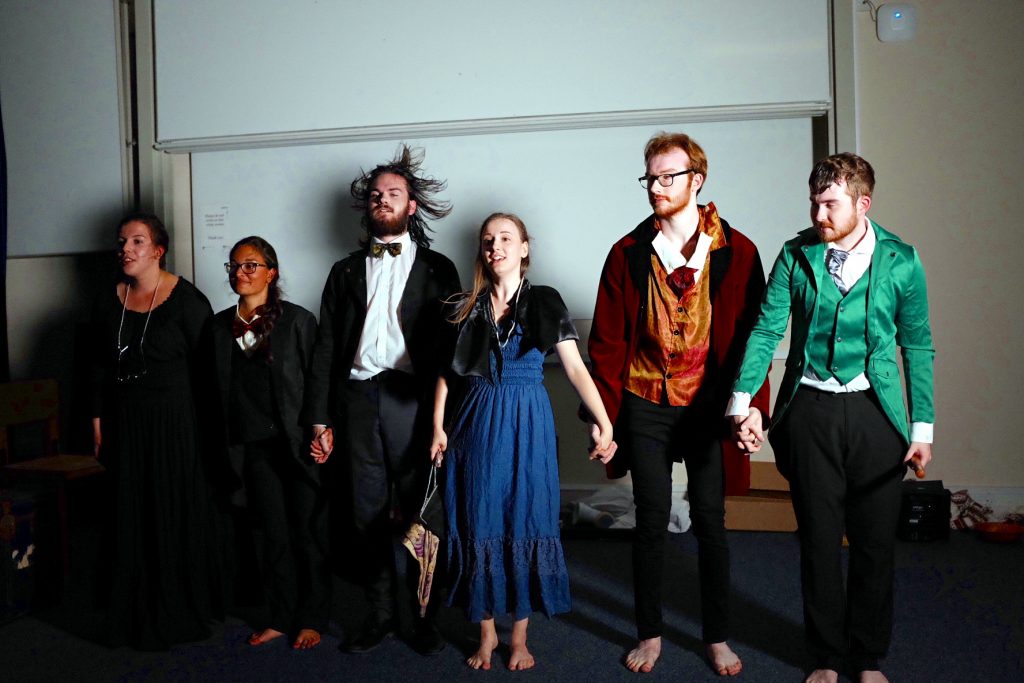