Read more
You are at:Home»Culture»Review: The Shadow Factory at NST City
By James Barker on February 16, 2018 Culture, Theatre
80%
80
Ambitious

As Nuffield Southampton Theatres celebrates the opening of a stunning new venue, its team could not have picked a more fitting debut than The Shadow Factory. Acclaimed playwright Howard Brenton pens a love letter to Southampton in this complex yet clever play; from its exploration of ’40s Southampton to nods at the infamous Soton/Pompey rivalry, The Shadow Factory is a work that keeps its focus firmly on setting.

In Autumn 1940, Southampton is home to the Supermarine Spitfire; a glimmer of a hope in a war Britain is losing. Following the destruction of the Spitfire Factory, the government – led by the shadowy Lord Beaverbrook (Hilton McRae) – begins requisitioning businesses across the city to establish ‘shadow factories’ where their planes can be made covertly. Its a move met with some resistance; whilst the affluent Lady Cooper (Anita Dobson) opens her doors, working man Fred Dimmock (David Birrell) takes a stand against the loss of his livelihood. With the story constantly switching between a country house, the war rooms of London and a laundrette, The Shadow Factory is forced to think creatively in its approach to setting – and adopts an admirably minimalistic aesthetic. 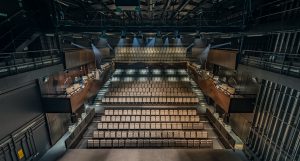 A large harsh slab of cement greets the audience on entrance to the theatre. There’s no curtain to hide it; no props to soften it. With the stage positioned at the centre of the auditorium, NST City instantly offers a stark contrast to Nuffield’s original venue (now rebranded as ‘NST Campus’). But as the play unfolds on this unconventional surface, the versatility of the space quickly becomes apparent. The projections of old maps onto the stage to set the scene is a bold move, one that might fail for those less familiar with Southampton; however, as a play firmly rooted in setting, the gamble pays off. The experience is pulled together by a mesmerising piece of lighting suspended above the auditorium, which transforms the scene from a bombed factory into a grand drawing room within seconds.

The first act feels a little overly ambitious at times, with scenes set in London an unnecessary addition to the narrative. But things tighten for the second act, focusing in on the tumult of the Southampton residents and allowing an impressive ensemble to shine. The cast of just seven feels small for the sheer size of The Shadow Factory, and the doubling-up of actors as multiple characters again slightly muddies the water – however, all performances should be heartily commended. Lorna Fitzgerald shines in her first role post-EastEnders, capturing the raw grief of Jackie Dimmock with the prowess of an experienced theatre actor. While Fitzgerald’s scenes are the most emotional, David Birrell is standout as Jackie’s father Fred. He switches effortlessly between humour and drama, allowing the audience to empathise with the misguided fight to protect his business. Anita Dobson is the piece’s crowning glory in both her roles, offering cantankerous humour as ‘Ma’ Dimmock alongside thought-provoking wisdom as Lady Cooper. The community ensemble add a musical touch to proceedings, choreographed impeccably and shining with powerful vocals. 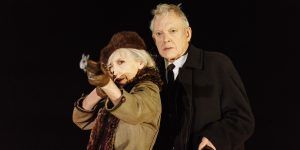 The Shadow Factory falters a little with Lord Beaverbrook, a machiavellian government minister pulling strings behind the scenes. Hilton McRae is a powerful presence, particularly alongside Anita Dobson, but his pursuit of Polly (Shala Nyx) feels uncomfortable and a little unnecessary. A morally complex government official is a risky inclusion in this otherwise community focused narrative, and while Brenton resists full-on villainy when writing Beaverbrook, his scenes do result in the occasional uneven moment.

But the show triumphs in its refusal to play safe; like the projections that dance across its stage, The Shadow Factory succeeds in putting NST City firmly on the map. Samuel Hodges – director of both NST and The Shadow Factory itself – showcases Studio 144’s £30m arts venue as the most flexible and inventive theatrical space Southampton has ever seen, a brilliant alternative to the conservative spaces of Campus and the Mayflower Theatre. As NST City takes its place alongside John Hansard Gallery, City Eye and the O2 Guildhall, exploring the arts in Southampton has never been more exciting.