It's the calm before the storm, in what's probably the best episode of the season yet.

The second season of Stranger Things has been on quite a hot streak for most of its run, and ‘The Spy’ continues the high standards set by the season thus far. The episode continues the season’s trend of taking it slower and allowing the plot to develop gradually. This time, we see the slower pace allow for some critical character development and changes to the status quo, before ending on a doozy of a cliffhanger.

One such development was something that many of us, myself included, were waiting for: Nancy and Jonathan finally hook up! Conspiracy theorist Murray definitely saw through the pair’s stories as quickly as we did, and after some grumbling about his statements (that reminded me of a similar scene from Indiana Jones and the Temple of Doom), it led to the kiss that had been coming since the first moment the pair had together last season. It’s a lovely heart-warming moment, though one that I feel may lead to some consequences further down the line: I can’t help but wonder how Steve will react when he finds out about their (offscreen) night of passion. 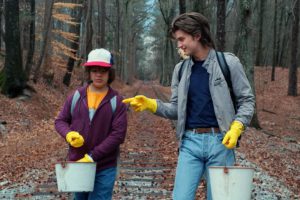 On the subject of Steve, this chapter of the story sees him continue his move into likeability that began at the end of last season. His pairing with Dustin makes for quite a few funny moments, but also presents a new side to the character. Steve becomes a sort of mentor to Dustin here, dispensing some advice about love that carries a small hint of sadness. On the show, Steve has frequently been depicted as a total douchebag, or a bit of a comic relief character, or even an action hero, but these scenes show him at his most emotionally vulnerable. The way Joe Keery delivers lines like “don’t fall in love; you’ll just get your heart broken” with understated melancholy indicates that he already knows he’s lost Nancy to Jonathan. The scene actually made me feel sorry for the guy, something which I definitely didn’t think I’d be able to say several episodes ago.

With the episode’s focus moving to the Jonathan/Nancy and Dustin/Steve pairings, there isn’t a lot for Joyce, Hopper, Mike or Bob to do this time round. While it’s understandable in some cases (after all Bob got his chance to shine in the last episode), having such high calibre actors like Winona Ryder and Sean Astin be given little to do for 45 minutes is quite disappointing. However, despite a limited plot influence, there’s a nice emotional sequence where Hopper attempts to contact an absent Eleven and apologise for blowing up on her back in Episode 4. It’s a lovely little scene, with Hopper (David Harbour, excellent as always) at his most exposed since the flashback to his daughter’s death from the season one finale.

We get some further development with the main storyline, as we see that Will’s connection to the shadow monster is growing, to the point he starts to lose memory of the people he’s talking to. It’s a very disturbing sequence, and Noah Schnapp (proving to be the season’s breakout star in the same way Millie Brown was last year) is brilliantly creepy, depicting the character’s loss of identity and slow possession by the monster. On a side note, it’s also refreshing to see that Dr. Owens is a good guy after all; having spent most of the season expecting Paul Reiser to play a variation of his role as Carter Burke from Aliens, I was pleasantly surprised to find out his intentions were ultimately somewhat benevolent, and that he wasn’t another amoral scumbag like Brenner.

I think it’s fair to say that Aliens was definitely a key influence on the final moments of this episode. The army of Demogorgon/dog hybrids that attacked the gang earlier (I can’t have been the only one who though Steve was going to buy the farm at that moment could I?) attacking the Hawkins lab soldiers in the tunnel draws immediate comparissons to the sequence where the marines are first attacked by the xenomorphs, and the shot of them climbing out of the pit is quite a nightmarish scene to end on.

‘The Spy’ is probably the strongest episode of this particular season so far; its attempts to slow down and home in on the characters makes for some very strong drama, and some rather funny sequences (Murray’s comments to Nancy and Jonathan on the morning after were a particular highlight). With one hell of a cliffhanger to end on, it’s clear the story is starting to speed towards its climax. And I for one can’t wait to see how this is going to end.