Bonkers as ever, W1A's final season ends on a high note.

W1A is the marmite of the comedy world. Its unique brand of humour isn’t everyone’s cup of tea; three series of awkward professional chatter at the BBC (and two before that with the Olympic Deliverance Committee) has juddered along in a fashion comparable to nails on a chalkboard, even for those that love it. But John Morton’s wry interpretation of corporate life has captured the hearts of those in on the joke – an eerily accurate if exaggerated depiction of what life at the top is like. 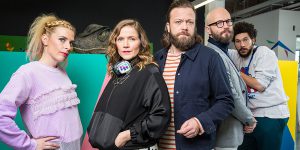 Saying that, commissioning a third outing for W1A seemed like a move the real life Ian Fletcher would have surely vetoed. The BBC is under a magnifying glass, viewed with suspicion by a government that holds it to random by saying things like “the BBC should be more patriotic” (excuse me while I roll my eyes for the next ten years). W1A’s third series toes a fine line in addressing these controversies whilst avoiding outwardly insulting the powers that be. “The fact is that this is about identifying what we do best and finding more ways of doing less of it better,” Head of Better Anna Rampton constantly quips. It’s undeniably baffling nonsense at first, but on second thought it’s exactly what the BBC is being instructed to do right now. So if there’s one positive to draw from the disputes caused by the White Paper, it’s that it’s given John Morton plenty of new material.

But while there’s new catastrophes to be dealt with, the format does seem a little tired. The corporate team meetings are overplayed, especially in the opening two episodes; what was once Morton’s USP has become grating five series in. The love triangle between Ian (Hugh Bonneville), Lucy (Nina Sosanya) and Anna (Sarah Parish) fails to hit its mark, even if Anna’s various mishaps are a series highlight. Her collision with one of Broadcasting House’s glass walls and consequential concussion must be up there with W1A‘s best moments so far. In comparison to Ian’s romantic strife, Will (Hugh Skinner) and Izzy’s (Ophelia Lovibond) delightfully strange bond is enchanting, despite the vulturous presence of Jack (Jonathan Bailey).

From a cross-dressing football pundit who’s just too boring for Match of the Day, to a double booking of Claudia Winkleman and Amanda Holden for a pun-ridden cycling show; the week-by-week chaos unleashed on these poor BBC employees are as hilariously believable as ever. But while there’s unlimited potential for f*ck up scenarios in W1A, there’s a definite feeling that the characters have stagnated. Jason Watkins’ insufferable yes-man, Monica Dolan’s tiresome straight-talker, David Wilkes’ creative vampire; three series in, the cast could definitely benefit from a shake-up. It’s something John Morton seems acutely aware of – he’s decided to bring W1A to a close with this series, though he admits it could return in some form or other eventually. What’s next for Ian Fletcher? There’s plenty of floundering corporations that could do with a grilling. Perhaps the NHS? Royal Mail? Or maybe Siobhan Sharpe for PM…?

W1A is available to watch in full on BBC iPlayer.