A far-cry from the brilliance of Series 1, despite glimmers of greatness from Suranne Jones and co.

It’s rare that a series so bonkers and improbably brilliant as Doctor Foster has an ending that lives up to its initial hype. Against all the odds, Series 1 of Mike Bartlett‘s ingenious melodrama provided perfect closure to a woeful tale of marital betrayal – so the decision to resurrect it for a second series was all the more surprising and concerning. But when it did finally return two years later, it seemed to glimmer with a similar tight knot of tension which made its first outing so successful. It seemed like the BBC had got away with it. Then the finale happened.

But let’s backtrack. Despite a victorious opener, Series 2 hadn’t been without its problems in the lead up to its conclusion. The back and forth between television’s most toxic parents Gemma (Suranne Jones) and Simon (Bertie Carvel) started off vicious but ended up repetition, chasing its own tail in the pursuit of constant sexually charged showdowns. The apparent descent of Gemma into Darth Vader levels of evil never really materialised despite the promise the opener made (the woman dissolved her wedding ring in acid, after all); Simon similarly fluctuated between all-out villain and sympathetic mess throughout the run. The show had lost some of the believability to its core characters, ones that were so brilliantly first imagined. 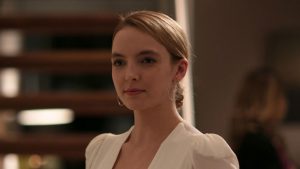 The apparent defeat of Gemma in Episode 3 finally signalled a welcome change to a stagnating formula. The focus shifted to Simon’s mistress turned wife, Kate – expertly played by the brilliant Jodie Comer – after earlier episodes seemed at a loss of what to do with her character. The opening half an hour of Episode 4 subtly balanced narrative focus between Kate and her parents, with Gemma’s vengeful shadow looming largely; an artful turn that proved Doctor Foster to be still amongst the cleverest dramas around. The episode came to a shocking end as it seemed we would be rewarded with that inevitable bloody showdown; only to be cheated of it in the opening moments of the finale.

It shouldn’t come as a surprise Gemma couldn’t bring herself to kill Simon. The ingenuity of Series 1’s ending was the fact that neither Foster ended up leaving in a coffin – a clever twist that kept the melodrama in check for what is one of the best hours of television in recent history. By Series 2, what was once clever is now predictable. The escalating vows of “the only way you’ll get rid of me is in a coffin” became exhausting and unenjoyable, leaving viewers wanting them to hurry up and die already. The Gemma Foster of this finale is a far cry from the triumphant bitch queen we fell in love with in 2015.

The final twist is a clever one, if poorly executed. What with the bizarre character progressions of Gemma and Simon, their anguished son Tom became the star of Doctor Foster‘s second series, with young Tom Taylor (now of the Dark Tower fame) showing acting beyond his years. It’s an apt ending that both Gemma and Simon lose their son – the thing they both forget they were fighting over – as punishment for the irredeemable actions. While in Series 1 Gemma managed to hold onto the role of ‘hero’ and was subsequently rewarded with Tom’s love, Series 2 makes it clear that neither Foster deserve their son’s love. However, considering the finale is so drawn out with awkward back and forth conversations between the three Fosters, the eventual conclusion feels shockingly rushed. One second, Gemma and Tom are driving off into the sunset; the next, Gemma and Simon might reunite; the next, Tom seems to have killed himself; and finally it’s revealed that he’s run away. An ending with more of a fizzle or an eye-roll than a bang.

While the finale confirms all the fears raised at bringing back such a hit series, there’s little point denying that having Suranne Jones and Bertie Carvel back on our screens is still a pleasure. With an impressive ensemble now including Sherlock‘s Sian Brooke, the acting and direction of Doctor Foster is just as well executed as with the first season. I just can’t help question whether a second series was really necessary in first place. Take note, BBC – some stories aren’t meant to have a second chapter.

Doctor Foster aired on BBC One. You can catch up now via BBC iPlayer.