Mario and the Rabbids are an odd combination, but this tactical RPG is shockingly fun to play.

Mario + Rabbids Kingdom Battle’s existence was leaked long before its eventual announcement at E3 2017. Rumoured even before the Nintendo Switch’s own reveal, this crossover between Mario and Ubisoft’s Rabbids was a source of much debate among fans. However, it now stands as a parable of not judging a book by its cover.

2006’s Rayman Raving Rabbids introduced the world to the absurd Rabbids. Similar to Despicable Me’s Minions, the Rabbids became well-known for causing chaos and screaming incomprehensible gibberish. Although Ubisoft’s creations were extremely marketable, spawning countless sequels and a TV show, many found their antics grating. It’s for this reason that Nintendo fans feared their crossover with the beloved Mario franchise. 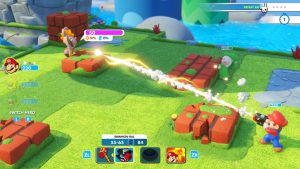 It has to be said that this fear was completely misplaced. Nintendo are extremely strict with their characters and would have never lent out their famous plumber without a firm belief that he was going to be well treated. It was Ubisoft’s unique premise that won Nintendo’s blessing: pit Mario and the Rabbids against one another in a deep tactical RPG. It sounds completely absurd, but it’s this ludicrous idea that makes Mario + Rabbids Kingdom Battle such a breath of fresh air.

After a time travel mishap, the Rabbids are thrown into the Mushroom Kingdom and begin causing chaos. While Mario would usually handle these catastrophes alone, several heroic Rabbids insist on helping him on his adventure to restore order. This is done by confronting rogue Rabbids in intense turn-based battles. It’s a style of game usually reserved for a more serious tone (Fire Emblem and X-COM spring to mind), so it’s interesting to see such a light-hearted take on the genre.

As Mario reunites with his usual cohorts, it becomes clear that each character has very specific uses in battle. For example, Luigi is able to perform long ranged attacks, but Rabbid Peach has healing abilities. As it’s only possible to have three team members in each level, it’s very important to consider who is of most use. However, this strategical element is slightly undermined by the fact that each team must feature Mario and at least one Rabbid character. 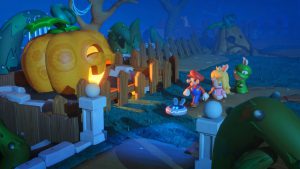 Graphically, Mario + Rabbids is great. While it’s far from a masterpiece, Ubisoft have blended the charming visuals of the Mushroom Kingdom with the bizarre world that the Rabbids inhabit. Musically, Grant Kirkhope’s score really lends some charm to both the overworld and the game’s battles. Kirkhope is one of gaming’s most well-regarded composers, writing some of the industry’s best whimsical themes. If you’re familiar with his work, I imagine that you still find yourself whistling some tunes.

There are some issues with the game’s restrictive camera and relatively short length, but it makes up for it with its charming wit, excellent battle mechanics and incredible music. If you’re looking for a deep RPG experience for the Nintendo Switch, Mario + Rabbids proves that these can come from the most unlikely places. I was among the fans worrying about Ubisoft’s take on the Mario series, but I’m extremely pleased to say that I couldn’t have been more wrong.

Mario + Rabbids: Kingdom Battle is now available for Nintendo Switch. Check out a trailer below.