Victoria is a royal treat.

Victoria, ITV’s latest Sunday night period drama based on the life of a young Queen Victoria, returned to screens this week. Undoubtedly commissioned to fill the Downton Abbey sized void left in the ITV schedule, Victoria is equal parts whimsy, melodrama and light humour, a balm for the looming Monday blues.

The first episode of the new series begins a few weeks after the season finale of the first, and shows the aftermath of the birth of Victoria and Albert’s first child. Depicting the struggle for power in the royal marriage, Victoria is torn between her submissive role as a wife in a patriarchal system and her role as Queen – the ruler of both a nation and her husband. That the team behind Victoria have chosen to depict challenges in the royal marriage is surprising in itself given the rose tinted and often superficial approach which the first series took. Despite this, Jenna Coleman displays her character’s struggle brilliantly, subtly building to one explosive confrontation scene with on-screen husband Tom Hughes (which is the peak point of the episode) instead of relying on melodrama.

Whilst the first season glazed over the darker historical precedent of the period, focusing on more attractive storylines in order to build up viewers, the producers of the second season – evidently confident in the show’s fan base – are not afraid to tackle darker issues to add depth to the series. Such issues are Queen Victoria’s emerging postnatal depression, alongside the horrific defeat of the British Army in Afghanistan. Both of these stories are handled sensitively and are interspersed with enough lighter material so as not to weigh down the entire episode. 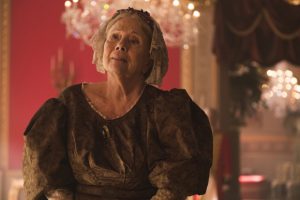 The effort to depict aspects of Victoria’s life often ignored by popular culture is to be applauded. The cast of Victoria is comprised of some fantastic younger actors, but as of Series One, the show was significantly lacking an elderly matriarch, diverging from the tried and tested formula of any successful period drama. Downton Abbey (ITV’s autumnal predecessor to Victoria) had Dame Maggie Smith – so Victoria has brought in the legend that is Dame Diana Rigg. Rigg plays Duchess Buccleuch, Mistress of the Robes to Queen Victoria. Initially employed by the Queen without an interview as a snub to her Prime Minister Robert Peel (Nigel Lindsay), Buccleuch proves to be a shock to her new employer upon arrival. Rigg brings both acerbic wit and superb comic timing to her role from her very eccentric entrance onwards, as anyone who has seen her in Game of Thrones would expect. Though her scenes in this episode are short, they pack a punch, and one feels she will soon whip both the Queen and Buckingham Palace into shape. Rigg’s performance will no doubt be a highlight of the second series if the first episode is anything to go by, though only time will tell whether or not she proves to be a thorn in the young Queen’s side!

Tom Hughes in his role as Prince Albert is slightly neglected in this episode, a result of the writers attempting to bring in both new plot lines and new characters simultaneously. One of the key themes of the episode is Albert having to relinquish control back to his wife after her confinement and birth of their child. Though Hughes is depicted as gently attempting to maintain some sort of royal authority, he is granted little screen time for full character development on this issue. It would be interesting to see how he would have portrayed Albert’s inner conflict as he attempted to be both a supportive and loving husband whilst also fulfilling his traditional masculine role.

It goes without saying that both the set design and costuming of this episode are lavish, something which we as the audience have come to expect. Though it is hard to believe that all the interior sets have been constructed from scratch in an aircraft hangar, Victoria is a treat for the eyes. Even if initially one is primarily attracted to the drama for the frocks, given the high design and production values of all involved, that is reason enough to tune in.

Overall, the first episode of the second season of Victoria is both good in its own right and promises much for the second series as a whole. Both Jenna Coleman and Dame Diana Rigg give the standout performances of the episode, though for opposite reasons. Coleman shoulders the dramatic heft of the episode, whilst Rigg provides the comic relief. The episode is not without fault and some aspects of the story such as Prince Albert are somewhat neglected, but the return to Victoria is a royal treat, must see television you’ve (Saxe-Coburg &) Gotha watch!

Victoria airs on Sunday at 9pm on ITV. Check out the Series 2 trailer below.