Death Squared can be incredibly frustrating, but it's never been more satisfying to hear that well-earned victory jingle.

Death Squared is frustrating. Some of 80+ puzzles will certainly lead to some controller throwing rage. However, this is what makes SMG Studio’s new puzzle game so gratifying to play. Set in a pristine scientific facility, the game asks players to guide simplistic robots through increasingly complex mazes. It can take 20 or 30 attempts to avoid some of the laboratory’s more vicious traps, but it’s so satisfying when you finally hear that well-earned victory jingle.

The goal is simple in Death Squared: get the robots to the checkpoint. However, SMG have designed over 80 ingenious levels to test your puzzle solving abilities. Although it’s easy in the early levels, it quickly becomes clear that the game is damn hard. Some of the puzzles are downright evil, SMG crafting such ingeniously difficult levels. It’s no wonder why they included a constant death-counter in the HUD, I died a lot. 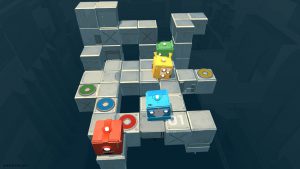 Although it’s certainly possible to control each robot simultaneously, it’s far more fun to recruit some friends to play in local multiplayer. It seems SMG are aware of this fact as all the game’s marketing refers to it as a “multiplayer puzzle game”. While it can be frustrating that a single player’s mistake means everyone restarting the whole level, it makes constant communication essential. Although I could criticise it for not featuring online multiplayer, it’s the kind of game that is best enjoyed sat around a TV with friends. The Nintendo Switch version of Death Squared certainly has a further leg-up here, the detachable Joy-Con controllers perfect for a local multiplayer game like this.

Death Squared’s remarkably simple controls mean that anyone can jump in and play. Robots are controlled using only the Joy-Con’s analog stick. While this severely limits the player’s abilities, it is this limitation that forced SMG to design such ingenious levels. Unable to jump over the game’s various obstacles, Death Squared forces players to think more creatively. Although some of the more tricky stages will have you tearing your hair out, it’s never an issue with controls. 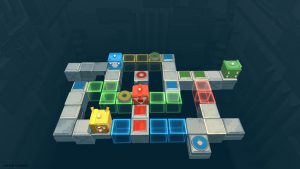 Similarly, SMG Studios might not win any awards for their game’s remarkably simple graphics, but they serve their purpose perfectly within the game. All of Death Squared’s robots are similar looking cubes, but they are clearly marked apart by their contrasting colour schemes. It’s basically impossible to confuse your droid for another player’s. It’s the same with the game’s many obstacles, it’s easy to tell what’s friend and what’s foe. The HUD is also beautifully simple, removing any unnecessary clutter. This is essential for some of the game’s more malicious levels. It’s certainly not game-changing, but it’s perfect for this intricate puzzle game.

The voices of a wise-cracking technician and a rogue AI provide constant commentary throughout each level, SMG taking obvious inspiration from Valve’s Portal series. While their repetitive banter does occasionally become grating when you’re forced to repeat levels, the game owes much of its charm to these two characters. It’s an option to turn off Iris and David’s commentary, but Death Squared is a far more enjoyable experience with the two wittering as you play.

Death Squared is one of the year’s best local multiplayer games. Although it’s stressful and frustrating, I have never felt more satisfied completing a troublesome level. If you’re looking for something challenging to play with a group of friends, it’s a game you ought to consider. I wouldn’t advise playing it drunk though.

Fancy trying Death Squared? It’s available now on PS4, Xbox One, PC and Nintendo Switch. Check out a trailer below.