Read more
You are at:Home»Culture»Review: Orange is the New Black (Season 5)
By Carly-May Kavanagh on July 3, 2017 Culture, Television
60%
60
Mixed

Season 4 of Orange is the New Black ended with the death of Poussey (Samira Wiley) at the hands of a guard and the beginnings of a riot. The shot span around Dayanara (Dascha Polanca) as she was surrounded by inmates, holding a gun and about to shoot CO Humphrey (Michael Torpey). Season 5 starts right where the previous season ended, beginning the three-day riot that is spread over all 13 episodes. While some scenes can feel a bit stretched out, the overarching riot is powered by the death of Poussey and the inmates’ need for justice. 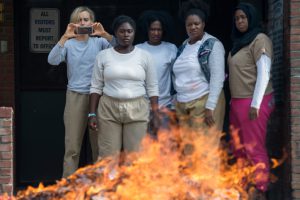 Thankfully, Piper (Taylor Schilling) and Alex (Laura Prepon) don’t really feature much in the season. There is the slight issue of the guard that Alex killed, but they mostly manage to keep out of the drama. Taystee (Selenis Leyva) plays a major role in this season, being at the forefront of negotiations between Fig (Alysia Reiner) and Caputo (Nick Sandow), who’s desperate to see justice for Poussey and isn’t afraid to make demands in exchange for the girls’ peaceful surrender. This storyline is one of the most impactful in the season, as Taystee has to balance what’s right and what people will want. The private company who owns the prison is trying to bribe the inmates to surrender with junk food, but Taystee and her family (plus Piper for a couple of episodes, weirdly) know that they want justice and nothing else will cut it. Taystee absolutely holds this season together and it would not be half as good without her. Another incredibly strong character is Red (Kate Mulgrew). While the scenes with her and Piscatella (Brad William Henke) occasionally feel like a horror film spoof, this storyline is far too dark and haunting to ruin with comedy. At times, I genuinely feared for Red’s life. It is definitely a stellar storyline from the season.

OITNB wouldn’t be OITNB without some comic relief, and this season definitely needed it. The show excels at its juxtaposition of tragedy with humour. Maritza (Diane Guerrero) and Flaca (Jackie Cruz) finding a smartphone and starting a YouTube make-up channel definitely goes some way to balancing out the darker storylines of the season. While it’s easy to get caught up in the fight for justice within the prison, nobody will realistically escape the consequences of it. Inmates will given extra time, Caputo and guards will probably lose their jobs and Max will likely gain some new residents. There’s a gun somewhere in the prison thanks to Humphrey, a SWAT team outside ready to burst in at any point, and more than one person in the prison has killed someone at some point. Some very dark humour is needed to balance this out, as well as some more human moments – which the season also does well. Soso (Kimiko Glenn) is grieving the death of her girlfriend Poussey and sets up a library in a hallway to honour her. This is a tender moment of the season and something that helps bring the characters together.

It isn’t all great though. The Judy King (Blair Brown) storyline gets even more ridiculous when she is taken to the roof and tied up by the white nationalists, a scene strangely resembling Christ’s Passion. Then there’s Frieda’s (Dale Soules) bunker in a disused swimming pool –complete with an inexplicable computer – that the SWAT teams are unable to find. It all just feels a bit disjointed and goes a bit too far. I cannot suspend my disbelief quite that much – sorry Jenji Kohan. In addition to this, the flashbacks aren’t as effective as in previous seasons. Alison’s (Amanda Stephen) and Piscatella’s were quite remarkable, but Frieda’s only acted to justify the bunker and Red’s simply reminded us about her previous life in the Soviet Union.

This season shows us a very interesting microcosm of human civilisations during the riot. We have King used and bartered as a slave, a mini-economy emerging and the separation of those who want to take part in the riot and those who don’t. There’s also the guards being imprisoned by the women, all of whom are kept as hostages, tortured and denied clothing and water. These reversals in power are handled exceedingly well. However, I do wish the riot actually ended in this season, and I hope Season 6 isn’t little more than the aftermath of the riot.

Orange is the New Black Season 5 is available to watch now via Netflix.