The Iron Throne is the least comfortable and most sought after chair in the Seven Kingdoms’ bizarre game of musical chairs. It’s has seen more bums than Game of Thrones has shown boobs the last six years; but whose prize behind will warm it in the end? 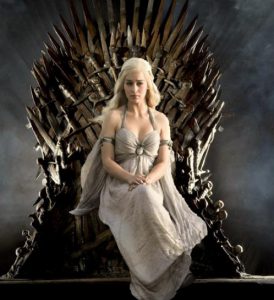 It’s gotta be Dany, hasn’t it? Meek Khaleesi turned warrior Queen, this silver haired badass has been on the biggest journey of anyone in Westeros – and now she’s finally coming home. Armed with three dragons who are surely the Seven Kingdoms’ only hope against the advancing White Walkers (more on them later), Daenerys has the strongest hand of all the contenders for the Iron Throne.

Saying that, she’s got some pretty big Achilles’ Heels. Though she grows more ruthless by the second, she’s pretty attached to servant Missandei, and she’ll surely be reunited with Jorah Mormont before the series ends. She’s the daughter of the Mad King (his actions in burning many people) and she’s shown glimpses of a darker side herself. 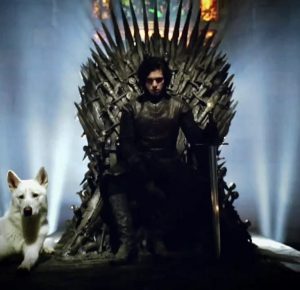 The Iron Throne is serious business; for some reason, everyone but this gloomy guy wants to sit on it. And because it’s Game of Thrones, the who knows nothing is exactly the one who will probably get it!

Jon Snow may not be the Mother of Dragons, but he knows some things about war. He’s the charming underdog, and didn’t have to do much to get some of the series’ most significant characters on his side. Besides, if we consider the theories about his parents (R+L=J); Melisandre’s prophecy; as well as the fact that he was killed and brought back to life – the only way he could get out of the Night’s Watch and into the big game – it looks like there are bigger things in store for him than just being King of the North. 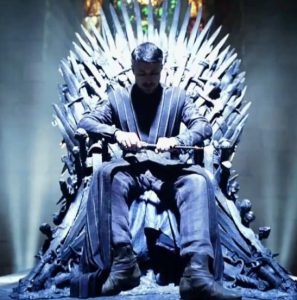 If Game of Thrones has told us anything, it’s to expect the unexpected (see: Ned Stark, the Red Wedding, Tyrion’s trial by combat). Surely a less obvious character will win the ultimate prize – and I’d put money on Petyr Baelish, aka Littlefinger. Why? The upcoming war against the White Walkers will obviously claim some lives, and it would be kind of beautiful to see Cersei and Daenerys take each other out in a fiery blaze of glory as the last living Targaryen assaults King’s Landing. Knowing their opinions of the men who sat in that chair, Jon, Tyrion and Jaime would likely refuse the responsibility of being King, even if they live long enough to get the chance. As for Littlefinger – the man who started it all – he will live on and never get the justice he truly deserves. Littlefinger is a master schemer, and to see him sit on the throne he so craves would be utterly haunting. 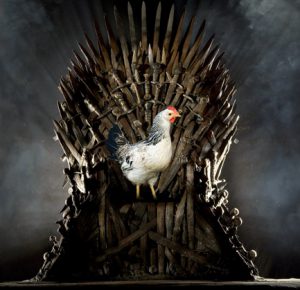 What makes ‘the Artist formerly known as The Hound’ (a.k.a. Sandor Clegane) such a great character is his no nonsense, no bullshit ethos. He’s a man whose had a hard hand in life, scarred by his own brother and hired to do the Lannisters’ dirty work. It’s not been all too cheery for Sandor, but then again, this is Westeros – is it really cheery for anyone?

He’s shown loyalty, bravery, toughness and a surprising amount of heart, with his relationship with Arya in Season 4 a person highlight for me and many viewers. And in Season 6, after his surprise resurrection, we saw a more humane side to him (before he butchered a bunch of murderers, that is), showing that there really is a gentler soul somewhere in that hardened shell. Sandor would exact punishment on those who need it, do the tough work himself and possibly make Arya Stark Hand to the King – why wouldn’t you want him on the Iron Throne? 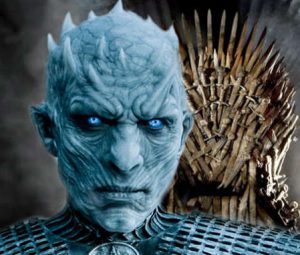 “If you think that this story has a happy ending, you haven’t been paying attention.”

Whenever I think about the ending of HBO’s Game of Thrones, this quote from the irrepressible Ramsey Bolton always comes to mind. In a story which includes the stabbing in the stomach of expectant mothers, the burning alive of a church full of people and the repeated marital rape of a female character, surely an ending which leaves any of the living character on the Iron Throne undermines the narrative of death and misery.

It seems clear that the only ones who can legitimately win the Iron Throne at the end of the series are the White Walkers. Remorseless, strikingly dangerous, and literally full of cold menace, at this point in the show it seems a rather uneven match-up – the humans of the show who are constantly fighting one another and three dragons against a united, army of ice monster? It just doesn’t seem winnable, and I’m not sure it would be satisfying and in keeping with the rest of the show if a human ended up winning the Iron Throne.

The ideal final shot of the show? A close up shot of the King White Walker as he takes his place on the Iron Throne, which then pans out to show Daenerys’ dragons destroyed by the cold. 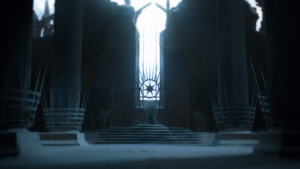 Although Daenerys and Jon have proven themselves worthy, both are about to engage war on two fronts: Cersei Lannister in King’s Landing and The White Walkers in The North. Both foes are formidable with powerful weapons and armies at their disposal. Whilst I don’t think they’re unbeatable, Daenerys’ vision from way back in Season 2 suggests The Red Keep will fall to fire and ice. Make of this what you will, but with Cersei unlikely to give up her position as Queen and the White Walkers more than likely to invade, whoever gets that throne won’t keep it for very long.