Eleven weeks goes fast, doesn’t it? It doesn’t feel like two minutes ago the excitement was building for Series 10 of Doctor Who, and now its coming to an end. In honour of the two-part finale, which starts tonight (Saturday 24th June) on BBC One, your incoming and outgoing Culture Editors have once again teamed up (remember our fun list of Christmas specials?) to rank revived Who‘s biggest finales. Without further ado, let’s sort the “fantastic!” from the timey wimey trash…

After River Song (Alex Kingston) shatters a fixed point in time, the Eleventh Doctor (Matt Smith) and his companions are flung into a world where history is collapsing in on itself. 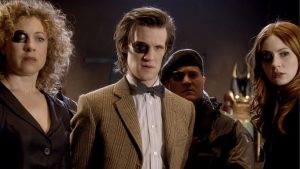 Steven Moffat is often praised for writing some Doctor Who‘s most creative episodes, but ‘The Wedding of River Song’ is a far cry from the likes of ‘The Empty Child’ or ‘Blink’. While it features no more plot contrivances than some of the other finales, it commits the far worse crime of being both unoriginal and dull. Moffat shamelessly rehashes ideas from the previous year’s finale, the Doctor being thrust into a similarly collapsing alternate universe in ‘The Big Bang’. While that episode admittedly underused this interesting concept, it’s unforgivable that he would so blatantly recycle the premise only a year later. However, even looking past this, ‘The Wedding of River Song’ is still plagued with other problems. It feels like it is trying to cram a traditional two part finale into a single episode, the entire story’s pacing completely off. It opens with the Doctor travelling the universe for answers, but the sequence’s breakneck pace means we only actually remember the gratuitous Dalek cameo. After 30 minutes of similarly half-baked scenes, the climax is compressed into an unsatisfying exchange of explanatory dialogue atop an inexplicable pyramid. It’s difficult to think of how ‘The Wedding of River Song’ could be any worse. If it was a real wedding, I certainly wouldn’t be hanging around for the reception.

The Eleventh Doctor finally arrives on Trenzalore, where the mystery of the Impossible Girl – Clara (Jenna Coleman) – is finally solved… 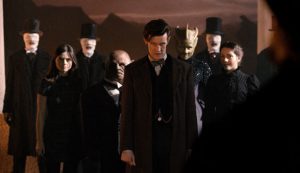 Again, the episode is let down by a lack of two parts, meaning the high stakes required to make a dynamic finale have to build up during 45 minutes alone. Not that there really are any high stakes – ‘The Name of the Doctor’ plods along, with the Doctor not actually appearing until around a third of the way through. Vastra, Jenny and Strax (Neve McIntosh, Catrin Stewart and Dan Starkey) contribute little to the plot, and seem only present to make people excited for finale week. It’s a similar case for River Song (Alex Kingston), whose presence in the story makes absolutely no sense except from Moffat’s desperate need to have his beloved Doctor’s wife in every finale of Matt Smith’s era. Series 7’s ‘Impossible Girl’ arc is an infuriating non-sensical arc, especially as it is forgotten about immediately after this episode, and Clara’s sacrifice is quickly undone with absolutely no real explanation. And the less said about the Great Intelligence the better. Overall: a plodding, tonally confused nightmare of a finale, but at least John Hurt makes a stellar cameo at the end.

After Danny Pink’s (Samuel Anderson) sudden death, Clara demands that the Twelfth Doctor (Peter Capaldi) find a way to bring him back. In their impossible mission, they finally encounter the mysterious Missy (Michelle Gomez)… 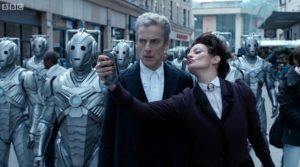 Series 8 is arguably the most troubled series of Doctor Who. It’s a set of largely dodgy standalone adventures verging from boring to ridiculous, and Peter Capaldi is frustratingly inconsistent as the anguished Twelfth Doctor, yet to hit his stride. The two-part finale – the first two-parter since 2011 – is far from the worst in the series, but it’s not perfect either. True, there are some great moments; Missy murdering Osgood (Ingrid Oliver) is deliciously wicked, and Clara’s desperate attempt to force the Doctor to save Danny Pink by destroying TARDIS keys puts your heart in your mouth. However, the overall premise is deeply flawed, even to the level of offensiveness. “Don’t cremate me”?! Really, Moffat?! It’s sick and twisted tale of the dead rising, made even worse by the fact it’s completely implausible that the entire history of Earth’s dead has been inside Missy’s ‘Heaven’ waiting to be turned into Cybermen. Saying that, if Michelle Gomez’s breathtaking performance here is anything to go by, we’re in for a treat with the upcoming finale (the first to feature her since 2014).

With a dark premonition predicting the destruction of the Tardis, the Eleventh Doctor discovers a mystery lurking underneath Stonehenge. 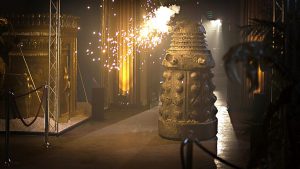 As Steven Moffat’s first attempt at a finale, the climatic end to Series 5 doesn’t fall prey to the showrunner’s tendency to over-complicate. ‘The Pandorica Opens’ is beautifully slow-moving, the episode carefully building tension throughout its 50 minute runtime. This is all in service of one of Doctor Who‘s most dramatic cliffhangers, with Amy lying dead and the Doctor literally facing the collapse of reality. However, ‘The Big Bang’ is a disappointingly mediocre follow-up. The majority of the episode is spent running away from a single weakened Dalek, presumably crammed in so it could appear in the trailers. With all this essential running about to do, the actual resolution is left feeling incredibly rushed. In typical Moffat fashion, the climax might as well have been the Doctor hitting a big reset button. While moments like the Doctor’s Stonehenge speech mean this finale will go down in Doctor Who history, the actual plot is completely undermined by its lacklustre second half.

So that’s all but one of Steven Moffat’s finales coming in the bottom half of our list… How will last year’s ‘Heaven Sent’ / ‘Hell Bent’ fair in the top five? And which finale will be crowned the best? Check out the second half next Saturday…