Read more
You are at:Home»Culture»Review: Annie at the London Piccadilly Theatre
By Bruno Russell on June 16, 2017 Culture, Theatre
100%
100
Masterful

With a multi-talented cast and excellent vocal performances, Annie is the perfect theatre production!

Not seen in the West End since 1998, Annie has returned to the London Piccadilly Theatre for an 8-month stint between June and January 2018. With a stellar cast, including Miranda Hart as Miss Hannigan, the show was a complete triumph. I have never awarded five-stars to a theatre production before, but Annie‘s multi-talented cast, excellent choreography and ingenious set design certainly deserve it. This is one musical you do not want to miss! 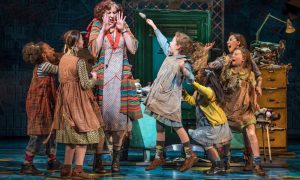 We must start with Miranda Hart’s Miss Hannigan. I had my worries about Hart taking on the role. While I love her as the foolish comedy star, this part requires a wickedness that was portrayed perfectly by Craig Revel Horwood in last year’s touring production. Hart, however, surprised. While less conventionally evil, she created a character you simultaneously love and hate by exaggerating Miss Hannigan’s more quirky side and emphasising the evil mistress’ drunkenness. While her vocal performance was slightly more bellow-y than her co-stars, it was polished and clearly appreciated by the audience. Her performance of ‘Easy Street’ was a masterclass in theatre performance. I would watch it on repeat if possible. Alex Bourne also did a fantastic job as Oliver Warbucks, the billionaire who tries to adopt Annie. He gave the character a new sense of generosity which allowed the audience to better empathise with him.

However, the star of the show was Ruby Stokes’ Annie (she is one of the three girls who play the role on alternative nights). Her vocal performance was astonishing as she belted out the classic ‘Tomorrow’. Stokes didn’t drop a line the whole show, was able to make the character wholly believable and completed her choreography perfectly, bringing the character to life. For all this to be done by a 11-year old defies expectation and shows many professional actors up. Stokes is, without doubt, a star of the future. In fact, all the youth performers deserve praise. The group of orphans all brought an individual personality to their role and a great vibrancy to their vocal numbers. To put it plainly: I cannot fault them. Some reviewers have criticised the show by calling it ‘dated’. I disagree. While some of the politics will seem alien, the show easily manages to transport you to the streets of 1930s New York. Some may even see parallels to our own time – it’s not like we’ve never had a financial crisis – but those who don’t draw these parallels won’t get less out of the performance. We understand the gist of the political context and no more is needed. Annie is an orphan and orphans are not treated well. Its not dated at all. 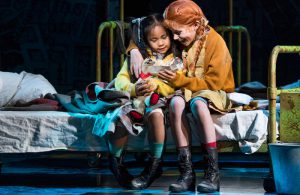 Away for the actors themselves, the set and the costume design were very polished. Though the set was noticeably Matilda-esque, the jigsaw puzzle border was novel. Most impressive was how the set design allowed for a variety of different settings to be represented. It was clear that much thought went into the stage direction as you were seamlessly transported from the orphan house to the luxurious mansion. Again – and I seem to overusing this phraseology – this should be a masterclass for many other productions. It also helped with the dating issue. The streets of New York were clearly contrasted with the Warbucks mansion through the clever use of dark colours to represent the poor and bright to represent the rich. This allowed Annie to subtly present the contrast on stage without becoming overly political. The costume design was also extremely polished and suited each character well. In many cases, the outfits were cleverly used to communicate each character’s personality. For example, Miss Hannigan’s disgusting multi-coloured cardigan emphasised her careless nature. On a side note, the band cannot be faulted.

For a review, this had very little criticism. But I can assure you that is not because I am easily impressed. Rather, it is because this show was so spectacular. While I could naturally nit-pick extremely small problems, this seems overly pedantic. Hart and Stokes both did an amazing jobs, the musical numbers were well performed and the set design was extremely clever. I cried, I laughed and I sang along. As musicals go, this is hard to beat.

Please note that Miranda Hart appears as Miss Hannigan until September 17th 2017, while the production closes on January 6th, 2018. You can buy tickets for future performances here.