Read more
You are at:Home»Culture»The Allure of Twin Peaks
By Jordan Mac Phee-Torres on May 21, 2017 Culture, Television

In an age saturated with TV shows boasting more impact and tenacity than many Hollywood blockbusters (see Stranger Things, Breaking Bad), it’s easy to forget how the phenomenon of the television serial metamorphosed into a colossal smorgasbord of dramatic depictions. Much of this owes itself to a television drama which revelled in its ability to enthral, confuse and charm its viewers – Twin Peaks.

In 1990, Twin Peaks opened with a near two hour pilot episode that asked the endearing question of “Who Killed Laura Palmer?”. It would go on to become an integral part of pop culture, setting a precedent for unorthodoxy and risk in entertainment, and showing that with an ensemble of quirky dialogue, an evocative score and captivating performances, TV could be just as big as cinema.

It’s now twenty-seven years since David Lynch and Mark Frost’s acclaimed series built a steady crescendo that ultimately climaxed at the conclusion of Season 1, but then crumbled with Season 2. Despite never quite regaining its integrity after its collapse, Twin Peaks is back against the odds for a third season, with old faces and some new ones too – but if you haven’t seen the show prior, why should you care about a return to the sleepy town of Twin Peaks?

Simply put, there hasn’t been anything quite like Twin Peaks since it first aired. Its enduring appeal and allure is only possible because it’s a hybrid of everything we have come to adore and cherish about drama; it’s funny, creepy, sexy, philosophical, quirky and finally, it’s bold – something today’s TV shows can often lack. It doesn’t play on monotonous crudity (Orange Is The New Black) or accumulate endearing tropes and elements to create some type of dishevelled simulacrum (Stranger Things). Twin Peaks’ ensemble of misfits and miscreants superimposed itself against an entertainment landscape that had just washed its hands of Anthony Yerkovich’s Miami Vice, which though incorporated multiple story arcs, didn’t quite do so with the same effectiveness which made Twin Peaks’ supporting characters just as intriguing and integral to the show.

Most of the TV shows you now hold beloved may stem from the path that Lynch and Frost paved by disguising an art-house film as a murder mystery, glossed in the fuzzy and homespun 90s aesthetic that evident in Twin Peaks‘ analogue ratio and abundance of knitted cardigans. Take Lost – a show known for crossing genre boundaries and letting one mystery unravel over the course of an entire show – it follows a pattern Twin Peaks made some twenty years earlier. Even a show like The Sopranos makes heavy use of dream sequences to probe the psyche of its main character Tony, much like the way Agent Cooper was aided by supernatural forces in his endeavour to find Laura Palmer’s murderer. The influences are evident in TV shows that have grown to be household names, and so without the boldness that Twin Peaks pioneered as it fused hilarity with horror, our TV landscape would have looked very different.

For a TV show that deals with murder, prostitution, alienation, sexuality, horror and betrayal, Twin Peaks told its story with a rich subtlety that never allowed itself to be wholly taken seriously, in an attempt to paint itself as a serious show, for serious viewers. Instead, it facetiously drew upon whimsical musical score and comedy to provide a relief from the dark themes, but did so in away that showed, at the heart of the dark occurrences, the people of Twin Peaks were still their own idiosyncratic selves who at times were swept up in their own Quixotic misgivings despite Laura Palmer’s murder. 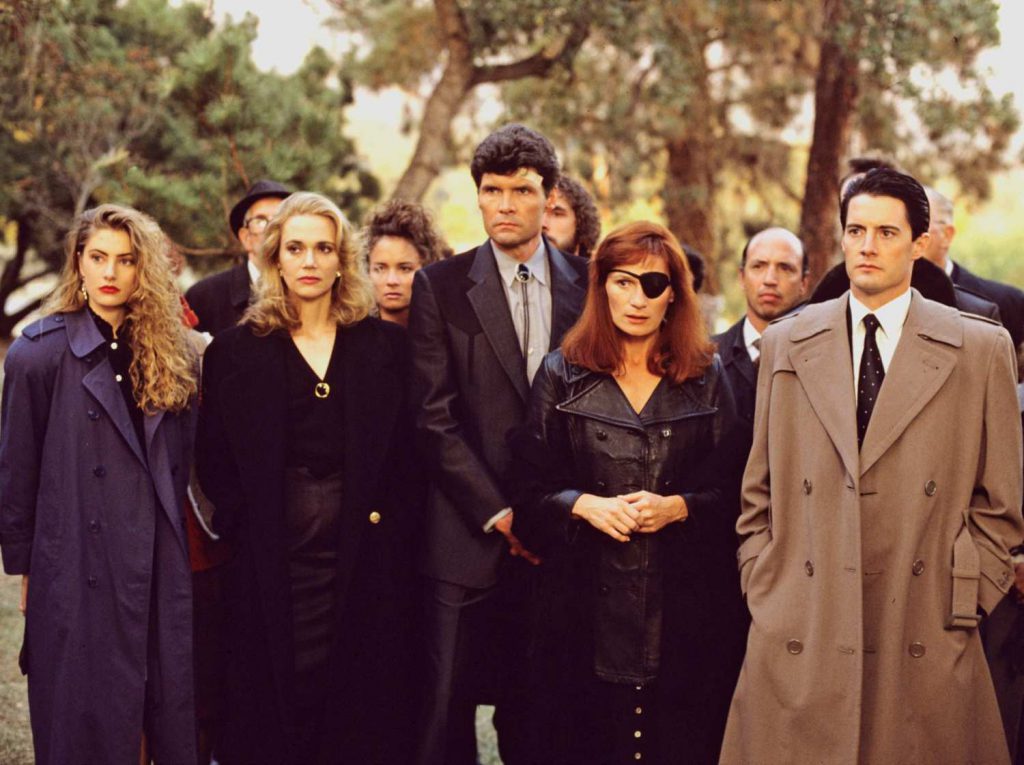 As Twin Peaks returns to our TV’s after more than twenty years, there are many questions still to be answered since Season 2’s cadence split opinion among viewers. Is Laura Palmer relevant at all? Is Audrey still alive? Why is Cooper back in Twin Peaks? And most importantly – does the Double R Diner still serve such great coffee and cherry pie?

Twin Peaks begins on Sky Atlantic on 22nd May.