Read more
You are at:Home»Culture»Review: The Woman In Black at Nuffield Theatre
By Bruno Russell on May 18, 2017 Culture, Theatre
80%
80
Accomplished

Excellent standards of acting and a cleverly constructed set made The Woman In Black a stunning performance, even if there was less horror than I hoped.

Susan Hill’s critically acclaimed The Woman In Black is one of the most successful and long-running theatre shows in the country, having been played at Fortune Theatre since 1989. Stephen Mallatratt’s touring adaption – starring David Acton and Matthew Spencer as the two actors – thus has big boots to fill. On the whole, they were boots well filled as the acting standards were very high, ensuring that the character’s emotions came across well. Sadly though, the element of horror did not come across as effectively as hoped. I left not having screamed out once (and I’ll admit I’m quite easy to scare). It was a well-accomplished performance but not the traditional Woman In Black.

There are many positives. The setting was very well constructed within the touring production. Set in the Nuffield one hundred years ago, they transformed the stage from a theatre practice room to the haunted mansion and graveyard with great ease. The use of lighting and audio was impressive and created the eerie atmosphere that is so central to this play. The use of props was clever and creative, and I was specifically enthralled by the room maintained as the 6-year old’s bedroom. It was creative and pitched perfectly. 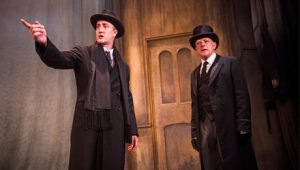 The other main positive, without a doubt, was the outstanding standards of performance. A two-man play, especially one as emotionally draining as this, puts a lot of pressure and burden on the two actors. Acton and Spencer, however, rose to the challenge. Acton took on the role of Arthur Kipps (and hence, the ‘other man’ in all scenes during the stories performance) and started off with a great timidness that made the audience sympathise with the character. The audience then grew with him throughout the story. The star, though, was Spencer who – as ‘the actor’ – took on the role of Kipps’ within the story’s performance. He portrayed the emotional strain of the character with great effect and sensitivity, especially during the scenes where he originally had the mysterious woman introduced to him. His heart-wrenching portrayal of the dog being killed was one of the most impressive pieces of performance I have seen in a long while. I really hope Spencer’s performance is noted and celebrated by award organisations.

Why has this not got five stars then? Sadly, for one reason. Some of the “scream” moments failed to really land, a couple even perhaps slightly mistimed. The ‘woman in black’ herself wasn’t particularly eerie either; the actress who played her (though not credited) made little effect in her ‘jump out’ moment, which was sadly a failure. To plug the irony, the only thing wrong with The Woman in Black was the Woman in Black!

Overall though, it was great night out, with a stunning acting standard and a well constructed atmosphere with effective staging. You’ll be on the edge of your seat, and you’ll care about the charecters. Sadly, though, you might not scream.

The Woman in Black continues at the Nuffield Theatre until this Saturday (20th May).