Peter Kay's Car Share is still on fine form, showcasing the most agonising of 'will-they-won't-they's... But why only four episodes Peter? 😢

Two years, we waited for the TV gem Peter Kay’s Car Share to return. TWO YEARS. And what to do we get? Four episodes. A mere two hours in return for our two years of patience. And with that, I end all complaint I have with Series 2 of the BAFTA-winning comedy; and I suppose anguish over how short your show is probably counts as a compliment.

Car Share‘s second series may only be two hours, but it’s two hours of absolute TV gold. Each episode puts an unique twist on the normal format of ‘car sharing’, with a move away from the show just being about John (Peter Kay) and Kayleigh (Sian Gibson) travelling back and forth to work. Episode 1 sees Kayleigh separated from John and taking public transport to work; Episode 2 has the pair going to and from a work’s do; Episode 3 sees them bunking off work; and Episode 4… well, I’ll let you wait and see.

The success of the show hinges on the electric chemistry between its two leads, Peter Kay and Sian Gibson. The duo have worked together on-and-off since Kay’s career sky-rocketed, though Gibson had largely retired from acting when she was approached to star in Car Share. Good thing she came back, too, as no matter how funny grumpy supermarket manager John is, dippy and sweet-natured Kayleigh is needed to melt his heart, and together they deliver belly-aching moments of laughter. Their ‘will-they-won’t-they’ romance hums underneath the surface of every scene they share, ever more prominent in Series 2 after Kayleigh’s subtle declaration of her feelings via a Now 48 CD. Despite this, there are only a handful of moments where things seem particularly romantic between them; that is, until the finale, where events take a surprising turn. John and Kayleigh feel like kids in a school playground, enough to reawaken memories of the excitement and nerves involved with a new relationship. 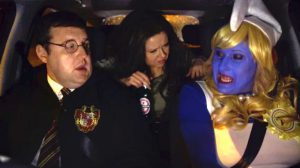 Though they don’t need any help in carrying the show, some great guest stars join them in the car. Most notably is Conleth Hill, best known as Varys in Game of Thrones. “Where?!” I hear you cry. Yes, that is Hill behind a thick layer of blue facepaint, stealing the show in Episode 2 as John and Kayleigh’s colleague Elsie, who comes to the work do as Smurf. Raucously drunk Elsie falls asleep while directing John to her house, pisses out of the car door, and outs the obvious connection between him and Kayleigh to their faces. It’s actually refreshing to hear “Will you two just get together already?” said out loud in the show.

Another bizarre choice of guest star is Guy Garvey, a.k.a. the lead singer of Elbow, who recurs as Steve, Kayleigh’s sister’s fella. He’s charming enough as he tinkers day and night over the vintage bike outside Kayleigh’s new home, though he’s notably absent when Kayleigh ends up locked inside before work. Then there’s the most outrageous guest of them all – a stray monkey, who stows away on the roof of John’s car after a visit to the safari park.

All this is to the sounds of the genius ‘Forever FM’, a clear rip-off of the likes of Heart and Absolute Radio. This series we’re treated to the sounds of S Club’s ‘Never Had A Dream Come True’, Salt-N-Pepa’s ‘Push It’, and Shakira’s ‘Hips Don’t Lie’. The cheesy radio station makes it all the more relatable to any driver on the road, and thus increases Car Share‘s mass appeal. The ludicrous adverts on the ‘Big Big Drive Home’ include a doctor abandoning a patient on the operating table in favour of shopping at the ‘Shed Store’, although they aren’t that far from the real ones you hear on Heart and its sister stations.

Car Share is proof that there is no need to overcomplicate good comedy. This extremely simplistic premise should have quickly become boring, but four more episodes is far from enough to satisfy our Car Share appetite. Given the somewhat cliffhanger it ends on, fans are more desperate to see John and Kayleigh again than ever – let’s just pray a third season doesn’t take quite as long as their journey to work, yeah?

Car Share airs on BBC One, Tuesdays at 9pm. The entire series is available to binge-watch via the BBC iPlayer. Catch the review of Episode 1 here.