Fancy a holiday? How about a trip to a quiet seaside town in Dorset, where everyone knows everyone, and you can look out over several high-profile murder sites from the top of beautiful white cliffs? Broadchurch is the place for you! 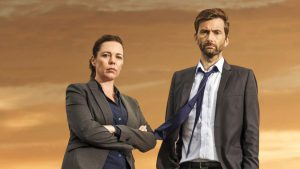 Our return to Broadchurch is once again guided by detective Alec Hardy and Ellie Miller, aka plethora of talent David Tennant and Olivia Colman. I’m sure I’m not alone when I say I could watch these legends act all day. On a sombre note (or perhaps a positive one for the trouble-stricken residents of the eponymous seaside town), creator Chris Chibnall has confirmed this will be our last visit to Broadchurch. He’ll be busy from next year onwards running Doctor Who, after the departure of Steven Moffat (hurrah!). Hardy and Miller’s final case follows a devastating sexual assault, occurring after a community-wide party. Trish, the rape victim, is played by the stunning Julie Hesmondhalgh, best known for her sixteen years in Coronation Street. Broadchurch returns to ITV on Monday 27th February, at 9pm; read our preview of the upcoming series here. 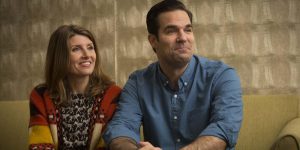 Another big return comes in the form of Channel 4 comedy Catastrophe, starring Rob Delaney and Sharon Horgan. This sharp, keenly observed show follows the relationship of a fictionalised Rob and Sharon, as the lust of their initial meeting is struck by – you guessed it – catastrophe when Sharon falls unexpectedly pregnant. Series 2 followed their married, family life, while the upcoming Series 3 has promised to take yet another direction – as Sharon Horgan so eloquently put it; “Series 3 is well, we’re in it now, so whatever happens, we’re gonna stay together.” And they say romance is dead. Catastrophe is also special, as it was the last thing filmed by the late Carrie Fisher, who has a recurring role as Rob’s quirky mother on the show. Catch the show’s return on Tuesday 28th February, 10pm on Channel 4.

ITV are taking a gamble into the unknown this week, starting up their own Nightly Show, an on-the-beat satirical news show airing every night of the week. Of course, it’s a great time to be a satirist; there’s enough content coming from just the White House daily to keep the comedy world happy. The Nightly Show looks to pinch some from the successful formulas of the US’ Saturday Night Live, or even their Late Late Shows, providing some famous faces with a good stage to vent their frustrations. They are also changing presenters on a weekly basis, with proceedings kicking off with David Walliams. ITV must be hopeful, as they’ve shifted the actual News at 10 to half-past. The Nightly Show kicks off 10pm, Monday 27th February on ITV, and continues in the slot until Friday. 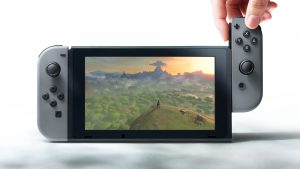 We’re gifted with a new console release this week, as Nintendo resist the overpowering influences of Sony and Microsoft by releasing their endeavour into the unknown, Nintendo Switch. Following the contrasting success of the Wii and the failure of the Wii U, Nintendo are surely trying to get the best of both worlds by combining handheld and home consoles into one device. The Wii U can be used through your television when placed in a dock, but turns portable through its LCD touchscreen interface. Find out more about the console in our first-look examination of the Switch; it’s available from Friday 3rd March.

Games available for play on the Switch will initially be sparse, but there will be a lot of fans content with its biggest release so far; the brand new Legend of Zelda. The nineteenth instalment of the series, Breath of the Wild, returns to the mythical world of Hyrule, where our hero Link awakens from a 100-year slumber to rescue the story’s eponymous princess once more. The game has been plagued with long delays, originally announced for the Wii U for a 2015 release, but you can finally get your hands on it this Friday.

And if you’re mega keen, you can buy an official book companion to the game. The Complete Official Guide to Breath of the Wild is (you guessed it) available on Friday, and offers annotated maps and screenshots to show you the way through every quest. However, it’s carefully designed to avoid unnecessary story spoilers!

Nuffield Theatre welcomes another great children’s play this week. Old Mother Hubbard is an NST Children’s Production, taking place at the campus’ studio theatre this week. “Join Old Mother Hubbard as she clatters about her kitchen hanging out the washing and making breakfast with her dancing dog Oscar at her side.” The show is at Nuffield for a very special performance on Saturday 4th March, with tickets still available via their website.