Arriving on a planet near you on the 21st March, BioWare’s Mass Effect: Andromeda promises to build on the previous three critically acclaimed Mass Effect games, travelling beyond the borders of our universe and into a completely new one. The newest entry in the Mass Effect series follows a team of pathfinders into the uncharted Andromeda system, where they are trying to find a new homeworld for the 20,000 people depending on them. Part RPG, part shooter, the previous Mass Effect games pushed the boundaries of customisation and storytelling to bring a very personal gaming experience, and Andromeda seems set to bring this to a new level. Andromeda will be the first Mass Effect game set in an open world environment, leaving you free to explore like never before. 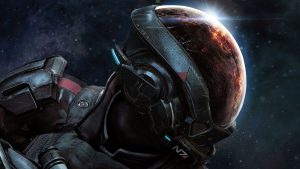 Set hundreds of years after Mass Effect 3, you’ll take control of either Sara or Scott Ryder. You will be able to level up without the restrictive class system of the previous games until you’re able to specialise in a style that suits you. Unlike Mass Effect 2 and 3, Andromeda has brought back exploration with an all-terrain vehicle, allowing you to discover resources, deploy mining drones and defeat bosses on the planets you discover. It may also be more difficult to work out morals in Andromeda – whereas the previous games allowed you to choose between Paragon and Renegade dialogue options, Andromeda offers a far more nuanced dialogue wheel where decisions may not seem so black and white. Andromeda is also unique in that the Ryder siblings are independent of each other, the one that you don’t select will feature in the game alongside you. Companions in Andromeda also seem to be the usual mix of aliens and humans with personalities ranging from battle-hardened soldiers to lone wolves with dark pasts. 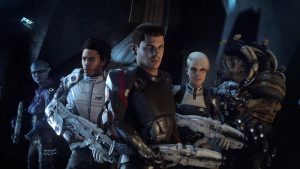 Visually, Andromeda looks as though it will be as cinematic as ever. The box art looks a lot like a sci-fi film and judging by the visuals in BioWare’s last release, Dragon Age: Inquisition, it looks like an unexplored galaxy would be the perfect place to push the boundaries of Bioware’s graphics engine. The plot is being kept tightly under wraps, but we know that the main antagonist comes in the form of new alien race the Kett, a previously-unseen species with a lot of scope for crazy new tech. The ending of Mass Effect 3 was hugely controversial among fans of the previous games, but you’ll be pleased to know that BioWare refuse to release any spoilers for Andromeda‘s ending – producer Michael Gamble said, “We want to leave the ending, and what we’re doing with it, as a surprise. This is a different type of story, so it will be something different than the trilogy.” Andromeda certainly seems to be making a return to the sense of discovery found in the original Mass Effect game, with many developers who worked on Andromeda coming into the team as fans of the first game.

Andromeda has already won the Golden Joystick Award and Global Game Award for ‘Most Anticipated Game’, and it’s not hard to work out why. Visually stunning and conceptually fascinating, Andromeda looks like it will be a revolutionary new addition to BioWare’s library, and a hugely entertaining game for old and new fans of the Mass Effect franchise.

Watch the latest trailer for Mass Effect: Andromeda below.