We’re wrapping up the year here in the Culture section, and what better way to reminisce than with our writers’ verdicts on the best games of the year! Though 2016 has been somewhat of an annus horribilis in many areas, there’s still been some strong games released, so take a read and see if you agree with our picks. 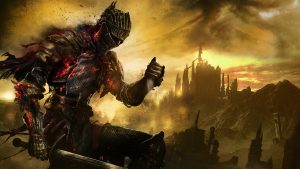 The third (and supposedly final) entry in the acclaimed Dark Souls franchise received much critical recognition from reviewers and fans alike, with good reason.

Combining the weapons and armour that made the previous two iterations so popular with the online PvP community, and adding a swifter movement style comparable to 2015’s Bloodborne, Dark Souls 3 had a mission statement from the get-go. Appeasing the many adoring followers that it has accumulated, the game is a love letter. Featuring not only fan-favourite gear and armaments from previous titles but actually evoking the spirit of those games with enemy encounters, breath-taking environments and intense boss battles that draw upon all the very best the series has to offer. With a heart-wrenching OST that perfectly captures the melancholy and stoicism of these devoted warriors, and an intense mid-fight switch-up, the fight is sure to stick out in the memory.

But Dark Souls 3 is far more than just a regurgitation of former series glories. The new storyline, locales and enemy designs are – in the wake of the wake of Lovecraft-inspired horror masterpiece that was Bloodborne – at a series high, with gruesome creativity dripping from every particle. The jump to next-generation consoles brings the Souls series into a the high-definition limelight, allowing you to observe its grotesque monsters in greater detail than you ever wanted to.

2016 has seen many the release of many great titles, but few have managed to not only live up to, but surpass their own legacy in the way that From Software’s trilogy-closing masterpiece has done. 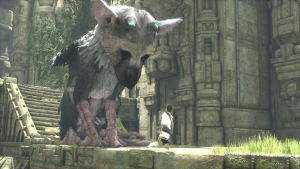 No other release in 2016 has impacted me as strongly as The Last Guardian. Despite being originally destined for the PS3, The Last Guardian does not fall short visually, and Team Ico’s dogged dedication to aesthetics and immersing the player in their environment shows the extent that I spent admiring the world around me – and I would recommend that everyone does the same!

The storyline is a pleasantly different experience to its predecessors and an entirely novel one in the gaming world but possesses the same strengths and pull which made Ico and Shadow of the Colossus so beloved. Although the game is not as tightly put together when it comes to the camera manoeuvring and sometimes clumsy controls, upon finishing the game I found it exceedingly difficult not to start a second play through immediately.

The most enchanting part of The Last Guardian is the relationship which forms between the player and their companion Trico. Therein lies the game’s strengths; after finishing the game I found myself questioning, “had I done as much as I could?”. Where other games end at the fulfilment of having completed the main quest line and the accomplishment of victory, The Last Guardian absorbs you into its massive insular environment, leaving you with a feeling of limitless possible progression. The nonlinear nature of the world serves as one of the game’s greatest triumphs rather than faults, and suffice to say, I am well into my second play through, and more in love with the game than anything else I have played this year. 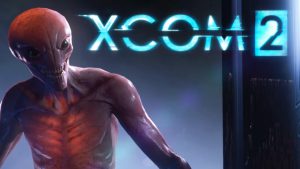 I was a little apprehensive about February 2016’s XCOM 2 because I’d enjoyed the first game so much – it had tactical battles, great gameplay and high-stakes missions that I thought would be difficult to top with a sequel. I was really pleasantly surprised with the new game, however, because setting it 20 years after the first game when the aliens have beaten humanity gives the game a desperate edge that ramps up the adrenaline and pressure for you to succeed.

The character customisation is far more expansive (I may have created all of my housemates as a squad, and they haven’t survived as well as I’d hoped), and the AI has been programmed with an element of randomness that challenges even the most seasoned XCOM player. It’s much more replayable than the previous game, and far more emotionally engaging – there are hard decisions to be made that have left me sacrificing squad members for the greater good and struggling to stay one step ahead of the game. Virtually all of the bugs are cosmetic, but taking that into account, the game quality is still superb – I’ve put hundreds of hours into the game, and thanks to the revamped game engine, I can see myself putting in a whole lot more.

The Witcher 3: Blood and Wine 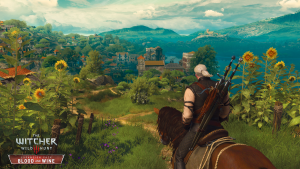 The Witcher 3: Wild Hunt (released in 2015) is possibly the greatest game of all time, and is certainly one of the best reviewed. In October of the same year they released the amazing expansion Hearts of Stone, which pitted Geralt against a dastardly foe Gaunter O’Dimm or the Man of Mirrors. This expansion did not expand the original map of The Witcher 3 in any great detail and was set during the events of the main game. 2016 saw the release of the final piece of Witcher content – Blood and Wine. Set after the events of the main story line, Geralt takes up a contract to slay a beast terrorising the Duchy of Toussaint: a sleepy, sunny kingdom to the south, whose inhabitants spend most of their time drinking. The whole new area is beautiful, taking heavy inspiration from medieval Spain and Mediterranean Europe, and also huge. It is a true fairytale land, with Knights competing in tourneys and slaying beasts to win the hands of women. But underneath this exterior is a dark story about something the original game didn’t explore in detail: Vampires.

Throughout the narrative, we delve into the vampire world with Geralt’s old friend Regis, who is definitely one of the best characters in the series. The Witcher always depicted human drama extremely well and the tale of two estranged sisters, which is central to the plot, delivers another brilliant story. Outside of the main narrative there are plenty of engaging and hilarious side quests to complete, with the highlight being the Knights’ tourney Geralt enters. When all’s said and done, the DLC wraps up The Witcher 3 in a perfect way, and if this is the last time we see Geralt, Blood and Wine is a fitting send-off. 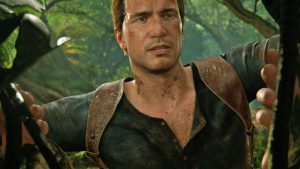 A Thief’s End is a rare example of a game series which gets better with age. The clunky graphics have been smoothed out, and look absolutely gorgeous. While the gameplay isn’t too different from previous instalments in the series, the AI has massively improved, meaning players have to be sensible and tactical when sneaking through, or be prepared for a fierce gunfight against multiple foes. Uncharted 4 glides between gameplay and cutscenes seamlessly, with an excellent narrative, various dialogue trees, and genuinely engaging and developed characters. Although the story is still linear, the maps have become much larger and players can freely explore to discover secret dialogue and other hidden collectibles to find. No wonder it became the best selling PS4 exclusive game of all time.

Nathan Drake is easily one of the best modern gaming protagonists, but Sam, Sully and Elena all make a great supporting cast. While Rafe Adler is at times predictable and forgettable, Nadine Ross is a ruthless power-hungry femme-fatale who in my view is the best antagonist in the quadrilogy. Uncharted 4 is, without a doubt, the best game of the year. The narrative is superb and the storyline unique, blending a variety of humour, emotion and tension to a brilliant climax. The multiplayer is great fun, and props for Naughty Dog for not bowing to the cash-cow pressure of paid-DLC. Bonus points for a Crash Bandicoot cameo too! 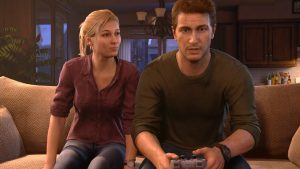 Although I am not a gamer, I have played a few titles in the last couple years, and nothing hooked me the way that Uncharted 4 did. I went into it not knowing much about the story or the previous games, but it was still exciting from the get-go. While there are a number of tricky moments throughout the game, it’s still a fun challenge. There is a perfect balance of physical action and puzzles, with great cutscenes sprinkled throughout. The incredible thing about Uncharted 4 is that a lot of the time it feels more like you are watching a film than playing a game. You grow attached to the characters, and you can’t wait to find out what happens next. It really did become difficult to put the controller down and call it a day.

As well as the main narrative, if explored carefully, each setting has a number of detailed props which tell an intricate story which links to the wider context. Uncharted 4 manages to evoke so many different feelings and emotions from the player, ranging from excitement, fear, and exhilaration. There’s even a few moments that will tug at your heartstrings. I can easily see how the franchise will work as a feature film, and I can’t wait to see how the production process unfolds after the phenomenal success of the game.

And so wraps up another year of gaming, with general consensus pointing Uncharted 4 to the best game of 2016! Make sure to check back tomorrow for The Edge‘s Top 10 TV Shows of the year…