Wednesday saw Theatre Group’s brand new crop of freshers making their debut in Ian Woolridge’s adaption of Animal Farm; an adaptation of the George Orwell allegory of the 1917 Russian revolution and the establishment of communism that followed. Key parallels in the play include the pigs Napoleon and Snowball mirroring Stalin and Trotsky, and the old Major as the father of communism Karl Marx. The remainder of the farm animals are representative of the Proletariat, with Farmer Jones as the affluent bourgeoisie. As a massive fan of Orwell, my expectations for the evening were set well and truly high, and as I found my seat in the Annex, I was pleasantly surprised to find the place packed with students and Theatre Group members alike. 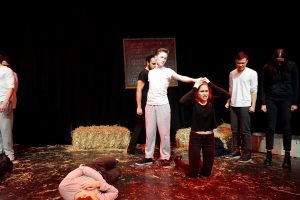 As the play began, I was initially disappointed by the lack of costumes to set apart the various types of animals on stage. While this may have been an effort to highlight the allegorical nature of the play, the missing costumes made it tricky to remember which animals were which. While several characters made an effort to portray their animal consistently, Ian Bessant’s pigeon imitation being particularly amusing and lighthearted, most dropped this after the opening. Other than this small gripe, I was blown away by the quality of the production. The sound effects and lighting present in the battle scenes only served to emphasise rather than overshadow the impressive physical theatre.

The majority of the cast mastered their characters. In particular, Jack Henderson (Squealor), Natalia May (Snowball) and Mark Strong (Napoleon) made a terrifying trio as the ruling class of pigs who terrify and manipulate the farm animals they preside over. Also notable was Jordan Gardner’s portrayal of the old overworked farmhorse Boxer. While several key moments fell a little flat—the murder of Boxer was not nearly as heartbreaking as it could have been, nor was the cruelty of Farmer Jones emphasised enough in the beginning—the cast went from strong to outstanding throughout the course of the play. My favourite moments were the terrifying executing of Snowball’s ‘spies’, which hung the audience in suspense, and the ridiculous transformation of the pigs into drunken toffs in the final scene. For me, this production of Animal Farm not only cemented TG’s place as the leading producer of quality theatre in the University, but introduced onto the scene a group of outstanding newcomers who look set to energise the society in the years to come.