Fast-paced, funny and leaves you wanting more, in spite of a rocky start; this show doesn't disappoint.

Well, just six episodes later, and the first series of E4’s Crazyhead is over. Nobody can say that creator and writer Howard Overman hasn’t packed the brief series full of storylines and tropes – possibly to detrimental effect, in fact. The dynamic duo of Raquel (Susan Wokoma) and Amy (Cara Theobald) saved the world, in just six episodes “with a little help from Beyonce and an inflatable zombie.” Crazyhead is a supernatural, female-focused buddy show that feels eccentric – one series later and the sight of someone reading an exorcism from a smartphone still never fails to leave me vaguely unsettled. It most definitely keeps you on your toes and remains unpredictable, right up to the finale.

Whilst the premise of the show has proved interesting, and it can’t be denied that it has been done well, one of my only complaints is how brief the series was. I found it hard to get attached and learn to like characters when they are on screen for so little time; I can’t get emotional and miss someone if they were only in one or two episodes before being dramatically killed off. 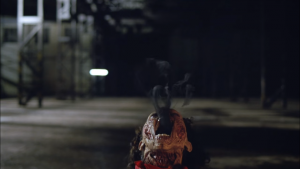 The only other part of the show that is vaguely problematic is the tendency towards tropes – there’s the lovesick, friend-zoned one, the heroine who suddenly (and conveniently) develops powers with no warning, the villain with no real motive other than being evil and wanting to watch the world suffer, and the ‘special’ chosen one destined to open the gates of hell. Of course, some characters aren’t quite so easy to classify, but this might be a bit of a deal breaker for some. It would be far more bearable if the series were longer so that these moments were more spread out and grounded in backstory, but it does add to the humour, though.

Thankfully, all of the other issues that made themselves known in the first episode, such as the awkward on-screen chemistry between Theobald’s Amy and Wokoma’s Raquel, have since settled into a more tolerable, if slightly unconventional, balance. The pacing issues that affected it have also resolved themselves as the show progressed and began to pick up the pace, as it quickly sped towards the final stand-off.

Another theme present right from the first episode, and one of the best things about this series, has been the stellar soundtrack that only got better throughout the series. I would watch the series if only to listen to the likes of Gin Wigmore’s ‘Kill of the Night’, DOROTHY’s ‘Wicked Ones’ and a dozen more like them, as they intersperse the contemporary with a good number of more famous anthems like Frankie Goes to Hollywood’s ‘Relax’, to a spectacular effect.

So, whilst the start was less than brilliant, Crazyhead has definitely ended on a high note. However, it might not be over so easily for heroines, Raquel and Amy — writer/creator, Overman, has since revealed that he has “pretty strong plans” for developing a second series. Yet, you’ve got to wonder where exactly they can go with the series when the girls have already saved the world… Nonetheless, Crazyhead is an interesting watch and the sooner you learn to just roll with their spectacular brand of crazy the more you will enjoy this bizarre show.

Crazyhead aired Wednesdays at 9pm on E4; all episodes are available on All4. It will also be released on Netflix following UK transmission.