Read more
You are at:Home»Culture»Review: The Shawshank Redemption at Mayflower Theatre
By Naomi Graves on October 18, 2016 Culture, Theatre
60%
60
Ambitious

An ambitious attempt to capture the terror of Shawshank Prison for the 22nd anniversary of Frank Darabont's cult film. 

Taking on Stephen King’s cult classic, The Shawshank Redemption, is certainly not a task for the faint-hearted. When I entered the Mayflower Theatre, I expected to be chilled to the core by the terror and corruption of Shawshank prison. The opening image did not disappoint; the juxtaposition of Frank Sinatra’s hopeful and upbeat ‘Beyond the Sea’, with the stark, grey set of a prison cell, was poignant. Three naked inmates stood in the spotlight, whilst peered upon by dark, animalistic figures above; setting my expectations high for a harsh, and visually shocking style of performance.

Unfortunately, this darkness did not continue, as the production soon adopted a light-hearted, almost comical tone, with the audience finding laughs in almost every scene. The darkness of the humour was occasionally lost when the tense atmosphere on stage dropped, giving a playground or school-like feel. Despite this, Adam Henderson Scott’s comic portrayal of Rico was thoroughly enjoyable, and his presentation of religion from an inmate’s perspective was a lovely touch, especially when juxtaposed with the Warden’s twisted and corrupt version of faith. 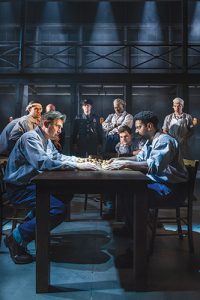 Luckily, the brutality and animalism of prison life was salvaged in Sean Croke’s portrayal of Rooster, whose disjointed, slithery gait was enough to give you chills along with his grating husky voice. This intensity was truly achieved during the gang rape scene, and I wish that the discomfort I felt during the blackout alongside Andy’s (Paul Nicholls) guttural screams could have been followed through and replicated in other moments in the play. Red’s (Ben Onwukwe) normalisation of this gang rape was haunting; a stand-out part of his many monologues throughout the play.

A true asset to the performance, Nicholas Banks’ portrayal of Tommy rapidly heightened the level of energy with his utterly believable and youthful characterisation. Another excellent casting choice was made with Andrew Boyer as Brooksie, whose depiction of the older, system-beaten prisoner was both beautiful and devastating. I do not believe that either of these characters were effectively paid tribute to with their unbelievable deaths; Tommy’s, in particular. The fast pace of the dialogue seemed to lose meaning behind Tommy’s murder, which was a pivotal moment in showing the Warden’s inhumanity. Meaning behind the text was also lost at times of sadness, which may have been due to the fairly poor script adaptation, which left little to the imagination despite the actor’s efforts.

On reflection, I can understand some of the pitfalls and struggles of recreating such a classic tale. The director and actors told King’s story with determination and ambition. With just an injection of more energy, tension and believability, the gritty tale of devastation and hope in Shawshank prison could have come to life.

The Shawshank Redemption is on at Mayflower Theatre in Southampton from the 17th-22nd October 2016. Click here to find out more.