Rebels perfectly captures the essence of the Star Wars universe - the force is strong with this one.

Fans often commend Marvel for building their massive TV and movie universe, but Star Wars is a franchise that has equally expanded beyond the traditional numbered movies. Its extended universe now encompasses multiple books, comics, video games and TV shows. The animated series Star Wars Rebels is yet another entry point to the galaxy far far away.

Now entering its third series, Star Wars Rebels has been a huge hit with fans of the franchise. However, its scheduling on Disney XD have prevented it from becoming a mainstream hit. This is particularly frustrating as Rebels does deal with all the same themes as the immensely popular film series. The cartoony designs of all the characters may suggest Rebels is nothing more than a cheap cash in for kids, but this opening episode is full of the same blaster firing, lightsaber swinging action that fans have come to expect. However, what is most shocking is the deep character development that seems to already be in place from prior seasons. As it became clear that the series’ main character Ezra (Taylor Gray) has slowly been corrupted by the dark side, I realised this was no normal children’s cartoon.

As well as capturing some of Star Wars’ more mature themes, Rebels also seems masterful at recreating some of the franchise’s most iconic imagery. While largely disconnected from the events and characters of the original films, Rebels is able to ground itself in the Star Wars galaxy through clever uses of the franchise’s aesthetics. The opening scene of the episode takes place during a raid on an imperial prison block. Before the first line of dialogue, the building’s design instantly transports fans back to Princess Leia’s cell on the original Death Star. While this connection is never drawn by the characters, anyone who’s seen the original Star Wars will instantly recognise the look and know the context of the scene. 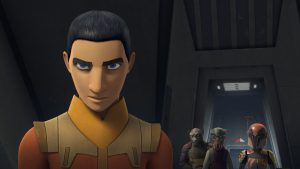 However, despite these clever nods, it is the series’ visuals which lets Rebels down. As CGI animation becomes the norm, I am beginning to grieve the loss of traditional hand drawn animation. While CGI can look incredible when done right, the characters in Rebels look like they are made of plastic. Their shiny, oddly proportioned faces never quite look right, appearing largely expressionless and inhuman. The series’ main character Ezra has hair that looks like it came straight off a Lego man. However, on the bright side, the inevitable action figures can be incredibly accurate to the show. The episode’s voice acting was good, if slightly unremarkable. The main cast all served their roles well, but no one actor stood out as exceptional. However, the cameo appearance from ex-Time Lord Tom Baker was a nice surprise, his booming voice fitting for a centuries old force sensitive mystic.

As a piece of the wider Star Wars universe, Rebels does an amazing job bridging the gap between the juxtaposing prequel trilogy and the original films. The subtle hints to events of both trilogies make it clear where in the timeline the series takes place. Various side characters from both eras appear in this opening episode, getting more limelight than their original appearances awarded them. There’s something so satisfying about cleanly filling in the gap between the films, like placing the finals piece into your incredibly elaborate Star Wars themed puzzle.

While I would recommend Rebels to any Star Wars fans, Series 3 is not the place to start. Having only seen bits and pieces of previous episodes, I felt slightly out of the loop joining at the beginning of this episode, especially as, unlike the majority of children’s television, Rebels seems to be very continuity focused. However, after seeing what the series has to offer, I imagine I’ll be checking out Rebels’ earlier episodes before too long.