Diving straight into it's third season with no signs of faltering, BoJack Horseman continues to be one of the best Netflix Originals to date; combining darkly satirical humour with brilliantly realised drama.

When BoJack Horseman first debuted on Netflix, I stupidly and immediately dismissed it. With the medium of TV in no shortage of animated comedies for an older audience, it arrived in an already highly saturated market. It was only until both season one and two had been released, and lurking on the platform for some time, before I finally gave it a stab. Thank goodness I did.

We return to our returning core of characters – the titular BoJack (Will Arnett) who is anticipating the release of his passion project ‘Secretariat’ and his impending award nominations; Todd (Aaron Paul) who continues in his growing trend of leading Mr Peanutbutter into hilariously stupid business ideas (the joke this time around is that it becomes a storming success); BoJack’s agent Princess Carolyn, who is struggling to keep her new agency afloat; and Diane who, is struggling with her marriage to Mr Peanutbutter. 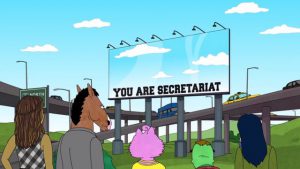 It’s fair to say that although there’s been quite a wait (considering most animated TV shows, like Family Guy, don’t go on year long hiatus’), we are chucked straight back into the mix. Nothing’s changed with our characters and that’s something that we have to give credit to the writers for. Due to the shows irreverent nature, it could lend itself to having instances where the characters act in completely illogical and outlandish ways, not consistent with their personalities, and pass it off as part of the comedy. That’s not the case here. Unlike most animated comedy series, there is a continuous narrative that holds this all together and that only works because the characters are consistent in their actions. Because of this, the emotional pay-offs (and we do get plenty of those this time around) are much more resonant and powerful as they have been worked towards right from the pilot.

It might seem odd that I’m mentioning emotional pay-offs in what many would describe as a comedy series. However those who are actually familiar with it know that it is not the type of show that can be tied down to one genre, and that’s the beauty of it. Throughout previous seasons, and this one as well, the writers have never shied away from tackling heavy subject areas with honesty and integrity, as well as with a razor-sharp satirical edge. That’s what separates BoJack Horseman from the plethora of other comedy shows.

The first six episodes are an absolute joy. As well as continuing to provide us with more of the same material that made the first two seasons so hilarious – such as Mr Peanutbutter’s inherent stupidity to Todd’s completely irreverent hijinks – the creators also flex their muscles in terms of the visual storytelling. This season features an episode, which is more or less completely underwater and includes next to no dialogue. What could’ve been essentially a filler episode morphs into one of the best episodes they’ve produced yet and really highlights how they’ve grown and improved in their field. 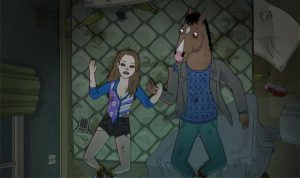 This season also introduces some new characters too. Princess Carolyn’s ridiculously stoic and robotic new assistant, Judah, and BoJack’s hard-as-nails campaign manager, Ana Spanikopita, are especially great treats and add another layer to the already wonderful cast of characters. Comedy is often touted as the hardest genre to nail. Unlike other genres, there’s no formula to comedy. Nobody can predict what will stick and what will misfire. Coming into the third season, the writers deserve a big pat on the back for maintaining their knack for generating unexpected laughs and knowing when to withhold the comedy. In fact, arguably the biggest laugh comes right towards the end of the series, but they (without us knowing) tease the punch line throughout the whole season.

Of course, the script wouldn’t have it’s value even half realised, had it not been for the pitch perfect voice casting. Will Arnett’s gravelly, sedated and measured delivery for BoJack works wonders in the more serious moments as he manages to humanise BoJack, who otherwise would be utterly detestable. But he also has spot on comedic timing; something not lost on those who also watched him in Arrested Development. Aaron Paul continues his strong work in the show, something he hasn’t quite translated to his foray into feature-lengths films. Todd remains endearingly loveable, which is why when his relationship with BoJack strains, we really feel for him and Paul absolutely sells that.

Amy Sedaris’ Princess Carolyn remains the pedantic, frenetic work-centred character she’s always been, but with the added issue of realising she never has time to herself. We get much more development of her character’s private life and Sedaris proves she’s equally up for it. As for Alison Brie’s Diane and Paul F. Tompkins’ Mr Peanutbutter, they are both as consistent as the rest of their counterparts. Just like the previous two seasons, there are plenty of guest actors who lend their voices, including Jeffrey Wright, Angela Basset, J.K Simmons, Alan Arkin and the hilariously recurring guest-star Margo Martindale, who plays herself of course. It’s no surprise that the show continues to nab such great stars, and they themselves all produce some wonderful work.

I wouldn’t have guessed that a show about an anthropomorphic horse could manage to make me laugh, make me feel as though someone’s cutting onions in the room and leave me asking important questions all in the same scene, but long may it continue.

BoJack Horseman is available to stream on Netflix now.