The lovechild of Spielberg and King; Stranger Things brings forth a long-awaited reawakening of classic 1980s sci-fi and horror nostalgia, wrapped within an intriguing original narrative.

It doesn’t take long for Stranger Things to set its tone. Within the beginning of the first episode, its familiarity within the 1980s film canon is unmistakable. It seemingly alludes to the opening sequence of the 1985 blockbuster Back to the Future; panning the surroundings, focusing on similar focal points such as a television news broadcast and setting the score; all of which set the narrative with that distinctive 1980s vibe.

Created by Matt and Ross Duffer (credited as the Duffer Brothers), Stranger Things is the show that fans of 80s sci-fi, adventure and horror films have been waiting for, and most notably, it also a show that isn’t a remake, reboot, adaption or sequel. Despite it’s many influences, this is a totally original series. The show’s creators are relatively new to the scene, best known for their 2015 thriller Hidden and the 2015 adaptation of Blake Crouch’s novel, Wayward Pines.

Remnants of Wayward Pines are unmistakably present and woven into the atmosphere of Stranger Things. Instead of recreating the aesthetics and narrative of Wayward Pines, the Duffer Brother present their unique homage to 1980s horror and science fiction in a way that hasn’t been seen on television – or film – before.

Stranger Things is laden with homages and nods to a variety of references, not all specifically from the 80s themselves. The show undeniably pays respects to 80s films such as Stand By Me, Poltergeist, E.T.: The Extra-Terrestrial, Close Encounters of the Third Kind, The Evil Dead and The Goonies, but also takes the small town, strange goings-on from the likes of The X-Files and Twin Peaks in the 90s. 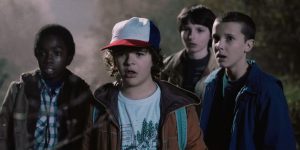 Set in Indiana in 1983, a 12-year-old boy named Will Byers (Noah Schnapp) vanishes without a trace. The next day, Will’s group of friends set out to find Will and discover a girl instead – a girl who appears in the same place in which Will disappeared, harbouring strange telekinetic abilities and the capability to find him. In true X-Files fashion, it becomes apparent that the closer the people of the small Indiana town get to the truth, the closer they come to facing the wrath of not only a secretive government agency, but something else, undeniably supernatural.

It’s not only through aesthetics that the Duffer Brothers are able to create the familiar atmosphere; the fractured families of the children within Stranger Things are a familiar layer within narratives of the time, such as those in several Spielberg and John Hughes films – and they are narratives that have been absent since the late 1990s. Both the Byers and the Wheelers deal with this on differing levels.

The Byers fractures stem from the absence of Will and his older brother Jonathan’s (Charlie Heaton) father, seemingly affecting their mother Joyce (Winona Ryder) more than themselves. Whereas the Wheeler’s problems revolve around Mike Wheeler’s (Finn Wolfhard) sister Nancy (Natalia Dyer) and their mother Karen (Cara Buono), with the two never seeming to be able to see eye to eye until events unfold throughout the episodes which eventually bring them closer together.

For the first television effort on their own, the Duffer Brothers took a gamble. The heavy use of homage and nostalgia could have severely hindered Stranger Things, but they manage to balance it so effortlessly that it makes the show rather than impedes it.

Stranger Things also benefits from an undisputedly talented cast. From famous faces to new child actors of incredible capability, they each evoke a distinctive layer within the narrative. Even with a legend such as Winona Ryder, it’s the kids performances that ultimately steal the show. Finn Wolfhard (Mike), Millie Bobby Brown (Eleven), Gaten Matarazzo (Dustin) and Caleb McLaughlin (Lucas) anchor the show with a blend of innocence and wisdom beyond their years.

Stranger Things: Season One is available to watch in full on Netflix now.