Read more
You are at:Home»Culture»Review: Aladdin at the Prince Edward Theatre
By Sophie Trenear on July 19, 2016 Culture, Theatre
80%
80
Stunning

An exceptional adaptation of the beloved 1992 Disney film, led first and foremost by Trevor Dion Nicholas's Genie and secondly by the awe-inspiring set, 'Aladdin' proves to be 'one jump ahead' of the rest of Disney's current projects.

Since May 2016, the Prince Edward Theatre in London has been graced with the magic and mastery of Aladdin, one of Disney’s most iconic and well-loved musicals now adapted for the stage. With a multitude of songs both old and new, Aladdin stays close to its roots whilst being unafraid of venturing into new territory, offering clever substitutes for characters unable to be brought to life, like Abu and Raja – who were, nonetheless, sorely missed.

The play tells the tale of a kind hearted ‘street rat’, Aladdin (“can I call you Al? Or maybe just Din? How about… lassie!”), the ‘diamond in the ruff’ who gets his hands on the Lamp, the home of the Genie (“PHENOMENAL COSMIC POWERS; itty bitty living space”). He grants him three wishes and in doing so changes the course of Al’s life. It’s really about time Aladdin got brought to the stage here in the UK. What results is a fun-filled, beautifully choreographed and expertly scripted musical, which really seems to know its demographic is a muddled mixture of 7-year-old kids, their parents, and a lot of 20-something year old Disney fanatics ecstatic to see their childhood relived. And it’s wonderful to see that the show fulfils everyone’s expectations and everyone’s, ahem, wishes. Coming out the other side of Aladdin, not one face, whatever their age, wasn’t plastered with a big, fat, gleeful smile. 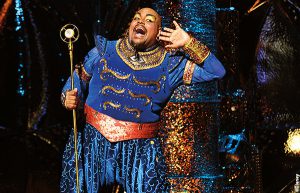 Leading the musical with a handful of glitter, a few show tunes, and a whole lot of sass, Trevor Dion Nicholas’ Genie truly stole the show – and boy, there was a lot to steal. Just as the selling point of the 1992 film was Robin Williams’ contribution as the Genie, Nicholas proves himself to be the real star of the show. He receives a louder cheer, a more thunderous applause at the show’s end than Aladdin himself, Dean John-Wilson – who still proves to be wonderful, exceptional more in his vocals than his delivery, but is still a perfect choice for the character. But it’s Nicholas who shines in every aspect, providing a welcomed sunny-side up pizazz to the tale which doesn’t even for a second edge into the realm of the cheesy – this genie is just a cool, choreographed, real life representation of the sunglasses emoji. 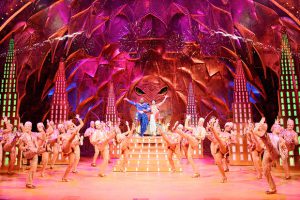 ‘Friend Like Me’ tears up the stage. Image via google.com

Speaking of choreography, every dance number is performed to near perfection, and there are more than a handful of times to catch them. Sprinkled with humour, confidence and expertise, it’s really an opportunity for the more minor characters to stand out, and several of them do. The dance number in the marketplace with Babkak, Omar, Aladdin and Kassim – a song helpfully called ‘Babkak, Omar, Aladdin, Kassim’ – proves to be a wonderful addition to the score, whilst ‘High Adventure’ in the second act solidifies Babkak, Omar and Kassim as some of our favourite characters in the show – a fitting replacement for the film’s Abu. However, no song quite matches the Genie’s big show-stopper at the end of Act One, ‘Friend Like Me’. Conjuring all the extravagance and pizazz of the spirit of Las Vegas, and the glitter and glamour of any high end Broadway show, ‘Friend Like Me’ will have you humming the song in the interval as you collect your ice cream with a grin to rival the Genie himself.

However, as gleeful and heart racingly beautiful the first act emerges as, the second act can only shrivel slightly in comparison. Seeming somewhat rushed (spoiler alert: Jafar is defeated in just one number, which takes around five minutes. I understand the events and special effects of the film can’t really be replicated for the stage – but five minutes? Just a little bit anticlimactic, don’t you think?) – with a focus more on the songs and choreography than the actual story, the show ends on a little bit of a low note. Still, ‘A Whole New World’ is stunning – seriously, if you didn’t watch it with your mouths agape and your eyes unblinking then you did it wrong – and the show ends with a standing ovation.

Aladdin isn’t perfect; I mean, living up to the film was always a dream of unattainable proportions. Saying that, it is the most enjoyable, spectacular and laugh out loud funny thing I’ve seen in a long time. A more than impressive cast leads the stage-show into the realm of the stunning, whilst the choreography shines through as stunning, as does the set. And if anything, see it for Nicholas’ performance. His casting is, shall we say, a spot of genie-us.

Aladdin continues at the Prince Edward Theatre, booking until February 2017.