Banksy has been stenciling his art throughout the UK for more than two decades. He has developed a unique and recognisable style, using a variety of mediums to manipulate the walls of our cities. His identity has remained a secret, making his work even more alluring and during the past decade, his presence has spread to all corners of the globe. His work has often commented on social problems and politically charged messages and this latest, unofficial, show exhibits his most controversial and dare mongering pieces: “War, Capitalism & Liberty”.

A group of StudioItalia students and I recently visited the show, which can be summed up as being thought provoking, humorous, ironic, eye-opening and, altogether, a captivating exhibition. Over 100 artworks are exhibited in the show, lent by private collectors. The gallery was perfectly arranged, offering a clear path to follow as you explore the three main themes. Lighting sets the mood and highlights the pieces; pieces that are hung orderly and with enough space around them so that the viewer can appreciate each individual artwork or collection, without any distractions. 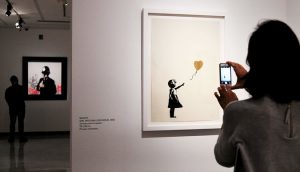 Texts are written upon the walls, both in English and Italian, which are easily legible and offer information about the artist, his works and his journey – making the exhibition a true story as you move around. The artwork on display is varied, with a range of recognisable works as well as many more which Banksy fans won’t be familiar with. As a fan of his, it was fantastic to view previously unknown material. As a spectator, Banksy’s style is extremely easy on the eye; not too much detail means that you don’t have to spend a lot of time to understand what the image is, which allows you to understand the message behind the image almost instantaneously. The majority have one or two main characters, printed boldly in black and centralised on each ‘canvas’, per se. Bright and contrasting colours are then hinted within the piece in order to highlight particular focus on an aspect of each image –  which is usually key to the central message. Such an example can be seen in “Girl With Balloon, Gold”.

The pieces centre around three eponymous themes of War, Corruption and Liberty. The title gives viewers a taste of things to come and what to expect, and allows you to understand the message of each image. The power is in its simplicity.

We spent over 40 engaging minutes exploring the themes and we found the art to be very clever and funny, and the image were well linked to what Banksy was commenting on. Whether it be issues with British politics, social problems, or the wider global issues,  such as war and capitalism and general mockery of the political situation under which we suffer, forced to sit by and watch. 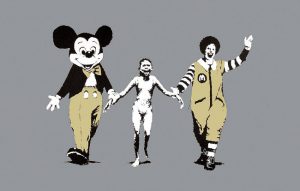 “Napalm” by Banksy [Image via artfair.co.uk]

Street art, which started off as graffiti, stems from the strong discontent felt within society. It’s fundamentally an act of protest, a peaceful protest whereby a member of society uses the city walls as a canvas to freely express the general mood of a population, and the anger felt towards the authorities and governments. Graffiti has developed hugely within the last few decades, in technique, theory and value. Place plays a key role when deciding where to paint a particular image. For example, to protest against capitalism and the mistreatment of workers from certain large companies, a street artist or writer may choose to paste their work on the walls of a supermarket or a large advertisement. They may manipulate a slogan or a recognisable logo of a company; Banksy has done this many times – once using the provocative image of the Hiroshima girl, being carried by Ronald McDonald and Mickey Mouse, to vilify the companies. Street art gives a voice to the people, without any interference from the powers that be. Until it is removed, that is. Because, of course, Street Art and Graffiti are illegal activities. But this gives such art its power.

Bearing in mind the fundamental purpose of street art and graffiti, the personal conclusion I came to about this show was one of betrayal. Walking around, I couldn’t help but feel betrayed by this exhibition, on the basis that Street Art belongs on the street! Like taking animals from the wild, and putting them on show at a zoo, it simply, by principle, isn’t right.

Please note, the artist known as Banksy is not associated or involved in this museum show,” reads a note accompanying the exhibition, which was conceived and realized by the Fondazione Terzo Pilastro-Italia e Mediterraneo, a nonprofit organization that supports projects in the arts and other fields.

Banksy, I am sure, 100% would not support this exhibition of his art. Sure, bringing street art into a gallery can be positive, because there are thousands of tourists in Rome, from all different countries, who can learn about issues in the UK, as well as appreciate the work of Banksy. It could make people value street art and, perhaps, next time they see a piece of graffiti or art around their city, they will stop and take some time to think about the message. Street art continues to be seen by many as vandalism. For it to be shown in a gallery, associated with valuable and essentially legal art, it could encourage people to feel differently about the artists, and understand that they are representing the people in the most innocent and creative way possible.

But fundamentally, placing street art in a gallery, where it is legal, alongside some critically acclaimed and highly thought-of pieces, goes completely against the movement’s cause; and therefore, its power and authenticity is lost. Many works by Banksy, displayed in this exhibition, protest against capitalism – yet, at the end of the show, you have to walk through a gift shop full of knock-off Banksy merchandise!

Overall, to the average viewer, this exhibition offers a wonderful journey through the mind of Banksy, and also explores many thought provoking narratives felt throughout the world. Humorous, intriguing, and some jaw dropping large scale pieces make this a great way to spend an afternoon. I am happy that Banksy’s work is being appreciated across waters. I cannot, however, fully support a show that doesn’t have authorisation from Banksy. Ironically, this show is similar to Street Art principles, in itself. Unauthorised, yet not needing authorisation. Paying to see art that was created for people to enjoy for free, in the street, is slightly comical.

Banksy: War, Capitalism & Liberty is at the Palazzo Cipolla Museum, Via Del Corso, Rome, from the 24th May to 4th September. Its opening hours are Monday to Sunday, 10am to 9pm.