Dark, violent, twisted, yet oh so fun. Fargo Season 2 takes everything that made the first season spectacular and turns the dial up.

Being better than it had any right to be, Noah Hawley’s Fargo (inspired by the 1996 Coen Brothers movie of the same name) debuted in 2014 to an overwhelmingly positive reception. Starring Martin Freeman, pulling off a terrific Minnesotan accent, Billy Bob Thornton, Allison Tolman, Colin (son of Tom) Hanks, and a stacked ensemble of fantastic actors, Season 1 of the black comedy-crime drama scored Emmys and Golden Globes galore, and legions of fans. It told a simple story; the story of one man, his terrible crime, the nihilistic psychopath who is neither his friend nor foe, and the colourful cast of characters who find themselves pulled into the intricate and bonkers case.

Jumping back almost 30 years in time, Season 2 had a lot riding on it; a new cast, new characters, a new time period, but perhaps most crucially, the burden of expectations brought about by a terrific first season. So does Season 2 deliver? Hell. Yes. 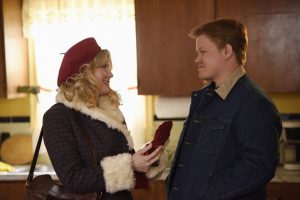 Whilst Season 1 mainly told the story of Lester Nygaard (Freeman) and Lorne Malvo (Thornton), the second season takes up a similar premise, but seems to turn every conceivable aspect of the show up to 11. It tells the main story of Peggy (Kirsten Dunst) and Ed (Jesse Plemons) Blumquist, who just so happen to be the wrong people in the wrong place at the wrong time. After Rye Gerhardt (Kieran Culkin) murders three people in a diner, he is hit by Peggy’s car, and unintentionally driven back to her house where Ed is left with no choice but to finish him off. This sinister and gory night sets off a series of events that soon engulfs the entire region. It sparks a war.

The Gerhardt family – a powerful Fargo crime syndicate primarily made up of matriarch Floyd, incapacitated patriarch Otto, sons Dodd, Bear and Rye, grandchildren Simone and Charlie, and adopted Native American dirty worker Hanzee – believe their position to be threatened by Rye’s disappearance and Otto’s stroke. With a Kansas-City based syndicate seeking to move onto the Gerhardt’s turf, a breaking point is reached and smashed to smithereens. 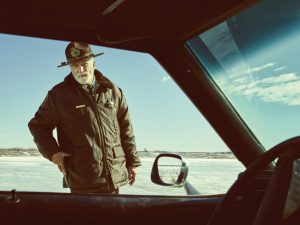 All the while, State Trooper Lou Solverson, played by Patrick Wilson and father to Allison Tolman’s Molly from Season 1, along with Hank Larsson (Ted Danson), local Sheriff and Lou’s father-in-law, do what any policemen would try to do; investigate the diner murders.

With so many moving parts and spinning plates, the show is unquestionably a modern TV epic. The writing is absolutely vital to its success and when it soars; it’s some of the best on all of TV. The dialogue is sharp, subtle, snappy and gripping. Whereas some Fargo natives speak in simplistic and grounded terms and lines (if you counted the number of “Oo yah”s, “Okay then”s and “You betcha”s spoken by the characters, then you’d be a millionaire), others are rough and to the point (mainly the Gerhardts), and others are elaborate and sophisticated (look no further than Bokeem Woodbine’s Kansas City man Mike Milligan). All of the characters feel fully fleshed out and realised through simple uses of dialogue; it’s an ingenious move on Hawley’s part to bring these characters and environments to life in such a way. In the grander scheme of things, episodes often move story and character arcs along subtly and in significant ways, again down to the phenomenal writing, allowing this show to progress and develop in such a way. The story it tells is simply fascinating and gripping. 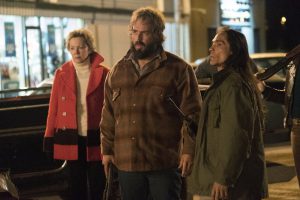 But what is an ensemble show of such enormity without a good cast? Fargo Season 2 doesn’t just feature a good cast – it’s a perfect one. Highlights include Kirsten Dunst as a spunky, cookie cutter model of the American Suburban dream, but flipped totally on its head in a complete 180 performance. Seriously, where did that performance come from?! As well as Dunst, Patrick Wilson shines in his role and continues to prove himself as one of the best actors working today. Danson is excellent alongside him, Angus Sampson provides an outstanding physical and measured performance as Bear Gerhardt, Bokeem Woodbine dives into every meaty piece of dialogue he has, and Zahn McClarnon is another fine example of physical acting at its best as Hanzee. And props must go to Nick Offerman in another Ron Swanson style performance, but amplified and based 40 years earlier than his Parks and Recreation incarnation. If the show is dialed up to 11, then Offerman is at least a 17. There’s not a bad performance among the ensemble, and not enough praise can towards the actors and the casting directors. It must be a real Sophie’s choice for who to nominate come awards season.

On top of the fantastic writing and acting, the show’s direction oozes with charisma that perfectly establishes that the show is as black a comedy as they come. The use of music is very clever; songs like ‘California Dreamin” by Bobby Womack are used at perfect moments, and there’s an excellent drum track that is used intermittently throughout the season as well. The editing and cinematography are both excellent, heightening the scope and intensity of the action scenes in particular, but also serving to help the tense standoffs and dialogues between enemies.