Read more
You are at:Home»Culture»Review: The Mikado at The Mayflower Theatre
By Samuel Williams on July 5, 2016 Culture, Theatre
80%
80
Captivating

Scottish Opera do a good job of injecting The Mikado's Victorian script with enough modernity, while maintaining many of the original features of opera.

Gilbert and Sullivan’s The Mikado is more than a comic opera in two parts, due to its fond place as a mainstay in the repertories of amateur and professional operatic societies across the country, and indeed the world, since its premiere in 1855. Scottish Opera’s production, in association with the D’Oyly Carte Opera Company (the original Gilbert and Sullivan opera company), stays true to the show’s traditional format, whilst including indications of self-awareness.

The Mikado became Gilbert and Sullivan’s most successful comic opera, running for two years at the Savoy Theatre in London. Yet, the opera’s inception was tumultuous – both Gilbert and Sullivan struggled to stay away from the paranormal elements that many of their earlier operas had relied on. Finally, inspiration was found through the new Victorian fascination with Japan, following the opening of trade links between the two countries. The Japanese setting allowed Gilbert greater scope to satirise the British establishment, whilst Sullivan continued to provide his consistent musical accompaniment to the operas. The story centres around the Japanese city of Titipu, where Nanki-Poo is desperate to win the hand of Yum-Yum, the ward of Ko-Ko. Yet they are constantly laid to waste due to the ‘topsy-turvy’ world of Gilbert’s plot.

Martin Lloyd-Evans chooses to accompany The Mikado’s spectacular overture with a nod to the ‘conjurers’ from East Asia who were all the rage in Victorian London. Baritone Richard Suart enters the stage in his guise as Ko-Ko, the Lord High Executioner of Titipu. The veteran Gilbert and Sullivan comic performer indulges the audience in a failed sawing-of-a-man-in-half trick. This framing device of the main opera’s performance creates a somewhat meta-theatre feel to the opening scene, marking a break away from the more traditional physical accompaniments to the overture. Indeed, this awareness was demonstrated by a geographically personalised poster onstage, referencing the ‘Mayflower Theatre, Southampton’, which was a nice touch. Although I feel that on stage action makes the operatic art form more accessible, the chosen technique of self-awareness wasn’t quite fitting, given that references to this concept of an ‘opera within an opera’ is never referenced again in any depth.

Throughout the rest of the opera, self-awareness was limited to the subtle hints from John Lidell’s fantastic costumes and the company’s immersive sets. The costumes merged Victorian formal fashion with Japanese attire. Pish-Tush’s (played superbly by Ben McAteer) khaki uniform with pith helmet was part colonial British explorer and part Japanese costume, with the addition of Samurai armour. The culmination of the two cultures colliding in the production would be with the arrival of ‘the Mikado’ himself. Stephen Richardson’s arrival against a backdrop of a Dreadnought-era warship was impressive, dressed overall sporting the St Andrew’s cross from the company’s native Scotland, as well as Japanese ensigns in a Mikado dressed as a naval officer in blue and gold. With make-up so intensive, one would assume that it would make Richardson’s job of conveying the Mikado impossible. This could not be further from the truth, with Richardson quickly asserting himself as the star of the show. His ability to project his signature song clearly across the music outshone the multiple incidences of numbers drowned out by the orchestra. 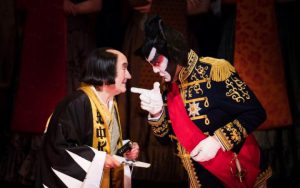 The trend of orchestral over-enthusiasm was continued through the multiple faster ‘patter’ numbers.  It was also during these numbers that the comic rapidity of the songs became juxtaposed by the extraordinarily static delivery by the performers. Given the energetic performances of both the English National Opera and the National Gilbert and Sullivan Opera Company in the same numbers, it is a surprise the SNO elected for a more stationary delivery, particularly ‘If you want to know who we are…’ and ‘The Flowers that Bloom in the Spring’. The decision for a more static performance may have been in an effort to appease the G&S traditionalists. However, in doing so, it alienated many of those in the audience not of the baby-boomer generation, especially those for whom this would be their first experience of Gilbert and Sullivan.

Stuart’s delivery of ‘As some day it may happen…’ was suitably topical, so much so that the surtitles were switched off for the entirety of the solo. As what I assume would be the first Mikado production in post-EU referendum Britain, there were numerous jibes to the ‘51.9%’ and the ‘Labour Party Trotsky’ who won’t go. This section reminds us of the continuing relevance of political satire in The Mikado, providing that it is updated and given a new lease of life before every performance – which this seemingly was. I was confused by the decision to encourage Stuart to deliver his lines in a Dick Van Dyke-esque Cockney accent, given that as soon as the orchestra struck up, he would resort to his usual received pronunciation Baritone voice.

Despite minor grievances, the Scottish Opera ensured that all of the famous numbers were delivered flawlessly. ‘Three Little Maids’ achieved a perfect balance between vocal clarity whilst not becoming too static. In particular, Rebecca Bottone as Yum-Yum and Sioned Gwen-Davies as Pitti-Sing shone through in this number; indeed, Gwen-Davies would continue to dominate the stage throughout the rest of the performance.

The production is understandably torn between appealing to the die-hard Gilbert and Sullivan fans, as well as the first time and newer audience as well. The Scottish Opera do a fantastic job of fulfilling both of these objectives by injecting the Victorian script with enough modernity, whilst maintaining many of the original features of the opera. The Scottish Opera’s production of The Mikado was an interesting take on the Victorian classic, and I look forward to their next voyage into the larger-than-life world of Gilbert and Sullivan.

The Mikado was at the Mayflower Theatre from 29th June to 2nd July.