Read more
You are at:Home»Culture»Review : The Technomancer
By Conor Kavanagh on July 1, 2016 Culture, Video Games
60%
60
Engaging

While certainly not perfect, The Technomancer proves to be a fun, mechanically sound RPG, that uses its great setting well.

The last five years have seen a huge increase in western, character driven role play games (RPG’s). The Elder Scrolls V: Skyrim and The Witcher 3 are widely regarded as two of the best games of all time and were massive commercial hits as well. These games are above and beyond the rest of the pack, but series like Dragon Age, Mass Effect, Fallout, Xenoblade are no slouches either. The quality of this genre makes the flaws in The Technomancer hard to ignore. However it still does a lot of things very well including its excellent combat. 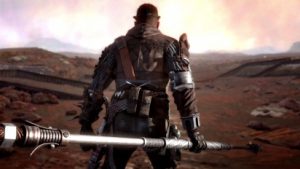 One of the most fascinating aspects of The Technomancer is the world it places you in. The game is set on Mars far in the future. The planet has been terraformed but, due to the loss of contact with Earth, corporations have set up their own states that are constantly at war with each other over resources like water. Technomancer, Zachariah Mancer, is a talented soldier from a school that raises children to be supreme warriors is enhanced with genetic mutations but values human lives so generally doesn’t kill. If this seems familiar, that’s because it is- the witchers in The Witcher series, are nearly identical to this group albeit less futuristic. The one key difference is, unlike witchers, each sect of Technomancer has an allegiance to the corporation whose territory they live in and act as their soldiers. This creates an interesting dynamic as the Technomancer fight for their faction but still isolate themselves, which draws a lot of scorn and disdain from the Mars populace. Learning about the different peoples, groups and creatures of Mars is highly enjoyable. Spider Games must be commended on this as it is hard to create an RPG world that doesn’t feel familiar.

While the lore is great The Technomancer does have some real problems. This game feels a lot lower budget than most RPG’s. The characters’ running and walking animations are extremely janky and facial animation looks like it’s from the early PS3 era. The voice acting is also hit and miss. Sometimes you hear some great dialogue from a professional voice actor, but other times you will get rushed, over the top dialogue that is really off-putting. The voice actor of the protagonist also isn’t great, but you do eventually get used to it. Far and away the worst component of The Technomancer is the graphics. Apart from a few nice bits of lighting and some pretty skies, the game looks bland and lacks any real detail. Graphics aren’t everything but The Technomancer can’t really compare to the industry’s best, or even standard, in 2016. The game also doesn’t have any proper fast travel system, apart from some links between the more distant locations, which is inexcusable in semi-open world games today. 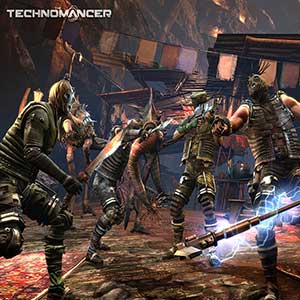 Thankfully the game does some things better than most of its counterparts. The combat is really fun, complemented by the ability to switch between three unique different forms. The most balanced form utilises the bow-staff, which allows you to engage multiple targets at once whilst performing dodges. It is most suited to dealing with mobs of enemies or lower level enemies. The second type makes use of a sword and pistol. While using this combo, you can backflip and bounce around the danger area while stabbing and shooting your foes. The downside is you can’t block but the mobility compensates for this.The final form uses a mace and a shield. This is the most defensive way to approach combat but is great when dealing with enemies with firearms or simply if you are greatly outnumbered and low on health.

All of these styles are fun but what is so impressive is that you can’t just rely on one. While fighting other Technomancers and larger enemies, you definitely have to utilise the quick attacks of the gun and sword, similarly when fighting enemies who don’t react to stun moves you have to use your shield. Coupled with the ability to coat all of your weapons in electricity as well as use the Technomancers’ special abilities (shooting bolts of lighting from their hands or using an enchanted punch attack) and you have a fun and engaging combat system that doesn’t let you become comfortable in one form of the other.

The Technomancer also has a nice approach to moral decisions that play into bigger moments in the game’s story. Each of the games many factions lose or gain respect for you based on your actions and you lose ‘karma’ if you kill any foe. Decisions are more complex than good or evil. For example, early in the game a terrorist from the slum where the protagonist grew up is now attempting to bomb a train of the corporation he servew. You can choose to let her do it or stop her. I stopped her but then you have another choice- grant her wish of a merciful death at your hands or let her be taken away and tortured by the secret police, which may make the secret police more interested in you. Multi-layered choices are something the RPG genre doesn’t do enough off. If you do not pay attention to the way a certain faction is feeling towards you, it can lead to irreversible consequences. The main narrative that is the thread for all these decisions is pretty engaging and serves as a nice backdrop to the exploration of this world’s characters and factions.

There is no shying away from the fact that The Technomancer is a significantly lower budget RPG than most on the market today. Its graphics are poor and the facial animation doesn’t accurately convey the emotions of the characters. The voice acting is serviceable with some decent performances. If you are looking for an RPG with great combat, a great setting and some interesting moral dilemma’s, The Technomancer might be for you, as long as you can look past the game’s flaws.

The Technomancer, available for PC, Xbox One and PS4, is out now.