A strong candidate for the best episode of Game of Thrones yet, 'The Winds of Winter' perfectly rounded out what has been a phenomenal season; whilst also expertly setting up the show's endgame.

David Benioff and D.B. Weiss must have known that they would be up against it with this season’s tenth and final episode, ‘The Winds of Winter’. Just last week, they provided us with what many are saying was the best hour of television history, ‘The Battle of the Bastards’ – so to satiate the fans after such an enthralling finale was always going to be a difficult task. However, they have passed it with flying colours; in fact, I think this just may be the best Game of Thrones episode of all time…

Right from the get-go this episode was all business, jam-packed with narrative progression, excellent character moments, and some phenomenal directing. In the case of the latter, look no further than the opening 20 minutes. 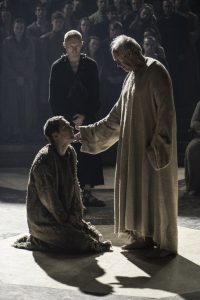 The trial of Loras Tyrell (Finn Jones), before the High Sparrow (Jonathan Pryce). [Image via IMDb].

Cersei Lannister (Lena Headey) infamously proclaimed back in Season 1: “When you play the game of thrones, you win or you die”. This has been the show’s mantra for so long now – but in this episode, it comes face to face with Cersei herself. So what does she do? She decides to utterly demolish the game. The trial of Loras Tyrell (Finn Jones), in front of both his father Mace (Roger Ashton-Griffiths) and his sister Margaery (Natalie Dormer), is incredibly powerful. He finally breaks from the brutal and systematic torture of the Faith, confessing to his ‘crimes’ in front of the High Sparrow (Jonathan Pryce). But all the while, Cersei’s sinister plan begins to unfold. As Cersei’s loyal and sadistic servant Qyburn (Anton Lesser) lures Pycelle (Julian Glover) into his little birds’ nest to his death, the realisation of a greater scheme sets in. Tommen (Dean-Charles Chapman) is confined to his room by Cersei’s muscle, Ser Gregor (Hafþór Júlíus Björnsson), with the great Sept looming in the background as proceedings there began to become more unnerving. Lancel (Eugene Simon) is sent to retrieve Cersei, but finds himself lured into her trap to helplessly witness it first hand: Wildfire, and a lot of it. His agonizing crawl towards the slowly ticking time bomb of destruction was beautifully cross-edited, as in the Sept Margaery realises what is happening, and in the Red Keep Cersei, clad in black, watches eagerly for her plan to pay off. And pay off it did. In an image reflective of demons rising from hell, the wildfire consumes the Sept and all those within, including Margaery and the High Sparrow – perhaps Cersei’s greatest enemies, culled in one swift blow. Cersei has won, and now she has the Iron Throne. Her imprisonment of Septa Unella (Hannah Waddingham) is just the cherry on the top of her victory.

But on top of this, she did manage to lose her son. One victory meant one huge loss. Tommen was always just a boy in a man’s game, and he simply could never win; in the end, he took the easy way out when he saw no more hope. But Cersei seems to show little remorse for her son, even as the ominous prophecy delivered to her as a child fulfills itself once again – but more on that a little later.

Credit must also go to the outstanding score from Ramin Djawadi, which perfectly matched the episode’s visuals. Starting with a soft piano melody, the music kept building and building, until the full orchestra crashed in as the wildfire erupted. It was the thread that held this sequence together, the linear editing meshing beautifully with it. Utterly breathtaking filmmaking. 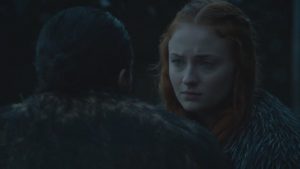 Sansa Stark (Sophie Turner), Jon Snow (Kit Harrington) and the aftermath of ‘The Battle of the Bastards’. [Image via IMDb].

But onto other events; most notably, the North. After the carnage brought about between the resurgent House Stark and the malevolent House Bolton recently, proceedings mellowed out but remained riveting. Sansa (Sophie Turner) and Jon (Kit Harington) have a quieter heartfelt moment together, as they acknowledge their need to trust each other in a world of deceit and failed allegiances. Sansa in particular has developed in huge strides this season, and this was a cap on her excellent work, as was her mature and stoic shut down of Littlefinger (Aiden Gillen). Sansa is no longer the little girl who dreamt of princes and castles; she is a strong woman who is readying herself for the wars to come. Davos (Liam Cunningham) also has ample time to shine as he progresses as a vital member of the show’s lead cast. You can feel every drop of venom in his words as he reveals Melisandre (Carice van Houten) for what she is; delusional and murderous. Her defence seemed somewhat justified (she did bring Jon back after all), but her actions can hardly be forgiven, particularly for Davos, as she took from him the one person who he truly loved and cared for. It’s yet another moral conundrum for us Thrones fans. Executed to perfection though, of course.

The inspirational and fist punching-ly triumphant recreation of the King in the North scene of the close of Season 1 sets up Jon for what is to come – especially given the much speculated and finally confirmed theory that he is the son of Lyanna, not Ned, Stark. But it’s a twist in the tale that means nothing unless Bran (Isaac Hempstead Wright) can reach him south of the Wall, again posing that all important question: Will the Starks ever reunite? With Arya (Maisie Williams) back on the shores of Westeros (side note: that was a badass and glorious victory killing for the Stark girl), the Stark family seems to be almost back to full force. 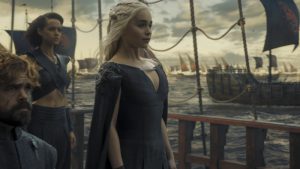 Daenerys (Emilia Clarke) also makes some significant steps forward. She has to finally drop her boy toy, Daario (Michiel Huisman), and embraces the regal queen lifestyle that she must adopt if she is to conquer Westeros. Her appointment of Tyrion (Peter Dinklage) as Hand of the Queen felt truly justified, and was a touching moment for the Lannister outcast, after his affiliation to Kings and Queens he simply did not believe in. With Dorne, Highgarden, and the Greyjoy siblings (Alfie Allen and Gemma Whelan) behind her, Daenerys seems to be on a collision course with Cersei Lannister. Will the young and beautiful queen prophesied to overthrow Cersei arrive in the form of the Mother of Dragons? One thing is for certain – heads are gonna roll.

Elsewhere, Sam’s (John Bradley) moment in the Oldtown library is a nice little personal victory for the character, as all he has ever wanted was to read, study and use his brains over his brawn. Lady Olenna (Diana Rigg) finally does what everyone has wanted for two years now, in succeeding to make Dorne actually interesting. We have a tender moment for Benjen (Joseph Mawle), as he informs Bran of his inability to pass back into the world of the living, but vows he will still fight for them; a bittersweet moment for the forgotten ranger. But he also, more intriguingly, mentioned that the White Walkers cannot enter Westeros because of the magic worked into the foundations of the wall… Will we see the collapse of the wall in Season Seven? And last but not least, Lyanna Mormont (Bella Ramsey) continues to be the most badass Lord or Lady in all Seven Kingdoms.

This was a perfect episode of Game of Thrones, and a perfect season finale. It tied up the threads of Season Six perfectly, all whilst setting up the endgame expertly. It really feels like we are coming to the final stage of what has been building for the past six seasons; and it’s gonna be epic.

Game of Thrones Season Six has now finished but is available on Now TV. Check out the ‘Inside the Episode’ feature for ‘The Winds of Winter’ below.