A refreshing and sensitive production of a Willy Russell classic.

Staging a two-man play is no safe endeavour. Nor is staging that two-man play to an intimate audience of thirty in a university seminar room – yet Theatre Group’s Educating Rita managed to triumphantly pull off both.

Willy Russell’s Educating Rita is a play which explores themes of choice, self-development, class difference and education. Set entirely in the office of middle-aged university lecturer, Frank, it focuses on his relationship with his mentee Rita, a working-class hairdresser-come-English-literature-student. The decision to set the production in a space imitating Frank’s office was both refreshing and impressive. It not only intensified the play’s action, but also cleverly captivated its audience by breaking the boundaries of traditional staging, instead incorporating aspects of the room such as its windows, door and desks. 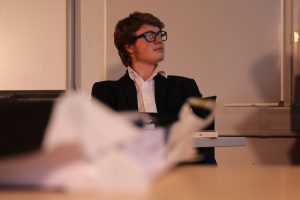 Robbie Smith’s predominantly measured and collected Frank proved a very effective take on the role. His portrayal of a university lecturer resigned to his life, quietly drowning his sorrows in a decanter of whiskey and cynicism, was remarkable. Yet his character was not all doom and gloom – indeed, Smith expertly provided many moments of comic relief in the production, with a personal highlight being his unreserved aversion to seeing ‘an amateur production’, purposefully toying with the words’ metatheatricality.

Ruthie Pinion’s debut as the dynamic Rita provided an aptly refreshing contrast to Frank. She was full of energy as she bounced around the space, filling it with her bubbly chatter, and was brilliantly true to the character. While some words were lost in these moments of fast-paced speech, praise must go to Pinion for gradually replacing this with a softer, more articulate tone, in order to demonstrate Rita’s (questionable) personal growth.

A big shout-out must go to the production team for dressing up the performance space, down to the most minute details, such as Frank’s post-it notes, reminding him to ‘MARK PAPERS’, or the actual English theory books scattered on his desk. This greatly added to the intended immersive atmosphere of the show. The door to the room also provided a realistic and convenient way of implementing scene transitions. However, many scenes began in the same way, with Smith sitting at the desk, writing, and some variation in this would not have gone amiss. Nevertheless, this did not take away from the fervour with which Pinion and Smith launched into each scene, maintaining their audience’s attention. 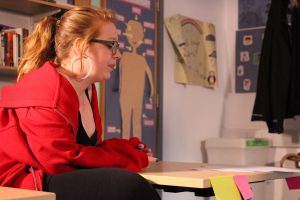 Like the set design, the directorial decisions in the production were equally precise, brilliantly highlighting the central themes of the play, and highlighting character development. For example, the scene in which Smith sat up on the window sill, in the same manner with which Pinion had sat there earlier in the play, was a powerful portrayal of Frank’s desperation to cling onto the old Rita. Likewise, when Pinion sat in Frank’s chair, and he walked in through the door, drunk, the role reversal made Rita’s (or rather Susan’s) transformation in the play palpable.

Speaking to him before the performance, Robbie Smith commented of director Will Hankey that ‘he certainly has a vision’. Hankey’s sensitivity to key moments in the play, combined with the immersive set location and realistic delivery of dialogue, categorically illustrated this vision. It was a highly intelligent production which made the lives of Rita and Frank seem very real and pressing, especially to an audience made up of largely university students. All in all, it was a great end to a great year of Theatre Group.

Educating Rita was at Building 34, and starred Robbie Smith and Ruthie Pinion. See a trailer for its film version below.