Despite a prevailing sense of anticlimax, 'No One' still features some great moments, and engaging character interactions.

Episode 8 of any Game of Thrones season can often feel like an hour-long build up to the awesomeness that is Episode 9. Still, after last year’s standout arrived early, in the form of ‘Hardhome’, it felt like HBO had decided to surprise audiences and shake up their signature dramatic structure. There was subsequently no reason to believe that this year’s eighth episode couldn’t be just as exciting and eventful as next week’s ‘Battle of the Bastards’ promises to be. Alas, ‘No One’ is actually one of the weaker instalments of this season. Which is honestly fine, because even the lesser episodes of Game of Thrones are well above average. ‘No One’ might not contain any truly shocking narrative twists, or much in the way of spectacle heavy action, but it’s still a solid piece of television, bolstered by great performances and subtler, character driven scenes.

For me, the highlight of this week was definitely the Hound. Understandably pissed after his new-found home was massacred by rogue members of the Brotherhood Without Banners, Sandor Clegane (Rory McCann, how we have missed you!) hunts the murderers down in a scene straight out of a slasher movie, interrupting some camp-fire banter, and getting his payback via grizzly axe murder. It was one of the more visceral moments we’ve had for quite some time, and it also lead to this week’s best line, as Clegane voices his frustration with one of his victims; ‘You’re shit at dying, you know that?’.

Eventually tracking down the leader of the rogue group, Clegane is irritated to learn that the Brotherhood already have them in custody and are planning to execute them via a good old fashioned hanging. Thirsty for more bloodshed, Clegane demands the right to kill the group himself, reasoning that the brotherhood’s method is too soft, and that the criminals deserve a more painful end. The ensuing back-and-forth regarding how many members the Hound is permitted to kill, and exactly how violently he is allowed to do so, was genuinely Python-esque, albeit in a good way. For a start, it was actually quite funny, and more importantly, it was perfectly in character for the bellicose warrior. Moreover, with some claiming that Season Six has seen the show go uncharacteristically tame, the Hound’s trademark cynicism and savage brutality felt weirdly reassuring and familiar. I know I certainly felt a comforting sense of nostalgia when he drove his hatchet into a man’s genitals. It just felt right. 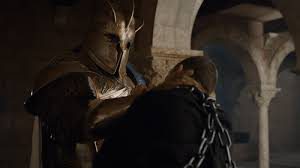 Speaking of barbarism and Cleganes, the Mountain (Hafþór Júlíus Björnsson) also got to showcase his own penchant for ferocious violence this week, going into full Predator mode and ripping off a faith-militant’s head with his bare hands. Also I think some story stuff happened. I don’t know. I was too busy gleefully giggling to notice. I do remember something about Tommen (Dean-Charles Chapman) outlawing trial by combat, but all that did was make me lament that I won’t be getting another gruesome fatality anytime soon. My desire to see more skull-crushing aside, Tommen betraying his mother was an intriguing development, and I for one can’t wait to see what Cersei (Lena Headey) and Qyburn’s (Anton Lesser) back-up plan turns out to be.

However, in terms of actual character development, the real MVP this week was obviously Jaime (Nikolaj Coster Waldau), who hasn’t been given such nuanced material since Season Three. Whilst his interactions with Brienne (Gwendoline Christie) were certainly moving, it was his confrontation with Edmure Tully (Tobias Menzies) that really stood-out. Their negotiation was one of the season’s strongest dialogue scenes, really allowing Coster-Waldau to explore the complexities of his morally ambiguous character, and also delve right back into Jaime’s darker side. It’s been some time since Jaime was able to be this intriguing, and all it took was a decent amount of screentime and some good writing. Unfortunately, the rest of the Lannister-Tully story thread was less successful, and was also wrapped up rather abruptly. Specifically, the off-screen death of the Blackfish (Clive Russell) felt oddly unceremonious, given the amount of attention he has received recently.

Speaking of bizarrely rushed developments, was something substantial cut out of the Meereen narrative? I struggle to recall another instance of jeopardy being so quickly established and then so immediately resolved. One second everyone was joking and drinking, the next the city was under attack by the masters. That was okay – after all, it was intended to be surprising and sudden. What did feel sloppy though, was Daenerys’ (Emilia Clarke) rushed entrance into the Pyramid at the scene’s close. We barely had any time to feel the city’s desperation and panic before salvation had already arrived. The fact that the dragon queen returned without saying a word also felt strangely awkward, and her facial expression resembled an annoyed parent, rather than a fearsome leader. It just came across as rushed and obligatory, like the director really wanted to go home early that day and so settled for the first take. 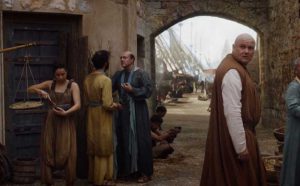 In general, everything in Essos has felt clunky for some time now, as if the writers are just trying to stall it so that Daenerys doesn’t cross the Narrow Sea too soon. What’s particularly annoying about this is the negative effect that it is having on Tyrion’s material. It wasn’t too long ago that Peter Dinklage was delivering outstanding monologues and exploring compelling dynamics with characters like Cersei and Tywin. Now he’s stuck making awkward conversation with fucking Grey Worm (Jacob Anderson)! He almost feels incidental and unnecessary at this point. Hopefully after this masters business is sorted, he’ll be able to return to form. Also, what’s with this constant effort to separate Tyrion and Varys (Conleth Hill)!? As a showrunner, why would you go out of your way to part one of the show’s most engaging double acts?

Finally, we arrive at the episode’s titular story thread, as Arya (Maisie Williams) put the Faceless Men behind her once and for all, and took on the Waif (Faye Marsay). This one was a bit of a mixed bag. On the one hand it seemed to offer a much-needed sense of progress to Arya’s narrative, yet at the same time I can’t help but wonder what has actually been achieved here. For almost two seasons we’ve watched Arya wrestle with the doctrine of this bizarre cult, struggling to put aside her own personal grudges and fully commit to discarding her own identity, in order to become a ruthless assassin. We’ve endured numerous lectures on the Many Faced God, seen Arya rebel against their creed and slowly earn their trust again, and basically put up with a tortuously slow build-up that worked to interrupt one of the show’s more interesting character arcs. And now, as a reward for all our patience, it feels as if we are right back where we were before. The only things Arya has really gained from her time in Braavos are better fighting skills and the ability to shift into Daredevil mode when it’s dark. Other than that, she’s very much the same character that she was at the end of Season Four. Which is fine, as she’s definitely one of the more enthralling protagonists – but it does make you wonder why we had to sit through so much filler to wind up here. Nevertheless, I’m excited to see where her story will go now that we’ve overcome this roadblock.

On a more positive note, the actual confrontation between Arya and the Waif did offer a well executed chase scene. HBO’s high production values obviously benefit the more overtly epic episodes like ‘Hardhome’, but even a small action sequence like this feels distinctly cinematic thanks to the professional stunt-work, vast amount of extras, and the filmic cinematography. It’s just a shame that the actual fight between the two characters occurred off-screen, especially since the Waif’s death was clearly intended to have a satisfying and cathartic effect.

Overall, ‘No One’ was a peculiar episode. Simultaneously, it felt rushed and slow. Things definitely happened, but at the same time a lot of it felt anticlimactic. I mean think about it. What did we really get from this episode? Trial by Combat isn’t happening. Brienne hasn’t secured Tully forces for Jon’s army. The Blackfish sub-plot has just sort of petered out. Arya’s back where she was two seasons ago (albeit with improved combat skills), and Daenerys has returned to Meereen after her minor inconvenience with the Dothraki. That’s a lot of things not happening, and going back to normal.

Again, I stress that none of it was bad. In fact, every scene was intrinsically of a high-quality (excluding the Meereen stuff). It just feels like things have been winding down since Episode 5, instead of properly escalating. That being said, Episode 9 is next week, and we all know that that is going to be amazing.

Game of Thrones airs in the UK on Sky Atlantic, Monday at 9pm. See a preview for next week’s episode, ‘Battle of the Bastards’, below.