It's one of those necessary episodes where not as much awesome stuff happens, in order to set up for later in the season, but the latest episode of Game of Thrones is still thoroughly enjoyable.

We’re at the halfway mark now, and the sixth season of Game of Thrones is still maintaining its breakneck pace. It’s hurtling through plotlines, setting up new ones, and managing to squish as much plot-crucial information as possible into every scene. This week is no different, and though it slows down after last week’s dramatic episode, ‘Blood of My Blood’ still packs a lot in.

We rejoin Bran (Isaac Hempstead Wright) and Meera (Ellie Kemper) as they flee through the wintry North, pursued by angry wights, only to run into someone both they, and indeed we as the viewers, don’t expect. Sam (John Bradley) and Gilly (Hannah Murray), meanwhile, arrive at Horn Hill, Sam’s family home, where Gilly and Little Sam are set to stay while (Big) Sam heads off to learn to be a Maester. We meet Sam’s family, some of whom are lovely – some of whom are less lovely. In Braavos, Arya continues to struggle with her decision to become one of the shadowy Faceless Men, while further East Daenerys does what Daenerys (Emilia Clarke) does best – give empowering, if kinda pointless, speeches. And finally, Jaime (Nikolaj Coster Waldau) and the Tyrells take on the High Sparrow (Jonathan Pryce) in King’s Landing, as the long-running religious fanatic storyline finally starts to come to a head. 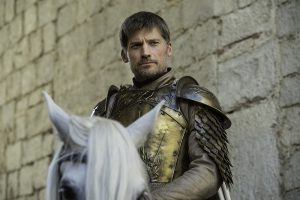 Nikolaj Coster Waldau gets his first chance to shine this week [Image: HBO]

Now that’s out the way – on to the reviewing. As an episode, and particularly as an episode in the already frenetic sixth season, where we’ve seen resurrections, enormous amounts of character development, and several brutal deaths, ‘Blood of My Blood’ isn’t the best. While plenty happens, all the happenings are kind of half-events, promising follow-up in later episodes. This may be the worst episode of the season so far, so it’s a huge credit to Game of Thrones that it’s still pretty damn good.

Bran remains the most interesting character, if only by virtue of his cryptic visions, which are even more cut up and bewildering than before, as he plunges headfirst into the ether without the Three-Eyed Raven to guide him. In King’s Landing, Nikolaj Coster-Waldau gets a chance to show his acting chops, giving a good performance as Jaime shifts between self-controlled badass and a man suddenly facing an uncertain future. The episode as a whole is well put together, though the order of the characters’ appearances could have been changed – ending with Daenerys seems like an odd choice, as she does the least this episode.

The episode’s main fault is its pacing, as Benioff and Weiss speed through the plot so quickly that some important character moments are left unexplored – particularly Bran’s reaction to the events of last episode. The fast pace might also be part of the reason that this episode feels so underwhelming; lots happens, some if which is (or could be) extremely important, but it all rushes past so fast that we barely have time to register it, or the implications it could have.

Still, though, this episode is a good one – it’s as well put together, as well acted, and as well written as any Game of Thrones episode should be.

Game of Thrones airs in the UK on Sky Atlantic, Monday at 9pm. See a preview for next week’s episode below.