A perfect example of what downloadable content can and should be, this takes everything good about Fallout 4 and builds upon it further, whilst also tweaking some of the game's flaws.

In recent times, the very concept of DLC has been greeted, at best, with widespread suspicion, and, at worst, with outright hostility. As publishers have become more and more exploitative in their methods, consumers have started to catch onto the notion that downloadable content is often nothing but a cynical cash grab, intended as a way to milk more money out of gamers. We are now accustomed to a marketplace riddled with overpriced tat in the form of ‘colour packs’, skins, flimsy excuses for new campaigns, and worst of all, hollow season passes that promise months of exciting content, and yet deliver so little. The situation has grown so bleak that games now withhold harder modes until players are willing to cough up the extra cash demanded. Worse still, many publishers shamefully carve their complete products up into smaller pieces, so that they can sell them on as ‘additions’ later on, effectively charging fans for content that they should have had all along.

It is into this desolate climate that Fallout 4’s Far Harbor expansion has entered. With a fairly hefty price tag of over $20, this could easily be yet another scam designed to rip-off gamers who are hungry for more. Thankfully, Far Harbor is anything but a lazy cash-grab – in fact, it works as an exemplary instance of just how DLC should work, complementing the main release whilst substantially adding to it. This is an add-on that in many ways surpasses the base-game, improving upon the few flaws that existed before, and daring to innovate and shake-up the formula. It is, in short, everything that consumers should be demanding from the industry. 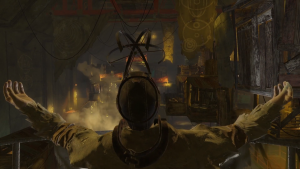 The new narrative sets in motion when Nick Valentine’s detective agency is called upon to find Kasumi, a missing girl who has ventured North to the titular island settlement of Far Harbor. There, the Lone Wanderer must track down Kasumi and attempt to bring her home. However, before they can do that, they are thrust into the midst of a complex political confrontation. Far Harbor is enveloped in a thick mist that brings with it strange and imposing monsters. Although the origin of this fog is actually grounded in science, a by-product of nuclear radiation, the townspeople regard it as an almost supernatural force. They blame the local religious fanatics, ‘The Children of Atom’, for its presence, and tensions between the two groups are high as a result. Meanwhile, a refuge for exile synthetics operates in the centre of the island, desperately trying to stay out of the conflict.

The Lone Wanderer will have to negotiate between these opposing factions, either by attempting to broker peace, or by choosing a side in the ensuing battle. Needless to say, secrets are unveiled, and dilemmas are complicated as the story progresses, but the central thrust of the narrative revolves around how the Wanderer will deal with these brewing tensions. It’s a compelling plot, one that actually offers more intrigue and complexity than Fallout 4’s original one. The conflict never feels black and white, as there are bad apples on both sides, as well as murky ethics and surprising moral conundrums.

The people of Far Harbor may initially seem bigoted and belligerent, but you soon come to understand their side of the debate. Equally, the Children of Atom are generally presented as fanatical zealots, but within the flock are good people wrestling with their own moral codes. The way that you can interact with these groups is equally complex. It’s never as simple as choosing one side and then following a linear quest-line. Instead, there is a plethora of choice, as you can try to balance allegiances, attempt to resolve tensions, outwardly declare war, or subtly undermine factions from within. 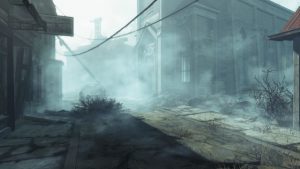 The resultant multiple endings feel very different from each other, with totally disparate outcomes and climaxes. It’s an incredible storyline, one that never feels simplistic and is impressively open-ended. Equally, the town of Far Harbor itself is filled with character. Far more eerie than the base-game’s post-apocalyptic Boston, the isolated island feels more like it belongs to a horror game like Silent Hill. It’s a truly atmospheric location, with the new musical score perfectly complimenting this change in tone.

Bethesda’s signature commitment to world-building is also present, as there’s an abundance of lore and mythology to delve into here. From the traditions of the communities, to the new creatures, everything feels detailed and well-realized. Special mention has to go to the new aquatic-themed beasties, which add a pleasing variety to combat encounters. The mutated Angler Fish are a particularly ingenious creation, disguising themselves as the local flora until they have the opportunity to strike. Being ambushed by these monsters never loses its sense of novelty.

Side-quests are similarly satisfying, with a murder scenario involving a set of aristocratic robots stealing the show. Once again, this particular mission offers you multiple options and routes to navigate, as you conduct an Agatha Christie esque investigation, questioning the suspects, searching for clues and listening to gossip. It’s easily the most unique and humorous part of the expansion, and tops almost every other side quest from Fallout 4. 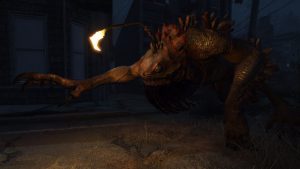 Finally, there’s an outstanding amount of new loot and equipment to be found, all of which fits in with the maritime-theme of the add-on. You’ll find old diver suits, harpoon guns, fishing pole hooks, and various other pieces of armour and weaponry. Along with this, there are new crafting options, food recipes, companions and even additional level-up perks.

The only real downside is an obnoxious puzzle mission that takes place within a computer simulation. This new gameplay element is bland and can really test your patience. Blending Minecraft and Portal mechanics may seem like a good idea on paper, but these logic puzzles are needlessly difficult to control and throw off the pacing of the overall experience. If it weren’t for the fact that there aren’t too many of them (and that most of them are optional), these segments would be severely damaging to the star rating Far Harbor would receive. You do get a nice reward for completing them all though.

All in all, Far Harbor is exactly what a large-scale expansion package should aspire to be. Firstly, it provides more of what people loved about the game itself, like excellent world building, fantastic enemy design and addictive exploration. More importantly however, it addresses some of the problems with Fallout 4, adding more gameplay variety and having the player’s choices significantly affect the narrative outcome. It offers a rare thing; both immense quality and quantity, and moreover, shows that DLC can, on occasion, offer up something meaty and worthwhile.

Far Harbor is available now on Xbox One, PS4 and PC.