‘WHAT A SHIT WEEK!’ Catherine (Sarah Lancashire) screams at the end of this episode. What a shit few months, she should be saying – in fact, what shit luck in life Catherine Cawood has had. Nothing’s happy in the Valley, at least not for our protagonist cop, as the second season of Happy Valley draws to a close.

It’s not been quite as dramatic a ride as the first season, but Season 2 has been hugely engaging. Three plot strands, tied together by Catherine, have kept us enthralled for six weeks. First, I want to talk about the serial killer plot, which was partly tied up last week in gory fashion, as Alison (Susan Lynch) made the heartbreaking decision to shoot her own son Daryl (Robert Emms) in the back of the head, following the realisation that he was behind the deaths of four prostitutes. The finale opens with Catherine discovering the messy scene, and desperately trying to pull Alison back from an overdose. It’s a heartbreaking scene between Sarah Lancashire and Susan Lynch, two stunning actresses, and allows for a few minutes of breathless drama.

Catherine’s ‘shit week’ continues with a face-off against the deranged Frances Drummond (Shirley Henderson). She forces her to hear her side of the story about what happened in the previous series, but fails to convince her that her hero Tommy Lee Royce (James Norton, still broodingly brilliant despite being in a prison for the entirety of the series) has manipulated her to his own gain. It’s a war of words between these two, despite previous scenes having seen Tommy urge Frances to kill our hero cop. Though anticlimactic, it’s actually satisfying to see Frances defeated without the need of some massive stunt. 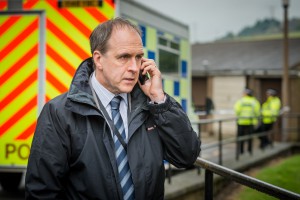 The final thread of the story is tied up in a far more dramatic fashion. Catherine comes to the realisation that one of the detectives, John Wadsworth (Kevin Doyle), is behind the murder of his lover, and gives chase, leading to a spectacular scene above a railway bridge where Catherine attempts to talk him down. With half of the police force stood watching, the stakes are high, and the suspense is gut-wrenching.

Catherine is the pin that Happy Valley hangs on. Sarah Lancashire plays her as both tough-as-nails and with huge empathy; move aside Cersei Lannister, Claire Underwood, this is the strongest woman on television. Accompanying actors – Siobhan Finneran, Kevin Doyle and Shirley Henderson in particular – are also stunning in their roles, and it truly is the characters that makes Happy Valley so successful. And can we just talk about that penultimate hospital scene between Catherine and a recovering Alison? It is surely one of the most powerful and emotive moments on TV this year. The same goes for the closing scene, as Catherine observes little Ryan with genuine fear in her eyes; fear of him turning out like his villainous father. The score to Happy Valley is brilliant, setting the hairs on your neck on edge and amplifying the drama immensely.

Now we’re just left with the agonising wait for a third series, which will doubtlessly be commissioned – at least it’ll give poor Catherine some time away from misery and bad luck.

Season Two of Happy Valley is available on BBC iPlayer for a limited amount of time.