Love has a quirky and eccentric sense of humour, but also a heart made of gold

Unlike a lot of Netflix Original Series, I hadn’t heard much (well anything) about Love before it appeared one evening when I was looking for something new to watch. It’s an enigmatic title, one which could arguably be applied to all kinds of shows, but I’m a sucker for a good romantic comedy, so I gave it a try. In the end I was pleasantly surprised to find a touching, heartwarming show, with a quirky and unique sense of humour.

Paul Rust and Gillian Jacobs star as tutor Gus and radio-station manager Mickey respectively, both of whom are unlucky in ‘love’. The pair of them simultaneously end long-term, yet dysfunctional relationships at the start of the series. In an interesting twist, they spend the entire of the first episode apart, despite their unlucky-in-love tales coming together for the viewer like a jigsaw. Then, in the concluding scene, Gus and Mickey finally meet as he offers to pay for her coffee when, after forgetting her purse, she rows with the shop assistant. 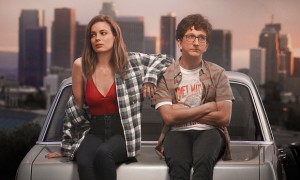 From the first two episodes, it’s unclear whether the titular ‘love’ will eventually form between Gus and Mickey. They seem to be extremely different people. Mickey is difficult, pessimistic, and if I was being critical, a little fickle, whilst Guss is socially awkward and, as described by his ex, ‘fake nice’ . However, the pair are connected by a wry sense of humour that they both share. Additionally, their friendship is believable, especially as Mickey is so accepting, and just grateful to find someone new whom she can appreciate for their differences. The standout scene of the second episode sees Gus, high on weed, throwing his beloved Blu-Rays out of the car, scoffing at their flaws (my favourite being Homeland Season 3: ‘Very confusing!’, a sentiment I completely agree with). By the end of the second episode and after an entire 30 minutes of bonding between our protagonists, I can believe that Mickey and Gus could end up with the perfect relationship; they compliment each other’s flaws, just like a real couple in ‘love’.

Special mention must go to Mickey’s new roommate, Bertie (Claudia O’Doherty), a cooky Australian who delivers the standout one liners. Her constant, unbreakable smile juxtaposes perfectly with Mickey, and despite their obvious differences, their friendship is funny and convincing. After only a few appearances in the first two episodes, I’m looking forward to seeing more of Bertie as the season continues.

What we are left with is a show unlike any that I’ve seen in a while. It doesn’t scream ‘Like me!’ as the Unbreakable Kimmy Schmidt did in its demanding way, and it’s not an earthy BBC or Channel 4 comedy like Misfits; it just is what it is. I can see many issues with it if I look at it with a magnifying glass, I just choose not to. Maybe that’s what Love, both the program and the feeling, is about – just letting yourself fall for it.

Season One of Love is available to stream now on Netflix.