On February 27th Pokemon will be turning 20 years old and, in accordance with this, there will be a re-release of the original trilogy of games; Red, Blue and Yellow. The titles will feature the same graphics, all the original Pokemon (including Mew and the famous glitch Missingno) and the same storyline, but now with wireless trading and battles. It’s fair to say that the game has developed massively over the past 20 years…

1998 – Although the original Red and Green versions of the game were released in Japan in 1996, it wasn’t until 1998 that the rest of the world got a chance to play this immensely popular phenomenon. Red, Blue and Yellow (in 1999) were revolutionary for their time. What other game do you know that offers players a choice of 150 different usable characters?  Looking back, the character sprites were occasionally poor, the story sometimes took horrific turns (looking at you Lavender Town!) and it was possible to to break the game and find virtually any Pokemon off the coast of Cinnabar Island (including some that didn’t exist…). But at the time, this game was high quality. And like all good things, it didn’t come to an end there…

2000 – A few years later, we were treated to new versions of the game: Gold, Silver and Crystal (in 2001). These featured a whole new batch of Pokemon, a whole new land to explore, new features (like the phone, Pokemon breeding, and a day and night cycle), and, most importantly, it was pretty much two games in

one. After completing the game in Johto, you could take the train back to Kanto from the original games and replay all your favourite moments with new Pokemon and improved graphics. Speaking of graphics, Crystal was the first game to have Pokemon sprites moving at the beginning of battles, which was pretty exciting stuff back in the day.

2003 – Pokemon: Ruby and Sapphire were famously the only games where you couldn’t ‘catch them all!’ (they even took that off the packaging!) and yet they were the games that I enjoyed playing the most. Yet again, we were given even more new Pokemon (some of the best in my opinion), a new land to explore, and exciting new features such as diving in the ocean, making secret bases, and changing weather. Strangely, the third game of this series, Emerald, wasn’t released until 2005.

2004 – The remake phase begins! The original games are remade as FireRed and LeafGreen. I wasn’t really that impressed by these as, apart from better graphics and colour, they were lacking in innovation. You can still catch all the Pokemon from the other games, but not until you’ve plodded through the same story you already know.

2009 – Thankfully we actually get another new game. New Pokemon, new land, new villains. Diamond, Pearl and Platinum were the first Pokemon games for the DS, and so gave us a lot of new things to do with the touch screen, while other features, like the day/night cycle, are fine tuned. I remember these games for having dozens of legendary Pokemon to track down.

2010 – Time for another remake, but this time it’s pretty good. HeartGold and SoulSilver keep all of the features of the original games they’re based on, so we still get to go to Kanto after we’re done (if you still want to after the Red/Green remakes). There’s also the added feature of having a Pokemon follow you throughout the whole game, similar to how Pikachu followed you around in the original Yellow. However, this time it can literally be any Pokemon. This is such a simple thing, and yet it makes me so happy to have a giant Lugia flying after me wherever I go!

2011 – I’ll always remember Pokemon: Black and White for the original storyline. Unlike with most other games, where you’re trying to beat the evil person who’s evil because of evil, the villains of this game are trying to liberate Pokemon from their trainers. As a Philosophy graduate, I’m always interested to see moral issues arising in games. This is also the only game where you have to catch the main legendary Pokemon. Even if you accidentally defeat it, it’ll just respawn in front of you. All of this leads up to a dramatic clash between you and the antagonist, who will be using the other titular legendary. What’s even more interesting is that this storyline is continued in Black 2 and White 2 (released the following year), which actually made the game a lot more interesting.

2013 – Pokemon X and Y were the big ones. For the first time ever, the pixilated sprite style was ditched in favour of 3D graphics. There were so many new features in this game (Mega Evolution, just to name one) and there was a lot of hype surrounding its release. It certainly did not disappoint. These games marked the new era and standard for Pokemon games. It is rumoured that there will be a third companion to these games (Pokemon Z), but it hasn’t been confirmed yet.

2014 –
The latest games to have been released are Pokemon: OmegaRuby and AlphaSapphire. These are remakes of the original Ruby and Sapphire, but with the new graphics and features of Pokemon X and Y. The storyline is different from the original, making it feel like a new game in a familiar land. It’s good to see familiar places in 3D. Hopefully they’ll go back and give Gold and Silver this treatment as well. 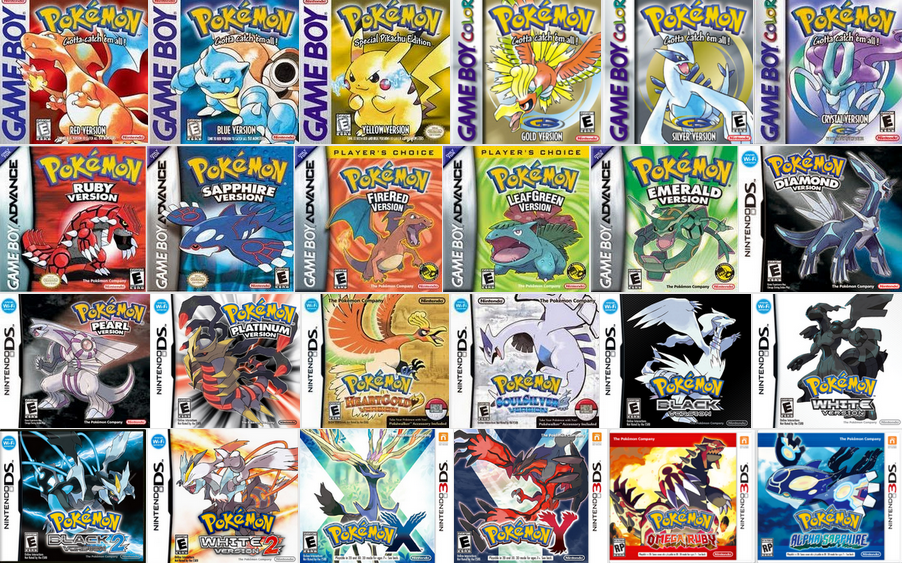 2016 – Pokemon Red, Blue and Yellow will be re-released for the 3DS. This will mark the 20th anniversary of Pokemon worldwide, an event which will be celebrated throughout the year. There are plans to give away different legendary Pokemon every month (starting with Mew, of course) and a special edition 3DS can be bought with the game’s original artwork on the cover.
So 20 years later, we have 24 main Pokemon games, 721 different Pokemon, and 6 different lands to explore. Who knows what else will have changed by the time Pokemon has its 50th anniversary.