Read more
You are at:Home»Culture»Intro to: Deadpool
By Harrison Abbott on February 8, 2016 Culture, Literature

With his own solo movie finally in sight, there has never been more attention directed at Marvel’s merc with a mouth. But what exactly do you need to know about the character before seeing the long awaited film? Not that much to be honest. Deadpool has never really had a canon in the traditional sense, as his adventures are largely unconnected slapstick narratives., He kind of has more in common with a cartoon character like Wile E. Coyote than he does most other superheroes. 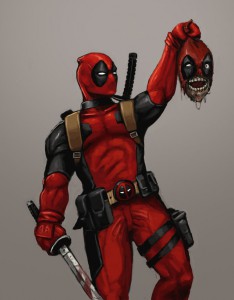 Nevertheless, there are a few stories that do flesh out his character. For instance, the 1998 Deadpool Annual divulges the anti-hero’s ridiculous origin story. As a part of the Canadian Government’s Weapon X program, Wade Wilson offers himself to radical experimentation in the hope of curing his terminal cancer. Unfortunately, there were some side effects, resulting in him being rejected from the program. He is then relegated to a superhuman ‘hospice’, which houses other patients who have similarly been branded as failures. There, he and his fellow rejects are subjected to inhumane testing and brutality for no real reason. After attracting the scorn of the hospice’s attendant through too many snide comments, Wade eventually becomes the number one target of the abuse, resulting in him becoming the top of the ‘pool’, a gambling system that has the inmates bet on which patient will be the next to expire.

However, it transpires that Wade cannot actually die. Although he was considered a failed experiment by the government, he now has a healing mutation similar to Wolverine’s, rendering him thoroughly un-killable. Wade’s inability to die causes the attendant to torture him more and more, until Wade himself wishes for death. He consequently does everything in his power to taunt the attendant; such as cracking wise, engaging in school-yard teasing, and making all sorts of immature jokes.

It is here that Deadpool is well and truly born. Because it’s not the powers that make Deadpool who he is. It’s the snarky personality. Therefore, rather than focussing on how he attained his superhuman abilities, Deadpool’s origin is solely concerned with the the beginnings of his unique persona, as Wade is as annoying as possible in an attempt to goad the attendant into ending his life. 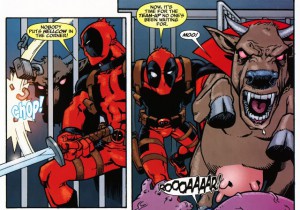 Suffice it to say, he fails on this account, but he does at least manage to break free, leading to all manner of strange adventures. From combating the reanimated corpses of past presidents, to teaming up with his own zombie head from another dimension, Deadpool’s storylines are consistently silly. And that’s what makes them so special. One highlight sees the rogue become best friends with a lesser known Howard the Duck nemesis, Hellcow. Wade instantly bonds with the villain, before accidentally eating him, all in the space of one issue. To contextualize just how bizarre this is, Hellcow is a vampiric bovine with a Bella Lugosi style cape and malevolent intentions. In other words, the perfect character for Deadpool to embark on one of his gloriously ridiculous escapades with. 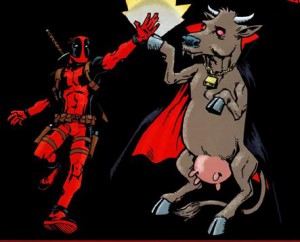 Besides the cartoonish storylines, the other USP of Deadpool is his meta, fourth-wall- breaking humour. Unlike any other hero in the Marvel universe, Deadpool is fully aware of his status as a comic book character. This leads to several inspired moments of comedy, including one conversation in which Deadpool cannot see the person he is talking to because their speech bubble is in the way. Elsewhere the character spouts pop-culture references at a mile a minute, an aspect of his persona that some may find obnoxious, but that fans adore. For example, at one point in the flagship series The Merc with a Mouth, Wade callously kills the pilot of a spaceship, just because he claimed to be a fan of the Star Wars prequels. 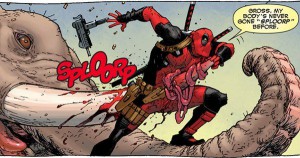 The super sweary and ultra-violent iteration of the character that the film is drawing upon didn’t come around for quite some time. Strangely enough, this new identity was only formed when sales for his series were at an all-time low. Convinced that the impending cancellation of the title granted them free reign to do whatever they wanted, the creative team pushed the boundaries and aimed for a more adult audience with the character. As a result, the Deadpool that many are familiar with was born.

There are no definitive starting points for introducing yourself to Deadpool, but that’s central to his charm. More or less every issue is a self-contained story that’s free to go in whatever crazy direction it chooses. Consequently, it’s very hard to go wrong with Deadpool. Even the weaker instalments have individual moments of ingenious creativity and striking imagination. Let’s just hope that the film will be able to tap into this and translate the character’s anarchic irreverence to the screen successfully.