The Mortal Instruments has been a great watch so far, and it would appear that the franchise is in very good hands.

In episode two of The Mortal Instruments, the relationship between Clary and Jace heats up, and does so without any of the melodrama of the book. In the TV series, Clary establishes a trust for Jace whilst maintaining a focus on their objective, and manages to succeed in holding his hand without collapsing on the floor in an eye-roll inducing puddle of fangirl. 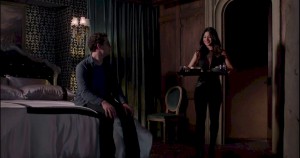 Flying in the face of the book, side characters and their romances avoid being pushed aside for the protagonist and her love life. We see more of Isabelle and Simon’s relationship here than we do in the entirety of the first three books. They establish their affection for one another convincingly, with Isabelle finding Simon’s jokes endlessly amusing and cute, and Simon beginning to form an interest in someone other than his best friend Clary.

However, Valentine continues to exhibit uncharacteristic behaviour, actively killing his own loyal henchmen and acting as insane and unhinged as possible, without even a hint of likeability. Which is odd, consider how many older characters claim to have once worked with him out of respect, a detail which is made believable in the book series, when Valentine was a silver tongued devil, paving a road to hell with good intentions.

Meanwhile episode three (‘Dead Man’s Party’) sees the introduction of two downworld characters from the books, Raphael (David Castro) and Camille (Kaitlyn Leeb). Said characters are vampires with spurious loyalties, whom our protagonists struggle to trust. Whilst Raphael seems ultimately reasonable, Camille suffers from the same treatment as Valentine’s character, in that she pursues deeply flawed logic, that only serves to make her an enemy of the protagonists for unclear reasons. Whilst Camille wasn’t a particular favourite among the fans, it’s still unfortunate to see this trope of unrelatable villains continue.

The episode also featured an enormous amount of sex appeal, far more so than the precious episodes. We see Simon become beguiled by the vampire charms of Camille, Jace teaching Clary the basics of self defence in a steamy close contact display, and Isabelle sexually manipulating the Seelie knight Meliorn (Jade Hassouné) in order to get information.

Whilst many fans have expressed disappointment that the show’s characterisation has been objectifying, especially with Isabelle, they may be jumping to conclusions. Objectification strips a character of their agency, purpose and worth, reducing them from a person and all the complexities that that implies, to a mere inanimate thing to be used. It’s worth recognising that Isabelle never lets this happen, and clearly appears to be in control in making herself attractive. In sleeping with Meliorn for information, she is single handedly advancing the plot. She gains power and knowledge, all while experiencing something she is clearly enjoying in a consensual context. The other portrayals of sexuality that the show has presented are also in line with this, which is fantastic and important, as many people often forget that fair representation of women is as much about showing positive representation of them as sexual beings, as it is about avoiding negative ones.

Shadowhunters: The Mortal Instruments is available on Netflix.