A step in the right direction, but Syndicate offers too little for the game to reach the dizzying successes of past installments.

There is currently a wrestling match going on between my brain and my heart. See, I spent the past several months getting quite excited for this game, even putting my interest in Fallout 4 to one side, just to prepare myself for its release. I was prepared to make the people who told me that I would be only be disappointed again eat their words. And all those months of taking a firm stance and reaching deep down into my excitement gland, allowing myself to become swept away by this game’s marketing, culminated in me spending £80 on the Charing Cross Edition.

So, it is with a heavy heart that I tell you that Assassin’s Creed Syndicate is… okay. It’s not bad. It’s just not particularly great either. After the series of mistakes Ubisoft had made with Unity, opinions on where Syndicate would go were all over the place, ranging from people believing it would be a completely buggy, awful installment in a series that’s shambling closer to the grave, to other people believing it would be a shining beacon of hope, ushering forth a rebirth for the Assassin’s Creed franchise. As it stands, the game is neither. Assassin’s Creed Syndicate is… alright.

I wanted to get my verdict out of the way to start with, so that anybody expecting vitriol or high praise can understand that my review is going to be a lot more boring than that. But, the verdict is useless without an actual assessment to back it up. So, as much as it pains me, I’m going to talk about how all the things in Assassin’s Creed Syndicate are… kind of okay.

So, let’s start with what’s great about the game. I’m digging the new combat system. Unity attempted to take a step away from the counter/kill-streak system of previous titles, but unfortunately gave us a sloppy mess that definitely took away the ease, but also took away the flow, the badass moves, the moment where your player character does something to someone, and you yell out ‘Holy shit!’. So, Syndicate was left with a problem. Should it go down the route of the older games, and make combat more visually appealing, but ridiculously easy? Or should it go with Unity’s approach, with more challenging combat, but which feels bland, and repetitive? Thankfully, Syndicate found a perfect middle-ground. The pacing of combat is back to what it used to be, it’s quick, it’s sleek, it’s badass, but you don’t just press one button to win. Counters now incapacitate your enemy, long enough for you string a badass sequence of attacks on them.

Graphics are gorgeous, but come on, this is Assassin’s Creed. Saying that the graphics are good is as redundant as 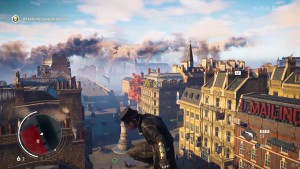 saying ‘it is a platformer’. Similarly, London is recreated very faithfully, but I will admit, it’s a lot smaller than I would have liked, especially after how big Paris was in Unity, and let’s be honest, when Unity is doing something better than you, it’s probably for the best that you try harder. That  being said, in terms of using the in-game map, they only place things on there that are immediately relevant to you, rather than cluttering it up with all sorts of icons and rubbish, which makes tracking down side-missions a hell of a lot easier.

I’d not played as much of the story as I would have liked, but the beginning definitely seems very rushed. This is evidence by how this is the first Assassin’s Creed game since our initial entry into the series, where we begin with our protagonists already being assassins. And I have strongly mixed feelings about the modern storyline. A roller-coaster of emotion occurred when I found out they were bringing back the modern storyline for this game, an aspect that had been almost completely side-lined in Unity. This was followed by renewed disappointment, when I found out it was not playable, and, in a similar vein to Unity, was relegated to just cutscenes. This disappointment soon rocketed itself back up to excitement, when I realised that Shaun and Rebecca (the two best characters in the series, thank you very much) are back!

I liked the incorporation of duel protagonists, allowing you two different types of skills for each character, with Evie’s focus being on the stealth and free-running aspects, and Jacob’s being on brawling and gang mechanics. It does add something new and refreshing to the game, and gives you a good enough motive to switch your characters up.

Yet, in terms of their actual characters, they are a bit… flat. They’re not boring, and have some interesting dimensions (I particularly enjoyed Jacob’s fixation on taking on the Templars, and Evie’s focus on finding the Pieces of Eden, and that particular conflict), but Jacob feels like Ezio, Edward and Arno again, and Evie feels like Altair, Connor and, to a lesser extent, Shay. From a narrative perspective, the use of two protagonists does little more than emphasise the fact that Ubisoft can only really write two characters – Jokey, cocky characters, and stoic, angry characters.

The new rope line mechanic is a lot of fun, but kind of makes certain parts of the game feel a tad too easy. I’d rather have had a mission where I get to climb and free-run across the Houses of Parliament (and for that mission to have come later in the game than it did). But instead, we were just told to press a button, and found ourselves at the top of Big Ben. It was a bit of a disappointment, but overall I do welcome the addition of the rope line, especially since, for the most part, it’s not compulsory, and does look cool as hell.

Driving carriages is… okay, I guess. I can’t really articulate how I feel on this one. I guess I like it? It would have been nice to have had a bit more control over the speed. Sometimes I don’t actually want to pelt full force down a street, knocking over civilians and inflicting Victorian-style carnage on everyone. Okay, that’s a lie, I always want to do that, but I’d at least appreciate the choice.

I would probably recommend this title. If you’re an Assassin’s Creed fan, you won’t exactly find anything objectionable about the content of this game. However don’t expect Syndicate to be a game-changer, don’t expect it to blow you away, and don’t even expect it to be much of an apology for Unity. It is what it is, a fun Assassin’s Creed game, that offers too much to be bad, but too little to be good.

Assassin’s Creed Syndicate is available now on Xbox One and PS4 and will be available on PC from November 19th.