With Halloween almost upon us, there’s no better time to get playing something that will really freak you out. With this in mind, our writers have brought together some of the scariest video-game enemies of all time. Some of us got a little carried away and as a result, we couldn’t fit them all into one article. So be on the lookout for the second part of this list in the near future. 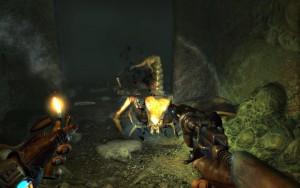 Out of all the terrifying mutant animals and insects in the Metro universe, the Spiderbugs prove to be the creepiest and scariest. A combination of scorpion and spider, these bugs cannot be killed by gunfire but have to be exposed using a light source: either the torch you carry, or your trusty lighter. In the darkest spots, these spiders will attack you in swarms and you can barely repel all of them with your light. Early on in Metro Last Light, you and your ally Pavel are chased down an abandon part of the Metro by hordes of the creatures. You then come across an immovable door. The switch to unlock it is in a giant Spiderbug nest, which Pavel FORCES you to go into alone. The disgusting nest provides plenty of dark crevices for Spiderbugs to hide and this portion of the level offers a copious amount of jump scares. With your flashlight being your sole comfort, the whole section was stomach dropping, palm-sweating horror.

Clickers- The Last of Us 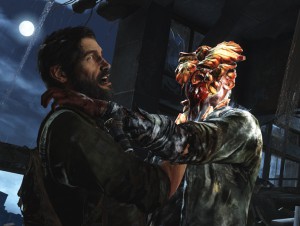 I have never felt more panicked whilst playing a game, than when being chased by The Last of Us’ dreaded Clickers. Each stage that involved sneaking around these repulsive creatures, genuinely made me feel tense and nervous about what was to come. Clickers are people that have been exposed to infection for a significant amount of time. Their appearance consists of vile fungal plates that have grown outwards through their head and have permanently impaired their vision. This loss of sight however, is made up for by their frighteningly good hearing, which they use to navigate and to detect potential prey. Although their most distinctive trait, is the disturbing clicking sound that they produce and for which they are named.

When entering a spore infested area and hearing this relentless clicking, you will need to take a minute to compose yourself, as you know that it only takes one push too far on the joystick, for Joel to make too much noise. If this happens, then a series of shrieks will ring out and a terrifying chase will ensue, one which will, more often than not, result in a cold sweat and a game over screen. 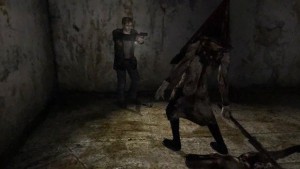 You will never find a more unnerving sequence in gaming, than when you have to navigate the dark, claustrophobic, and labyrinthine underground catacombs of Silent Hill with this guy on your tail. Over the course of the series, this iconic villain has been reduced to nothing more than a basic mascot, one who makes obligatory appearances simply because he’s the most recognizable character that the franchise has to offer. As a result, it’s easy to forget just how powerful his presence was when he was first introduced in Silent Hill 2. Aside from being intensely intimidating and visually striking, Pyramid Head is able to get under your skin in a very individualistic way. A walking reminder of James Sunderland’s guilt (for spoiler related reasons), this persistent stalker is a symbolic punishment and a reflection of James’ own perception of himself. The subtle ways he embodies James’ inner psyche and, more specifically, his attitudes towards women are numerous, but it’s worth noting that on a conventional level, he is a supremely frightening figure as well. Every encounter with this enigmatic creature is fiercely terrifying, from the first time you see him staring you down in a hallway, to the infamous mannequin -rape scene, each moment in which he appears is unforgettable. Add to that his screeching, industrial theme music, and the way he seems to be constantly pursuing you, and you have a truly scary villain. One who operates on both a primal and a psychological level. 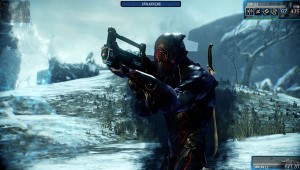 Warframe is not a horror game, maybe it’s a little dystopian, but there’s no atmosphere of suspense. Except for when it comes to one character, the Stalker. Now why is this particular character so scary? Picture this: you begin your mission – maybe something near the start of the game, or maybe a harder level later on. You’re halfway through it when suddenly the lights start to flicker. Several seconds pass and then they flicker again. Then you start getting messages from the Stalker, messages that include your username in them. The Stalker is hunting you. Are you still fighting with other enemies? You’d better hope not, because the Stalker is one of the toughest enemies in the game, and becomes extremely hard to deal with if you have to avoid lesser foes as well. It’s this combination of difficulty, the Stalker’s blood red trim and black smoky aura, the personalised way this character is trying to assassinate you, and most importantly, the lack of preparation, that makes him such a chilling character, in an otherwise predictable world. 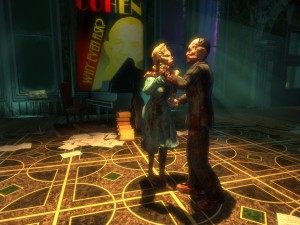 The first time (since childhood) that I paused a game because I was scared, was Bioshock and that was within the first ten minutes. I signed up for a fun FPS with super powers and the next thing I know, I’m 10,000 leagues under the sea, in a pitch black futuristic city, watching my only help’s insides being removed by a hook-handed maniac. Splicers, the residents of Rapture, were driven mad long ago by their addiction to body-changing ADAM. What makes them fantastic villains, despite being the pawns of the game, is that they have a dual purpose. While other scary shoot-em-ups upgrade their character to the point where simple enemies are dispatched with ease, and eventual boredom, Bioshock makes these characters so fascinating to simply watch and be around. So much so, that you spend longer enjoying the game, while also learning more about the world. You can hear demented conversations between them, gossiping about later or past sections of the game, or spy someone so deranged that they dance in a broken spotlight, imagining themselves to still be in their past life. The Splicers manage to add fear to the early game, and also the human element that separates Bioshock from the rest of the pack. 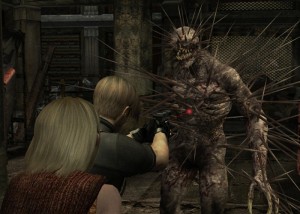 There’s a whole host of iconic enemies from this game. Whilst Dr Salvador (you know, the one with the chainsaw and the sack on his head?) might be the most recognizable of the game’s many foes, anyone who has played Resident Evil 4 knows that it’s really the heavy-breathing regenerators that are the greatest source of terror. Introduced towards the last third of the game, these slow-moving, twitchy mutants regrow any body parts that you shoot off, and can only be properly killed by destroying their parasitic weak points. The catch being that you can only see these weak points by using a thermal scope. Not only does this make them intimidating opponents, but it drastically changes up game-play. The real reason their on this list though? That horrible panting sound.