A very fun game which will be very replayable. The cost of finishing the game is the only thing pulling it down from a five star rating.

Essentially Lego Dimensions does what every child does with their toys – throw them all together to create a wacky and wonderful world, which allows for a bonkers and fun story-line. Gandalf, Wildstyle, and Batman are all thrown together when rifts appear in their individual worlds, taking their friends with them. They launch on a quest to free Metalbeard, Frodo, and Robin from the big bad guy of the game, Lord Vortech, who is searching for all of the ‘foundation elements’, which turn out to be crucial parts of each of the individual worlds that you visit. Lego Dimensions features 14 different franchises, including DC Comics, The Lord of the Rings, The Lego Movie, The Wizard of Oz, The Simpsons, Lego Ninjago, Doctor Who, Back to the Future, Portal 2, Ghostbusters, Midway Arcade, Scooby-Doo, Lego Chima and Jurassic World.

Throwing the main characters together from three of the biggest franchises was one of the best choices that Traveller’s Tales could have made. Gandalf, Wildstyle, and Batman each have their own individual skill sets, which are largely identical to their abilities in the Lego games from which they originate. This combined with the familiar set of controls, makes diving into the game feel really accessible and you can get stuck into the mishmash of worlds incredibly easily. The story takes you from world to world, as you make use of the rifts in a variety of interesting and engaging ways. From discovering hidden rifts which access things to help you, to creating mini wormholes allowing you to move to hard to access spaces, the different uses of this rift system layer upon one another as you move throughout game. As the player, you have to figure out which order you need to do each individual action in, in order to progress. 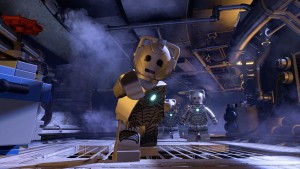 Having the actual Lego pieces to put together is intensely fun, and provoked a lot of nostalgia for me, and anyone who played with Lego as a child. From creating the portal at the start of the game, to unlocking different sets of instructions for each of the vehicles that come in the packs, the fun of putting Lego together is maintained throughout the game. However, while this is a fantastic facet of the game, the fun comes from playing as the characters and moving through these different worlds. Particular favourite levels for me are the Portal 2 and Doctor Who levels. The Doctor Who level made great use of the villains from the show – the Cybermen and Daleks are fun adversaries, and the Weeping Angels actually do creep up and surround you when the screen flashes dark. Meanwhile the Portal 2 level features exciting gameplay, and the dialogue from GLaDOS is genuinely laugh out loud funny!

The downside to this game is pretty obvious – the sheer amount of money you need to spend on the figurines to be able to complete all of the levels. With fun packs costing £14.99, and level packs/team packs costing between £24 and £30, completing the game is bound to come at a high financial cost. This is incredibly frustrating in the first play through, because you know perfectly well that mini kits are on offer, but you don’t have any of the characters yet. Something which is even more frustrating, is the staggered release schedule for the fun packs and level packs. I don’t want to have to wait until January to play as the Joker and Harley Quinn! A piece of advice for anyone who wants to play the game with minimal costs – you need to make sure that you buy the characters who can do the most in each set. The portal home screen gives you the information about the abilities each of the characters have, so you can plan out your purchases accordingly. 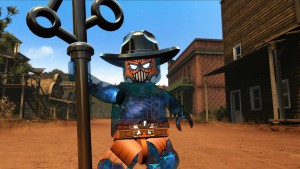 At the end of the day, Lego Dimensions is a lot of fun. The team behind it have taken all of the best parts of the previous Lego games and thrown them all together, with some great results. There is something so enjoyable about playing as Gandalf as you run around Springfield, or seeing The Doctor working together with Batman. I genuinely can’t wait to be able to play the Doctor Who level pack and open world, and I think that is what makes this game so compelling. Who doesn’t want to see some of their favorite franchises chucked together, shaken about, and in Lego form?

Lego Dimensions is available on Playstation 4, Playstation 3, Xbox One, Xbox  360, and Wii U now, with some level packs, fun packs and team packs on offer now and further packs to be released.