A little graceless with the emotion, but fans probably know what they're getting themselves into. The story isn't much, but plot-lines are tied up and mysteries are explained.

The Flash, starring Grant Gustin, focuses on the story of forensic scientist turned superhero, Barry Allen. Barry received his powers when he was struck by lighting and doused in chemicals from a particle accelerator – and so did plenty of other people. Taking on the mantle of The Flash, Barry and his team help stop these so-called metahumas week after week.

‘The Man Who Saved Central City’ opened with a dream sequence. This is one of the few pet peeves I have when it comes to television, but it was well placed here. The scene had Barry crime-fighting with his usual wonderful cast of supporting characters, including Cisco Ramon (Carlos Valdes), Iris West (Candice Patton), Caitlin Snow (Danielle Panabaker) and Eddie Thawne… as well as Harrison Wells… hang on. Didn’t those two die? In a giant wormhole? Right, yes. So as Barry wakes up, following some heavy-handed heartstring pulling, we receive a recap of how things worked last season, as well as how our characters are dealing with the finale’s fallout.

It’s been months since Eddie sacrificed himself to stop the Reverse Flash and erase his timeline from history, and The Flash has been working alone to better protect those he cares about. That’s a bit of a cliche, but let’s ignore that for now.

The Flash is being awarded the key to the city – which is, apparently, still a thing that happens – but Barry seems unwilling to accept credit for something he didn’t do, saying he’s not even the man who saved the city. We get some closure as to how the wormhole was closed. Firestorm, a metahuman made of two people, flew into the wormhole. The wormhole then split, though only one of the pair made it out. We won’t be seeing any more of Robbie Amell’s Ronnie then, though Martin Stein is sticking around.

When Barry does finally get his key, the proceedings are interrupted by one of our new villains, Al Rothstein. Dubbed the Atom Smasher, Rothstein supposedly died on the night of the particle accelerator explosion. Iris, Cisco and Stein get to work on confirming his identity and tracking him down, though Barry races off to fight him alone and nearly dies in the process.

Eventually, evil is vanquished and the band has gotten back together. Caitlin mourns Ronnie’s death, we get ominous post-mortem messages from Wells, and Barry is finally able to free his dad from jail. Also, Cisco changes the logo on Barry’s suit. It ‘pops’ more now. They really did pile it all on. 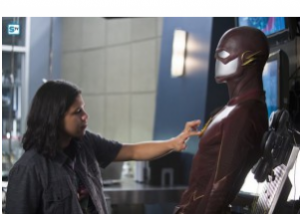 This episode was a little too much like 45 minutes of exposition for my liking, but at least it did its job. We had it explained how the finale’s wormhole was closed, and why certain characters won’t be reappearing. Plus – it definitely bolstered excitement for what’s to come. We’re starting to dabble in the multiverse, which was opened for us when characters started playing with alternate timelines. Jay Garrick – The Flash from an alternate Earth – makes his first appearance with the cheerful greeting that the world is in danger, and Cisco is coming ever closer to accepting and using his own metahuman powers.

I just want to reaffirm my love for Carlos Valdes’ Cisco. He treads a thin line with being the annoying comic relief, but never steps a toe over it. Instead he is a genuinely funny, likable character, who has excellent taste in t-shirts, and who I can’t wait to see grow into his powers. I am still bitter that several of his scenes were deleted from season one. Hopefully he will get a little more screen time as the series progresses.

The Flash is supremely easy watching. The episodes have a tendency to deliver their emotional weight with all the delicacy of dropping an anvil on your head. But what the series has always had to its credit, is that it is genuine. All the good guys are so bloody good. Perhaps that’s a little vanilla, but when so much of DC’s recent work has the characters dress in muted versions of their costumes and fight crime in a city that is literally really dark, it’s nice to see a show where that isn’t the case. Superheros! Good guys stopping bad guys! Bright red spandex!

Gustin continues to be the highlight of the show. He has the kind of puppy face which carries the somewhat blunt sentiment that the show offers, but more than that, he actually has the skill to deliver it. He’s why I don’t mind the cliche of ‘I work alone to protect people’. He makes it work, because that’s how Barry Allen thinks. I really hope that, in the future, Gustin can go on to work in projects perhaps a little more upscale than Glee, 90210 and this slightly camp superhero show. He deserves something where he can show his acting chops.

Not so fast, though. Because The Flash’s new season is off to racing start, and I can’t wait to see how far it goes.

The Flash airs on Sky1 on Tuesdays at 8pm.