Read more
You are at:Home»Culture»How to Fix: Doctor Who
By Anneka Honeyball on October 10, 2015 Culture, Television

Doctor Who returned to our screens on 19th September for its ninth series, with Peter Capaldi once again taking reign of the TARDIS controls. However, as is to be expected from something that has spanned 50 years, 12 regenerations and a countless number of storylines, there are certain aspects that certainly feel like they could be changed, or at least modified. Of course it could be argued that a show with such a vast creative output can’t really just be ‘fixed’, but there are weaknesses that could be improved upon. So here are my thoughts that, though obsolete and quite possibly controversial, could (in MY opinion) elevate the show to higher levels of enjoyment. Allonsy!

1. Moffat: Keep calm and try not to get too crazy with your storylines….

Steven Moffat is perhaps one of the most controversial figures in the world of fandom. As the showrunner of both Doctor Who and Sherlock, he is one of the most well known and revered television writers in the world right now – but the way he has maneuvered Doctor Who over the years has been somewhat troubling. Moffat was first given the reins over the show in 2010, taking over from Russell T. Davies – the man behind the series’ modern revival. And since then, Doctor Who has become many things. At the same time as becoming extremely popular in the US, it has also arguably dwindled in consistent story quality. My problem with Moffat is not necessarily with his ideas – because as past episodes such as ‘Blink’ have proved, he can come up with some truly ingenious concepts. The main problem is that, when given control over this series that he himself confesses to love so much, he becomes a little over-excited – and that creativity which was once honed by the work of others, has now been let loose – and the continuity of Doctor Who has suffered as a result. 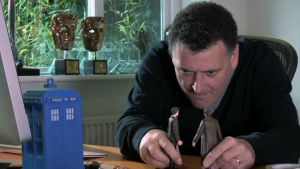 The other problem vis-a-vis Moffat, is that he seems to be getting a little unoriginal of late. ‘Dinosaurs on a Spaceship’, ‘Vikings on a Spaceship’… when will the man learn that putting something oddly historical on a space craft won’t necessarily make the show more interesting?? I know Doctor Who is supposed to excite/scare the children, but as a programme put very precisely into the family primetime slot, this bizarre sense of time-space anarchy does little to appease older viewers. Previous series have managed to engage all ages – giving us emotional character arcs, greater narratives that (very importantly) make sense and all the monsters and dangers we’ve come to expect from the Doctor’s travels. I appreciate it’s not an easy task, but if Doctor Who could get just one ounce of the crisp grandiosity that the storytelling in Sherlock so clearly gets, then it would be all the better for it.

2. With Clara on her way out, we need a new companion that won’t overshadow anything 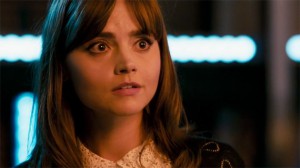 Her doe-caught-in-headlights look was getting old. (Image via BBC)

In series 8, one of the most frustrating elements for me was the extreme focus it put on Clara (Jenna Louise Coleman). Now obviously there should be some emphasis on the Doctor’s companion, as the human perspective in these alien surroundings is arguably what allows the viewer to truly understand what it’s like to travel with the Doctor. But last series just took the biscuit with how much focus it put on Clara and her sickening romance with Danny Pink. In a disappointing move, Clara’s agonisingly and annoying dilemma between staying with Danny and travelling with the Doctor quite often overshadowed the elements of the show which are arguably more important – i.e: The monsters, the aliens, the travelling and the Doctor himself. While I understand that one part of the companion’s role is to emphasise the human struggles that travelling in time and space can manifest, it should not be to the point where the Doctor is sidelined and the adventures themselves are undermined. Following the news that Coleman is (to my relief) leaving by the end of the current series, I’m hoping for a new companion who won’t step on the Doctor’s toes quite so much; Someone from whom we can gleam a far fresher human insight into this fantastical world.

3. Give the 12th Doctor an interesting story arc and don’t let ANYTHING undermine it 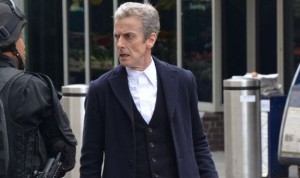 As previously mentioned, the debut of Peter Capaldi’s Doctor was undermined by the feelings of his companion – which is, to put it simply, a shame. Peter Capaldi is an incredibly complex and versatile actor, with a real passion for the material and the show itself. So please… can’t we give him something more interesting to work with? In series 8, we were given glimpses of what this regeneration of the Doctor could do – who he was and how he worked. In the upcoming series, I’d really like the emphasis to be on him. One of the benefits of saving Gallifrey and ending the guilt-torn War Doctor arc, is that it has essentially wiped the slate clean for the writers to do anything they like with this Doctor. So they need to do it. They owe it to Capaldi to give him something more than playing with the TARDIS dials and wryly commenting on Clara’s coming and goings. The Doctor is an incredibly complex character – the last series alluded to that time-old question of whether he really is a hero or not… so let’s explore that a bit more? Let’s really get into the mind of this regeneration and look at him for all his faults and wonders… WITHOUT letting anything else get in the way.

4. Missy and River are great female characters…. but please don’t ambush them with more plot twists.

It was recently announced that River Song will be returning for this year’s Christmas special. Now, while I’m not a massive fan of River and her tumultuous storyline, I will concede that Alex Kingston is flawless and deserves the very best. I’m also still not sure how I feel about Missy… but again, Michelle Gomez is brilliant. So, if we are getting more of these ladies, then fine. Go ahead. But please, please, please stop using them as plot devices to suddenly twist the story in a new direction. It worked for a while with River, but I think she’s gone through quite enough now. And as for Missy, she has reached an interesting new dynamic as this slightly ambiguous villain/companion. So let’s not change everything up too quickly. Let’s allow these ladies to simmer in their roles as they are, at least for a little while.