Read more
You are at:Home»Culture»Review: Henry IV at the Nuffield Theatre
By Natalie Fordham on September 14, 2015 Culture, Theatre
40%
40
Troubled

While the acting proves stable, the adaptation makes for a rocky foundation.

This September, Hampshire Youth Theatre, presented a brand new adaptation by Robin Belfield (Royal Shakespeare Company) which combines both Part I and Part II of William Shakespeare’s Henry IV. The two plays follow the reign of Henry IV and his dealings with rebellions that eventually lead to the Batlle of Shrewsbury. Parallel to this, the young Prince of Wales and next in line to the throne, fritters away his attention in back alleys and the taverns of London whilst surrounded by bandits. The two plays centre largely around the young Prince and his journey towards kingship and whether or not he redeems himself in the eyes of his father and the court.

HYT’s modern adaptation uses the riots of 2011 and the rise of the SNP and Green Parties as alternatives to the established order, as inspiration and mixes it with club and rave culture to create a vibrant adaptation of the Bard’s classic, one that avoids the traditional setting of the 17th century. 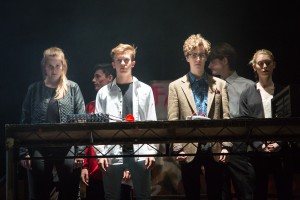 This is where the problems lie. The project has been rehearsed over two weeks as a part of a residential project. The 50-strong cast have learned quickly the disciplines of physical theatre, mime, accent and stage combat. Given this knowledge, it is safe to say the acting is not what lets this adaptation down. Indeed the leads of Alex Wilcox as Henry IV, Andy Hal as the young Prince of Wales (later Henry V) and Emil Rousseau as Hostpur, Henry Percy all prove that youth does not mean a lack of talent. These actors fall effortlessly into their roles and indeed carry the play throughout.

Despite this, the comedy within these plays holds true in one actor and his presence on stage alone, Adam Woods as Sir John Falstaff, Prince Hal’s less than noble accomplice. Woods handles the stage professionally and at all times controls the audience and their laughter. In the second half, Woods proved his worth exponentially when exploring the loss of friendship between the new Henry V and Falstaff, displaying an incredible emotional depth.

The best thing about this adaptation of Henry IV is the acting, which is always how a play should be. However, this production falls flat purely because of its modern spin. The combination of a heavy rave culture- which here seems to belong most to the 90s- clashes uncomfortably with post-2010 political conflicts. While the colour and music are well used during the rave scenes, the large cast seemed largely uncomfortable within this setting. The styling of a young Prince Hal as our modern Prince Harry again falls flat, as often his talent is not matched by others in scenes. In attempting to link the 17th century rebellions to modern day uprisings in Ukraine, Egypt and Libya, the conflict loses its integrity and merely becomes anti-establishment. Shakespeare’s plays are renowned because of the integral exploration of relations between warring characters. By attempting to expand this, HYT’s Henry IV loses its focus.

Hampshire Youth Theatre have done well to put together a group of great actors and teach them key acting skills within two weeks. Henry IV based on this merit alone is impressive. However despite this, the modern adaptation needs a further depth and a greater consideration for concrete context. Had I not been familiar with the play, I doubt the exploration of rebellion and emotional development would have carried. In short the creative thinking behind the play let the actors down.

Henry IV was performed at The Nuffield Theatre from the 3rd – 5th September.