The song you need to feel like your teenage self in the early 2000's with a modern edge. Incredible drums, guitar and Avril's unique vocals.

The award-winning icon has come back with her best single yet – ‘Bite me’. Avril Lavigne is back to save our nostalgic teenage years once and for all.

Her 2019 pop ballad ‘Head Above Water’ will be kept under water as she holds firmly onto her electric guitar with her new single; ‘Bite Me’ confirms that we are still living in the early 2000’s – and it sounds just like the “old” Avril. 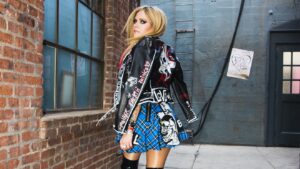 The Canadian singer, songwriter and actress may be remembered (and potentially be forgotten) in the music industry as she leaves her iconic mark from the early 2000’s pop-punk era, but it is confirmed by the pop-punk princess herself that the genre is more appreciated in today’s day and age: speaking to Zane Lowe, she said “…I’m stoked that pop-punk music, it’s coming back around right now and people are falling back in love with it. And it’s almost in a weird way, it feels bigger than ever right now.”

Her influential compilations of pop-punk singles ‘Complicated’, ‘Sk8tr Boi’ and ‘Girlfriend’ from her 2003 album Let Go was significant not just for people in the early 2000’s, but for artists now – like YungBlud and Olivia Rodrigo. By age 16, she had signed a two-album recording contract with Arista Records worth more than $2 million and is the youngest female soloist to reach number 1 at 16 years of age – she is, historically, the greatest female pop prodigy of all time. 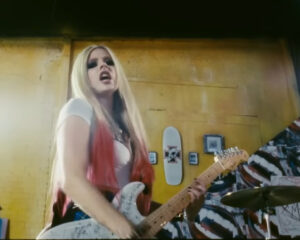 “We’re writing together and having so much fun in the studio,” she says. “We’re writing together, and we just had such a blast collaborating in the studio […] Now, I’m signed to DTA Records, which is his label, and it just felt like a natural fit it and it made sense. And I think creatively, we just click, he gets me.” It’s clear, she hasn’t aged a day since the release of ‘Complicated’.

From her experience in her past relationships and heartbreak through her 20 years of being in the music industry, she openly proclaimed that ‘love sucks!’ and brought her inspiration into her song writing from home with her team and now for the world to hear:

“Even though I’m reflecting on past stuff I’ve been through in relationships with love. Let’s face it – love’s not easy, right? And I mean I’ve been through the ringer so, yeah, I’m writing about it again… and I feel like Bite Me is kind of about a guy wanting a second chance but not giving him the time of day because, you know, you did before… It didn’t work out and having that self-respect.”

With her inspiration from her new relationship with pop-punk artist MOD SUN, her new love has helped translate her emotions throughout the album from a place of heartbreak to finding love again. She says: “I’m in a happy place in my life, and it’s fun and it reflects that.” There are plenty of light-hearted lyrics in the track: “You should’ve known better than to f*ck with someone like me”, which she wrote to get back at an ex after moving on and not giving another chance again. What makes the music video so compelling, apart from the pop-punk imagery and bold, bright colours, is her boyfriend, MOD SUN, in the video with Avril.

She happily states that, “it was just time to rock again”. The upbeat instrumentals, live drums, and guitar shape the fast-paced pop-punk song; the nostalgic voice may remain in the past for some, but there’s no doubt the sound feels like a fresh, new era and future for pop-punk.

‘Bite Me’ is out now. Watch the video here: