Read more
You are at:Home»Records»Albums»An artist transitioning into maturity: A Review of Harry Styles’ Harry’s House
By Ellie Griffiths on May 28, 2022 Albums, Records
80%
80
A work of art

This album offers something for everyone.

Harry Styles returns for the first time in three years with the release of his third album, Harry’s House, containing thirteen new songs for fans to bask in the musical brilliance of. The contents of the album itself feels like a natural, more softly spoken, continuation that progresses from Fine Line, moving ever-further away from the raspy undertones of rock that were once associated with his sound as a solo artist, marking his transition to maturity as an artist.

After having taken a few days to soak up its contents, it has dawned on me that what makes Harry Styles and his music so special is that he is a one-of-a-kind. I cannot identify a single other person in the industry at the moment who presents a similar sound in such a natural way. His lust to present himself authentically, and not follow the norm of other artists within the industry, has additionally earnt him the keys to a genre of his own which enables the facilitation of bolder and more vibrant choices – both personally and musically.

“What makes Harry Styles and his music so special is that he is a one-of-a-kind.”

The songs on Harry’s House are naturally catchy, without the need for pop gimmicks or overly flashy vocals and instrumentals. The album emits a poetic sense of calm and contentment, which makes it the perfect album for summer nights spent chilling with friends in the park, or taking a drive into the countryside with the windows rolled all the way down. It seems to seamlessly blend, which can be either a positive or negative talking point depending on your stance – I personally would prefer a few more ‘stand-out’ songs, but as a piece of artistry, I feel it perfectly conveys itself.

Despite these minor concerns, there are still a handful of songs – otenterher than already popularly received ‘As It Was’ – that have caught my attention, having been stuck in my head since the first listen of the album: ‘Grapejuice’; ‘Cinema’; ‘Daydreaming’, and ‘Satellite’. 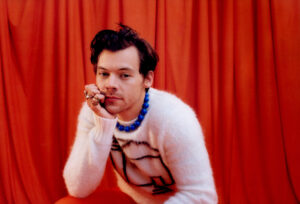 ‘Grapejuice’ is the perfect song for expressing a sense of nostalgia for any past memories that once bought an impending sense of joy to your life – a musical interpretation of the journey that a glass of wine may take you on – without the looming hangover, of course. ‘Cinema’ provides the foundations of a perfectly calming summer evening, with a transition into the chorus towards its end which has been playing automatically in my brain for days. ‘Daydreaming’ follows the same sentiments as ‘Cinema’ in terms of its catchy properties, with an added element that creates a feel-good rhythm, making you want to get up and dance around unapologetically. Meanwhile, Satellite imprints a cinematic quality, which improves an otherwise ordinary occurrence at the time of listening – it automatically makes my life feel more glamorous, with its sound teasing an element of soft rock, marking its subtle difference from the other twelve tracks on the album.

Ultimately, Harry’s House is set to be the album release of the summer, and perhaps even of the next couple of years to come. It offers a delicately charmed sense of renaissance, which artistically accentuates both the negative and positive natural push and pulls that manifest within our lives – there is a song in it for everyone, and it is absolutely perfect, if you are sick of the fast-food quality of music often heard in the charts as of late.

Harry’s House is out now via Erskine Records / Columbia. Watch the video for ‘As It Was’ below: