Read more
You are at:Home»Records»Albums»Cluttered, Fickle, Brilliant: A Review of Kendrick Lamar’s Mr. Morale & The Big Steppers
By Michal Delost on May 26, 2022 Albums, Records
65%
65
Frustratingly good

Frustrating - but maybe just about worth it.

Kendrick Lamar‘s newest full fledged release has garnered as much criticism as it has high praise for many reasons. Some call it the Compton-born rapper’s most polished work yet, while others either point to its controversial takes or patchy standards. For an album that fans have had to wait 5 long years (depending on how you read into the Kendrick-verse, this could be 4 years since the Black Panther album) this work flutters between exceeding and dropping below expectations.

Arguably, the problems start with the album cover art. It’s certainly less provocative than To Pimp a Butterfly‘s tableau of the White House, or DAMN.‘s uncanny portrait. We see Kendrick with his family standing in a faux-delapitated room donning a crown of thorns with a pistol tucked into his waistband. It’s a bit edgy and unmotivated. 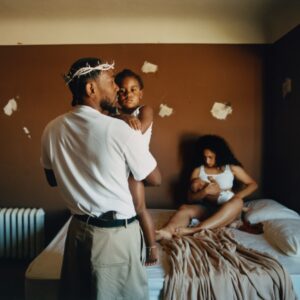 The album artwork for Mr. Morale. Image via Aftermath/Interscope Records.

Kicking off with ‘United if Grief’, the expectations are set sky high. A chilling choir sets the stage before Kendrick’s husky voice comes in reminding us just how long it has been since the release of DAMN.. The highlight of the song is the brilliant contrast of Duval Thimothy’s piano against the DnB section that reminds me of ‘Kites’ by N.E.R.D, a song on which Lamar featured, but the lyrical flow is top tier, too. We are introduced to all the most important themes from the album – therapy, individualism in contrast to culture, and the cycles in which Lamar feels trapped. It just might be the best song off the album.

From there, it is downhill for a while. Sure, ‘N95’ gets the heart racing and has some ear-wormy sections, but “What the f*** is cancel culture, dawg,”? Really? Just for the next song to feature Kodak Black? That’s not to mention the unimaginative production featuring the quickly-ageing 808s and overused trap snares. ‘Worldwide Steppers’ makes up for it, though. It is funny, dark, and actually more insightful. ‘Die Hard’ as the subsequent track might give you whiplash, but it is a fun summery song with some emotional, if simplistic, lyrics. BLXST and Amanda Reifer get awesome features, too.

This album is a very interesting album that I can only wish was more refined by trimming down some of the excess. ‘Father Time’ is certainly not guilty of this. Kendrick lets us in on his relationship with his father and how that molded him as a man. He teaches us about bitter-sweet love in a world where “bills got no silver spoon,” while still acknowledging the delicate nature of it all by shouldering some of the blame.

Kodak Black then gets a spoken word. Seperating art from artist, this interlude holds its place down well and it is quite moving. The moment you start thinking about the context, empathising with Kodak becomes a bit more difficult. The other major controversy with this album comes in ‘Auntie Diaries’ as Kendrick addresses life adjacent to the trans-experience. He drops the f-slur in a manner that almost sounds like he reminisces on the time he “knew no better,” and misuses pronouns. It is a complicated song that will be discussed extensively for years to come. Depending on your opinion of “creative license” you might hate this song, but the story that is interwoven within these lyrics has some outstanding and memorable imagery. The tone is handled cleverly, as Kendrick uses a murmur that borders on embarassment and repression. The climactic ending as we imagine Kendrick standing up for his transitioning cousin in front of Sunday school is just something unheard of in the rap industry. Kendrick is not careless in the way he uses his words, and the ending confirms the way his personal politics were usurped by realising his evolving ignorance and hypocrisy.

“Kendrick is not careless in the way he uses his words”

‘Rich Spirit’, on the other hand, highlights one of the main structural problems of this album. No matter how vibey the song sounds, the lyrical content just does not fit with the rest of the album. Same verdict goes to ‘Count Me Out’ and ‘Silent Hill’. There’s a lot of songs on this album but a few just do not add much in terms of quality. Such simplistic songs cannot be put next to totally eccentric efforts like ‘We Cry Together’, a crazy couple-therapy session that politicises the language of bickering in a very fun way. The memes it has spawned are also incredible.

Finally comes ‘Mother I Sober’, which simply might be one of Kendrick’s most heart wrenching songs ever. It is simply beautiful and so comprehensive, because it gets everything that is important to this album. The story is a family drama made with epic scale. It makes up for just about every wrong that the album has. Beth Gibbons in the chorus is ethereal. Perhaps this should’ve been the ending of the album, though ‘Mirror”s more uplifting and assured tone is welcome.

There’s a lot to dislike in Kendrick’s last Top Dawg Entertainment release. It is patchy, cluttered, has some sloppy flow and delivery, and even fickle. Very strong features, sparks of brilliance by the producers, and some of the best storytelling in the game do go a long way, however, and make it an album that you can pick-and-choose from. Very frustrating but maybe just about worth it.

Mr. Morale & The Big Steppers is out now via Aftermath / Interscope Records. Listen to ‘N95’ below: